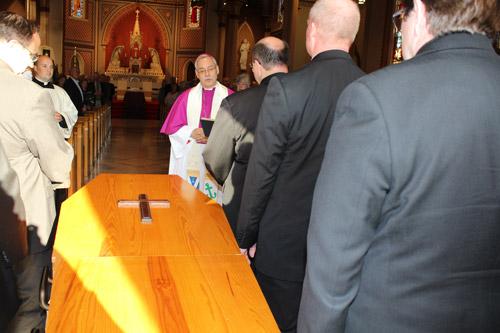 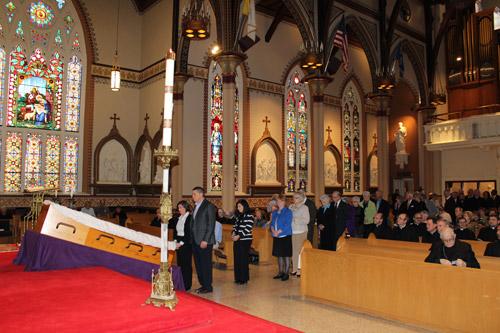 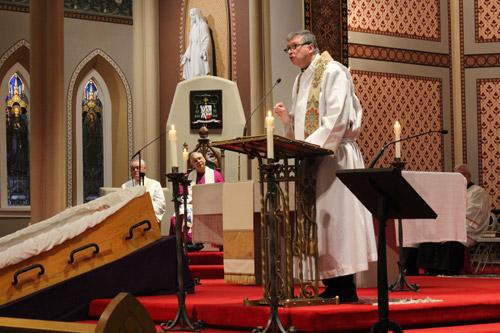 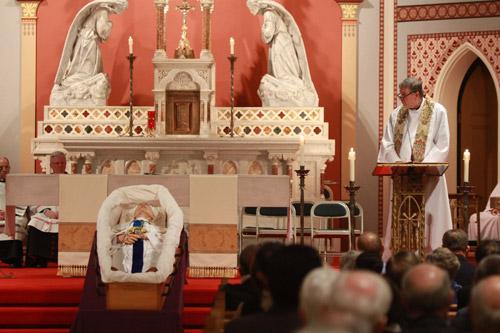 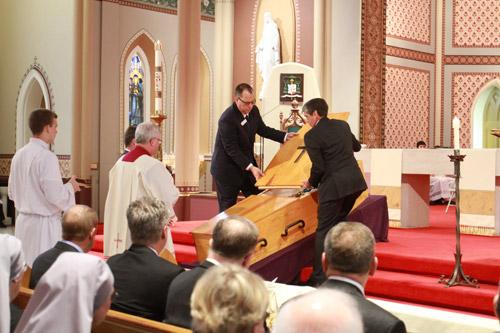 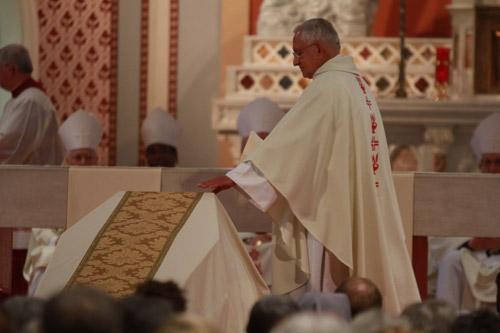 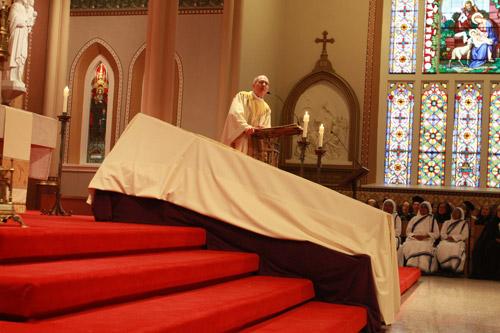 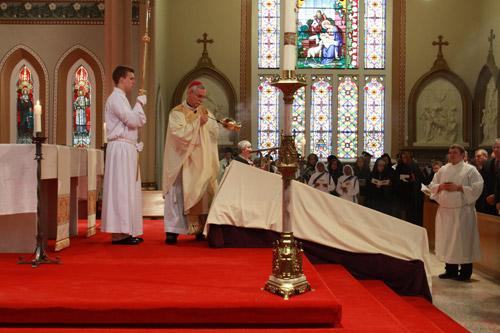 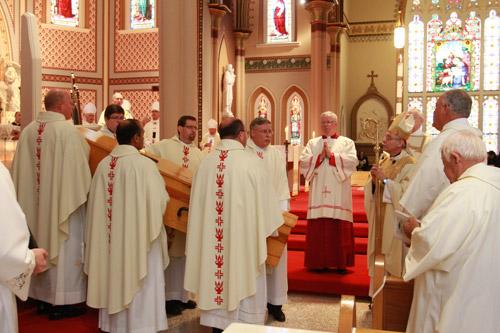 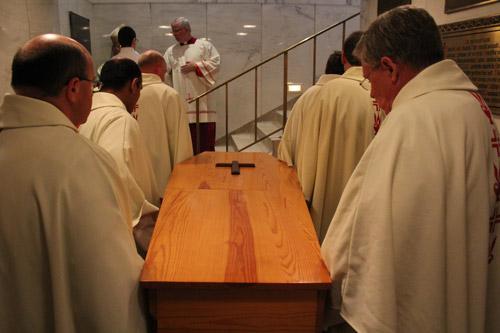 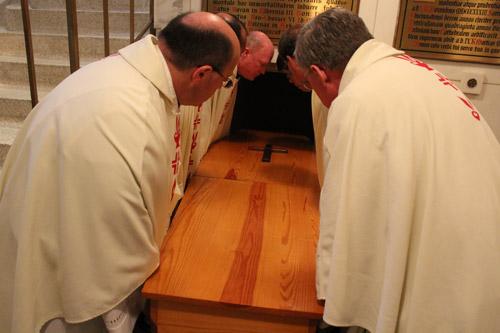 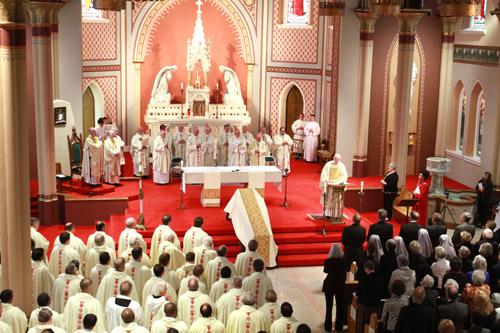 What are your touching, funny or memorable moments from Bishop McDonald's time in Arkansas? Share your stories and photos here.

The fifth bishop of the Diocese of Little Rock, Bishop Emeritus Andrew J. McDonald, was hailed by brother priests as a man consumed with love for his faith, family and flock during services April 7-8. The funeral services, which included a rosary, all-night vigil and Mass, were held at the Cathedral of St. Andrew in downtown Little Rock.

Bishop McDonald, who led the diocese from 1972 to 2000, died April 1 in Palatine, Ill. The diocese has not hosted a bishop’s funeral since Bishop Albert L. Fletcher died in 1979.

Bishop Anthony B. Taylor began the series of rites April 7 evening with the transfer of the body to the Cathedral church. Under brilliant late-day sun, seven priest pallbearers hoisted the simple, varnished wood coffin handmade by the monks of Subiaco Abbey up the front steps of the Cathedral.

The coffin was slowly brought to the front of the church to the strains of “Praise the Lord the Almighty.” The procession was led by Andrew Joseph Lee of Little Rock, named for the late bishop, who carried the processional cross followed by Father Matt Garrison, Cathedral rector, and Msgr. Francis I. Malone, pastor of Christ the King Church in Little Rock.

The bishop’s coffin was placed on a tilted bier, or platform, on the steps before the altar and the two-piece lid was removed for viewing. The full-house congregation then came forward to pay their personal respects, some genuflecting, others touching the edge of the coffin or tenderly patting the late bishop’s foot. His fellow priests each made the sign of the cross over their brother before returning to their seats.

The vigil service included readings from Wisdom 3: 1-9 read by Dennis Lee, chancellor for administrative affairs of the Diocese of Little Rock, and John 14: 1-6 read by Deacon B.J. Bowen.

In his homily, Father John Connell, pastor of St. Raphael Church in Springdale, told the gathering that Bishop McDonald was known for his love of family, the Church, his priests and his flock.

“Not only was it 65 years of priesthood and episcopacy, it was 65 years of life immersed in the living out of the truth that the Church is the bride of Christ,” he said. “It’s not only what he did for us … but at the core of all he did was all of us. He understood that the Church is the people of God. The reason for every one of his accomplishments was us, so we could understand more that Jesus was the way, the truth and the life.”

After leading the congregation in praying the rosary, Bishop Taylor added his own brief remarks, thanking the religious and clergy and leadership in Palatine, Ill., where the bishop spent his final years as chaplain for the Little Sisters of the Poor, for their care of him in his final days. He also lent an air of humor to the service — a Bishop McDonald trademark — noting he once told his predecessor that he would one day occupy the crypt next to him, to which Bishop McDonald replied, “The race is on!”

Knights of Columbus and Knights and Ladies of the Holy Sepulchre stood their post as the bishop lay in state during the all-night vigil, which concluded at 10:15 a.m. April 8. By that time, the crowd had already swelled to near-capacity in advance of the morning’s funeral Mass.

At 10:45 a.m., Msgr. Malone led a small contingent to the bishop’s coffin and oversaw North Little Rock Funeral Home employees who replaced the interior cloth and closed and secured the two lid pieces. The funeral began at 11 a.m. on the dot under cold gray skies and light rain.

On one side of the aisle, the bishop’s family and special guests took up two pews, while on the other diocesan priests and bishops filled a dozen rows. Various members of religious communities were scattered throughout the congregation. Another seven rows were filled with members of the diocesan staff.

The visiting bishops and archbishops walked two by two in the procession, each wearing a plain white miter and chasubles to match the other clergy in attendance, except for Archbishop Sartain whose garb was trimmed in gold similar to Bishop Taylor’s. Upon reaching the coffin, Bishop Taylor sprinkled it with holy water and three Missionaries of Charity sisters placed the pall upon it.

The Liturgy of the Word included Exodus 18: 13-23, read by Greg Wolfe, diocesan finance director, and I Corinthians 4:1-5, read by Sister Diane Therese of the Cross, lsp of Palatine, Ill. The Gospel was John 14:15-21, proclaimed by Deacon John Marschewski, minister to deacons.

Former vicar general under Bishop McDonald, Msgr. J. Gaston  Hebert, who now lives in Albuquerque, N.M., delivered the homily. In words alternatingly witty and poignant, he told of the times in which Bishop McDonald came to Arkansas and the enormous challenges he faced in the wake of the Second Vatican Council.

“The design of the Spirit becomes more obvious in sending this strong, intelligent, hard-headed, stubborn Irishman, capable of holding his ground and standing up for what he knew was right for our Church, right for the sheep he was sent to shepherd and what he knew in his heart was the will of God as expressed through the authority of the Church he served and loved,” he said. “Because of that, he was willing to endure the reticent, even at times ugly and disrespectful attitude of those he was trying to lead to Christ.

“Upon his arrival in the diocese, Bishop McDonald stated, ‘With God’s help and the guidance of the Holy Spirit, I will live and if necessary, I will die to prove that I care, to prove that I love,’” Msgr. Hebert continued, “This loving priest, this caring bishop brought peace to our diocese. While we Arkies had to sniff around him for a while to make sure he was genuine, he won us over, big time! Yes, he became loved and respected by laity, religious and clergy — because he kept his promise to show by his service that he loved us and cared about us.”

As he made his way back to his seat and touched the head of the coffin, the congregation gave him an extended ovation in appreciation of his remarks, closed with the singular line, “For Bishop McDonald, Lent is over. Easter has begun.”

Following Communion, Archbishop Sartain and Bishop Taylor made personal remarks on their interactions with Bishop McDonald. Archbishop Sartain relayed a well-known story of how Bishop McDonald honored his parents with every Mass, having had their wedding rings embedded on his chalice. He said the example of family devotion and love was just one of the things the late bishop taught him.

“Contrary to what you may think, there is no instruction manual for how to be a bishop,” he said in his impromptu remarks. “But I didn’t need one, I had Bishop McDonald.”

Bishop Taylor again thanked the many people who had supported the bishop in his later years, and the home-grown priests and people of the Diocese of Little Rock who assisted in his ministry, saying, “You stuck by Bishop McDonald during some very difficult days, which is part of the reason why our presbyterate is so united and faith-filled today.”

Bishop Taylor closed with his remembrance of Bishop McDonald at Archbishop Sartain’s installation as the sixth bishop of Little Rock. He said he was struck by how difficult it appeared for Bishop McDonald to let go.

“It was the only episcopal ordination I ever attended in the United States prior to my own, but even then I didn’t think bishops were supposed to talk that much about themselves on the occasion of somebody else’s ordination,” he said to laughter. “But I understand the feeling. He was walking his daughter down the aisle to give her to another man, and he loved that daughter — the Diocese of Little Rock — with all his heart.

The hymn of final commendation, “May Choirs of Angels Lead You into Paradise” was sung to the Irish tune of “Danny Boy.” Six pallbearers bore the coffin down the stairs to the white marble crypt as the congregation sang “Jesus Remember Me.” Following a short blessing and responsorial, the coffin was placed in the crypt. Bishop McDonald, like the four bishops before him, was now forever one with the Catholic faithful of Arkansas.

What are your touching, funny or memorable moments from Bishop McDonald's time in Arkansas? Share your stories and photos here.

SEE MORE PHOTOS related to this story at Arkansas Catholic's Zenfolio page, and order prints if you like. You also can browse other photos taken by Arkansas Catholic photographers.
Click for the Bishop Emeritus Andrew J. McDonald, 1923-2014 index