Meet the Petersons: One man, one woman, 780 children

Fort Smith Catholic couple have been foster, adoptive parents for the past 13 years 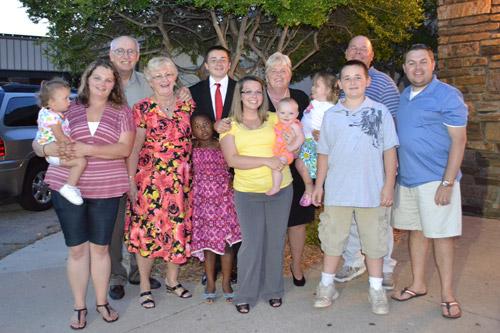 The Arkansas Division of Children and Family Services brought an 18-month-old boy to their doorstep, wearing only a diaper, covered in head lice, filth and his own feces.

Like many of the more than 780 children they have fostered since 2001, he had been rescued from an abusive home. Like many before him, the toddler only stayed for a few days as social workers looked for a long-term placement.

To the Petersons, putting six children to bed at night — two biological, one adopted, three foster — and serving breakfast for seven the next morning is an regular occurrence.

Annie Peterson is a third-generation foster parent. Her grandmother became a foster parent after raising 13 children of her own, and her mother, aunts and uncles foster parented children from the New York Foundling Home when she was growing up in Richmond Hill, N.Y. Two of Peterson’s five siblings were adopted through the home’s foster care program.

The Petersons never thought of foster parenting until Brett Peterson received a job transfer through Mac Steel 14 years ago and they moved with their four biological children to a five-acre plot in Huntington (Sebastian County), but they quickly realized their family had room to grow.

“I came from a family of six kids and have 16 nieces and nephews, so I was always used to having lots of people around,” Annie Peterson said. “Brett was open to the idea of foster parenting because he liked the idea of a large family. We started off with one or two little babies and then more started to come. We always make the decision to accept another child as partners.”

The Petersons’ two daughters are now married with children of their own — ages 2, 3, and 4. Their sons are in high school, leading busy lives but still available to help with chores and carpooling.

“They’ve always been a big help with their foster brothers and sisters,” Peterson said.

The family is currently caring for three special-needs foster children between the ages of 2 and 4. After dropping off her 9-year-old adopted daughter, Kalis, at Christ the King School, she brings her foster children to a special needs preschool program.

The family adopted Kalis, who had been their foster child since she was three weeks old, when she was 2½.

“We’re the only parents she knows,” Peterson said. “There was just something about her, something in her eyes, and we knew she was ours.”

Although it is always difficult to relinquish custody of a foster child, the Petersons are committed to seeing all of their foster children permanently placed in loving homes. They estimate that almost 95 percent of the children returned to their biological parents recycle back to them for care.

“It’s hard when we become attached to the children,” Peterson said. “If I know they’re going someplace good it makes it easier. I have cried and cried when kids have left, but I know my door’s open if they have to come back.”

The Petersons treat their foster children like their own.

“We give them love and take them to soccer, volleyball, the zoo and the circus. We go to the mall with three double strollers. I’m like the mother (who lived) in the shoe, driving a 12-passenger van around town. We bring the kids with us wherever we go,” Peterson said.

And, in the rare occasions when she is driving solo, Peterson’s van becomes her chapel.

“I talk to God in the car all the time. People think I’m listening to music,” she said. “God has put me in this position for a reason. I’m a very outgoing person and believe if I can put a smile on someone’s face I’m giving them God’s spirit. It doesn’t take a lot to make people happy — not thousands and thousands of dollars, just some time, some loving and caring. Nowadays people don’t take time for that.

“One little boy I have now just says, ‘Mama hug.’ He gives me a big smile and says, ‘Love you.’ To me it’s worth all I’ve done, no matter how bad my day has been.”

Peterson also finds time in her busy schedule to serve her parish and Kalis’s school.

“I volunteer in the TARE (Teenage Religious Education) program and will serve as Christ the King School’s PTO president next year,” she said.

Peterson is happy that several of her friends have become foster parents after seeing the joy it brings to her family.

“It’s the small things you do that make you feel so good inside,” she said.