My brother is a father, my sister is a sister

As in parishes, call to religious vocations can run in families, say sibling clergy 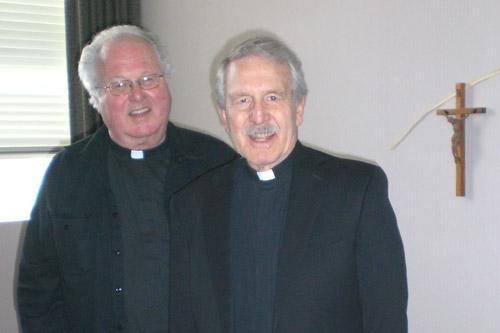 Father Josh Stengel, 34, said some of the best memories he had with his uncle were on camping, hunting and canoeing trips as a child.

While the memories are not out of the ordinary for a young boy growing up in Arkansas, it’s his uncle’s calling in life that set those experiences apart — a Benedictine monk.

“When he was just a child I was a priest at the time and we’d be out there on a Sunday and flipped the canoe over and that was the altar,” said Father Mark Stengel, OSB, from Subiaco Abbey. “We celebrated Mass on the back of a canoe on the river bank.”

For Father Josh Stengel, growing up around his uncle and extended family — which included two great-aunts who were Benedictine sisters at St. Scholastica Monastery; his father Deacon Kenny Stengel from St. Anthony Church in Ratcliff, who was ordained in 2012, and his father’s second cousin, Father Erik Pohlmeier, assistant vocations director and pastor of Our Lady of the Holy Souls in Little Rock — that made religious life a “normal” path to take.

“Having a priest in the family made that a normal thing to consider,” Father Stengel said of his ordination in July 2010. He is the administrator at St. Agnes Church in Mena.

“When I expressed some interest in that, it was supported and encouraged as a possibility, something to pray about,” he said.

The Diocese of Little Rock is home to many religious leaders in their respective vocations, but in addition to the spiritual bond every one of them shares, the family-religious bond is abundant. Families with multiple vocations have been around since the very beginning of Christianity, with the apostles Simon Peter and Andrew following Jesus together. For the Diocese of Little Rock, the occurrence has been around for many years, said Msgr. Richard Oswald, dio­cesan divine worship director, assistant director of vocations and associate pastor at St. Edward Church in Little Rock.

“The earliest brother combination that I know of was the Smyths from Ireland,” Msgr. Oswald said. “The older brother was here before the Civil War … It was Lawrence and Michael.”

Then, there was the Janesko family of Slovak: of their six children, three were priests and two sisters joined a convent. The other daughter married, Msgr. Oswald said.

“They were active in the late 1940s into the 80s,” Msgr. Oswald said. “They were all ordained to serve in the Diocese of Little Rock … That’s kind of a standout family.”

While Msgr. Oswald said it’s hard to track exactly when the most religious vocations were from the same families, it’s a trend that’s always been around.

“It seems to be kind of a constant over time,” Msgr. Oswald said. “I don’t know if you could say the old days are a whole lot different from the new days. It does seem that God works through families to call people to the priesthood.”

It’s a calling that hits close to home for Msgr. Oswald. Growing up in Little Rock in a family of seven children, Oswald became the second brother to become a priest and was ordained on May 29, 1965. He will celebrate 50 years as a priest next year, a milestone his brother Father John Oswald passed in 2011.

“The Church is a very important part of our lives. Our parents nudged us toward the idea of service. They were quick to volunteer us to help out” at church, Msgr. Oswald said. “We were always just a couple of walking blocks from the church. We could go to daily Mass, be altar servers, things like that. The church was very much a part of our life both for worship and social activity.”

Msgr. Oswald said in addition to his brother, who is now retired, he also had other relatives in religious vocations, including an uncle.

“It made it a lot easier for me to think that God was calling me,” to religious life, Msgr. Oswald said. “There’s something very comfortable about it, that someone knows you very well and you can talk about priestly things, ministry and the Church. You’re never alone because your brothers always have each other.”

The unique religious bond between father, son and uncle is alive and well in the Stengel family. Deacon Stengel said he and his wife made sure their children attended religious schools, prayed daily and did religious projects throughout their lives.

“Our faith life was the most important thing we could do and certainly we wanted to carry that on for them,” Deacon Stengel said of his children, adding that since he and his son share a religious vocation, it’s added a new layer to their relationship.

Father Mark Stengel said he and his brother Kenny and his other siblings were always at church and the emphasis on a spiritual life made the transition into a vocation an easy one.

“I think the main thing that was so important was family prayer every evening,” Father Mark Stengel said, which included the rosary and other prayers. “The idea of a religious vocation was promoted. My parents hoped and prayed that someone would join a vocation.”

But beyond priestly bonds, Barbara, Stephanie and Regina Schroeder are sisters in every sense of the word. They are all Benedictine nuns at St. Scholastica in Fort Smith, but before that, grew up together along with eight other siblings on a small dairy farm in Windthorst, Texas.

“We all helped with the farm chores and looked forward to playing games together, from playing baseball, marbles, pocket knife, putting puzzles together or challenging one another in throwing basketball. Two of the key players were mom and dad,” said Sister Barbara, the third oldest sibling.

In addition to the adventurous side of living in the country, a humble spirituality was always emphasized.

The sisters shared a speech their father, the late Ben Schroeder, gave to his fellow Fourth Degree Knights of Columbus a few years before his death that summed up the couple’s philosophy on vocations: “How many parents have taken their children to a day that (a) community is celebrating profession? If not, it would be wonderful if you would let the children see what it really means to offer yourself to Almighty God … it is up to parents to make big sacrifices and God will bless those who do.”

Their parents made the Catholic faith tangible and present in the family’s daily lives.

“When I was in the fifth or sixth grade, mom and dad had the family consecrated to the Sacred Heart,” Sister Stephanie said. “We each signed our name at the bottom of the picture and this picture hung on the wall in our kitchen near the family table.”

Sister Stephanie and the other siblings grew up seeing their sisters Marietta and Barbara thrive in their religious vocation.

“Mom and dad would take several of us with them to St. Scholastica’s when Sister Barbara and Sister Marietta became a novice or made profession of vows,” Sister Stephanie said. “I was attracted to the simplicity of their prayer and the hospitality of the sisters. It was so much like our family and prayer life.”

For Sister Barbara, getting to know her “sister siblings” didn’t happen until they were all in religious life.

“I was not with my sibling sisters for any specific time except when I was with a younger sister, Sister Regina, in Russellville the last four years of mission ministry,” Sister Barbara said. “It was here that I got to know her for she was only 2 ½ years old when I left home.”

Though the sisters all served in missions and parishes throughout Arkansas, Missouri and Texas, the three are all together now at St. Scholastica.

“We see each other, support one another and have a very close relationship as we were taught to have by our parents,” Sister Barbara said. “However, we were also taught to love and support everyone that we lived and worked with, especially family. All the sisters at St. Scholastica’s are family, not just siblings. Do we disagree? Yes. Do we think alike? No. We are human, we are different and we are family like any other family.”

The Diocese of Little Rock is currently thriving with 41 seminarians, Msgr. Oswald said. While the call for religious life comes from God, the support from parents and other relatives can impact the ultimate decision for one or multiple children.

“Marriage is not the only vocation. God could be calling you to the priesthood or religious life. Do not shove someone into religious life but always be willing to talk about that as an option. I think that could help a young person be more open to hearing God’s call,” Msgr. Oswald said. “If parents are pushing their children to produce a grandchild, they may not be ready to listen to the fact that God is calling. It’s not about what you want to be, but who God wants you to be. When people find where God wants them to be, they’re going to be happy.”

Click for the Vocations 2014 - Real callings for real people index