To relieve stress and enjoy life, some pastors find intriguing means of relaxation 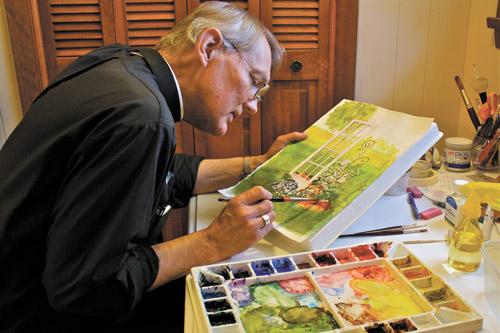 Alesia Schaefer
Msgr. David LeSieur, pastor at St. Vincent de Paul Church in Rogers, began painting at age 50 and has continued to improve his skills over the years. His paintings have been sold at auctions and given as gifts to the many who admire his work.

Alesia Schaefer
Msgr. David LeSieur, pastor at St. Vincent de Paul Church in Rogers, began painting at age 50 and has continued to improve his skills over the years. His paintings have been sold at auctions and given as gifts to the many who admire his work.

Once the chasuble comes off and the office door closes for the day, what’s a priest to do?

Apparently, there is no lack of outlets for the men in black in the diocese. Priests watch NASCAR races, cook, study languages and music, work out, play sports and collect a variety of items.

In their off time many priests have interests that would delight, inspire and surprise the faithful around the state.

“Particularly men, we seem to have to be doing something,” he said. “But for anybody, you need a diversion to help cope with things or to relieve stress.”

Father John Connell, pastor of St. Raphael Church in Springdale, is known for his acumen of recalling diocesan history, but few probably know that this skill of memorization has transcended just remembering ordinary facts and information. Father Connell has the rare and uncanny gift of recalling the top song of any given week of any given year … wait for it … for the past 44 years beginning with the year 1970.

It is an aptitude even he doesn’t profess to understand.

“My hobby is collecting and listening to pop music ‘Top 40,’ and my ability to know which song was number one for every week since 1970 is a mystery to me,” Father Connell said. “Music helps me escape and connect myself to the real world. Music has been and always will be a way to relax and relieve stress for me.”

With more than 120 gigabytes of music on his computer, Father Connell arranges his pop music by years starting in 1955, the unofficial beginning of the rock and roll era, he said, and goes through the current year. His music is classified under three sections; winter/spring, summer and fall with an estimated total of 150 to 200 songs allocated for each year.

“I started listening to music as a child in the late 50s,” Father Connell recalled. “I was listening to my parent’s dreadfully painful easy listening music as a young child, less than 5, banging pots under the dining room table. My parents thought it was cute, but I was screaming out in my mind, ‘Please stop this incredibly horrible music that you are playing … kill me now!’”

By the age of 11, Father Connell claims pop music had cemented itself in his brain.

“By 1970, age 13, I really enjoyed listening to new artists and how music was changing … for example how ‘Close To You’ by the Carpenters killed the psychedelic rock from the 60s or later in the decade, in 1979, when ‘My Sharona’ by the Knack killed disco,” he said. “People ask me how I can do it and I tell them, ‘I lived it and it is just in my head that way.’”

But it was “American Top 40” with Casey Kasem in the early 1970s that hooked Father Connell and thus began his proficiency for remembering the No. 1 songs from each and every week.  “Perhaps it’s a talent, perhaps a little nerdy, perhaps a bit autistic; who knows?” said Father Connell, who confesses he knows nothing of any other genre of music, not country, classical or religious music.

“Pop music is the soundtrack to life and that which gives me joy.”

He is also lauded for his other hobbies, Christmas decorating and model railroading with G-scale trains.

“All these hobbies help me relax and handle stress and keep a smile on my face,” Father Connell said.

Not far up the road, resides another priest with a talent that lay dormant for decades until the embers of creativity were stirred.

Msgr. David LeSieur, at the young age of 50, began painting when he felt the desire to answer an inner calling to be more creative.

“As a kid, I did a lot of drawing, but as life got busier, I let it go. I just felt a need to be able to create something that was meaningful to someone and a painting can last for years,” said Msgr. LeSieur of this hobby.

After taking an eight-week watercolor class at the Arkansas Arts Center in Little Rock, Msgr. LeSieur was asked to paint with a few other students and a parishioner who taught painting from his parish of Holy Souls. For over three years, he maintained this Monday ritual of practicing and refining his skills.

He spent the better part of the summer of 2004 working on a painting of the Old Mill in North Little Rock. Meticulously detailed down to individual stones, the painting reflects his realistic style and attention to the finer points of scenery.

Since his arrival at St. Vincent de Paul Parish in Rogers in 2006, Msgr. LeSieur has created more than 40 paintings. Each one begins with a photograph or image that he sometimes will put on a grid and then transfer to watercolor paper.

“Frequently, I paint something I want to paint, but it is usually something I know someone would like,” said Msgr. LeSieur, whose paintings include a desert monastery, Our Lady of Guadalupe, a scene at his niece’s wedding, a bench with a St. Louis Cardinal hat (his favorite baseball team) and the Blessed Mother.

“I would like to see my style evolve from realistic to becoming more impressionistic,” he admitted. “I would like to paint a little more loosely with the paintbrush and not worry as much about what I paint. For me, painting is relaxing and creative.”

Father Thessing escapes from the world altogether when immersing in his love of music and theater. He graduated from the University of Central Arkansas with a degree in music, and during his seminary days in Baltimore, would regularly steal off to New York City to take in a Broadway show or an opera.

“Puccini — he’s the master,” he said. “Anything he wrote is just terrific.”

Father Thessing also continues to play the violin, something he has indulged with local symphony groups at almost every assignment he has had as priest, including presently where the musical melting pot of Memphis beckons nearby.

Music isn’t his only interest; Father Thessing also loves crossword puzzles for the mental exercise and the way they can be sneaked into particularly dull meetings to help pass the time.  He even does the New York Times puzzle in ink, the traditional badge of an expert.

“Actually, I do it in ink so that I can see. My eyesight is terrible,” he said with a chuckle.

Two hobbies that have fallen off of late has been his love of motorcycles and pet snakes. Father Thessing has been a biker since he was 14, but said as he ages, he gets more finicky about riding in less-than-perfect conditions. He currently owns a Honda Shadow 1100 “because I’m old and I don’t want to feel the road.”

As for the reptiles, he said he’s “between snakes” right now after a python and a boa he kept for 15 years got to be 12 feet long and too much to handle. But he’s not yet done with this cuddly pursuit, either.

“Snakes are great, snakes are the ideal pet for a priest because you can feed them and then ignore them for a while and they’re just fine,” he said. “I used to take them out and drape one over my shoulders to show the (school) kids. The kids loved them, the parents hated them and the teachers were not thrilled, either.

“Someday I’ll get another snake,” he said, giggling. “They’re clean, they’re quiet and if you get lonely they’ll give you a hug.”

Another devotee to the open road is Father Tom Elliott of Immaculate Conception Church in North Little Rock. Father Elliott likes things on two wheels — both motorized and human-powered. He’s owned motorcycles for 13 years, currently a Honda ST1300 and he’s also a fan of bicycling. He has taken both vehicles cross country over the years. He and his riding companions have crisscrossed various states, most recently last fall when spent his vacation on a motorcycle ride through the Black Hills of South Dakota.

“I love aviation and the closest I can get to being a pilot is banking right and left,” he said. “That’s probably why I like so many hilly, winding roads.

“Also, being on a bike, you get to take everything in. You can smell things; you can feel the slight changes in temperature as you hit warmer or cooler air pockets. You don’t get that in a car.”

The biker in him also rubs shoulders with the budding rock star — Father Elliott has been a guitarist since ninth grade and even has four CDs to his credit.

Not wanting to shortchange his ministerial duties, he saved all of his recording work for his weekly day off, which took some of the hobby out of the activity. These days his musical work is for his own benefit or to entertain the kids at Immaculate Conception School.

He said both pursuits hold important therapeutic similarities for him.

“For the most part, my hobbies are things I have to concentrate deeply on,” he said. “When I’m on my motorcycle, I can’t be thinking about anything but what I’m doing. Strange as it sounds, that level and style of concentration is very relaxing to me.”

Dwain Hebda contributed to this article.

Click for the Vocations 2014 - Real callings for real people index