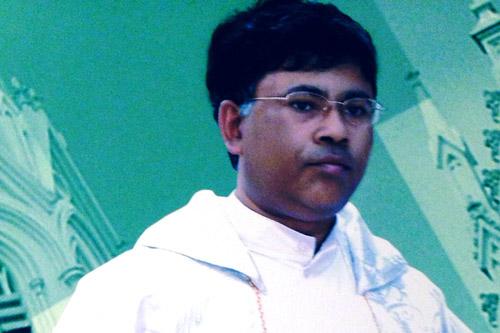 Every Lent, every Good Friday, every re-telling of the path to Calvary, Catholics pause and reflect on Jesus’ three falls. Believers are perhaps affected more by the way he got up and marched on, inextricably, toward his destiny.

Father Alphonse Gollapalli had his own three stumbles on the path to the priesthood. Not exactly a failing of faith, but every bit as serious a threat to a ministry before it even began.

“I came from a very poor family, and my parents could barely afford to send me to school,” he said of his beginnings in India. “Three times — in second grade, fifth grade and ninth grade — my father told me he could no longer afford to send me. And each time, God came and took me back to school again.”

Like the unseen hand of the Father lifting Christ to his feet, Father Gollapalli was carried by a still-unknown benefactor whose purchase of a simple notebook and other small items allowed him to stay in school. If his tender age didn’t allow him to see God at work then, it was not lost on his mother, who one day marched him to the parish priest with the simple request, “Send my son to the seminary.”

“I completed 11th grade and my father said, ‘What now? We cannot afford to send you further.’ So I thought about going to some shop to work and my mother caught my hand and walked me half a kilometer to the church,” he said. “She never asked me if I wanted to be a priest and I hadn’t thought about it. At first, I just saw seminary as a way to further my studies. I had yet to feel and touch the call of God.”

Many things came into focus at St. John’s Minor Seminary in Nellore, India, starting with at last hearing and embracing the call of Christ. Another was a mature appreciation for the faith and dignity that his late parents, Anthaiah and Elizabeth Gollapalli, displayed daily despite a hard life eking out a living for Alphonse and his five siblings.

“My faith comes from my father,” he said. “He worked in a laundry, he was a butcher, he raised chickens and ducks to sell eggs. There were eight of us, but we never once went hungry.

“When I became more knowledgeable, I told him I wanted to come home and work and help take care of them and he said, ‘The Lord gives me my daily bread and everything I need.’”

Completing his studies at St. John’s Regional Seminary in Hyderabad, Father Gollapalli was ordained April 24, 1989. In five years, he rose to rector of his minor seminary and was just settling into his first pastorate at Komarole, when he was sent to the United States in 1994. Among the many people he met as associate pastor at churches in Norman and Woodward, Okla., was an engaging diocesan priest, Father Anthony B. Taylor.

He returned to India in 1997 and for the next 14 years, he served as a pastor, director of a catechetical center and director of the diocesan social services society. Out of the blue, he heard from his friend “Father Tony” — now the bishop in Little Rock — via a request that he be allowed to return to America.

“My bishop said it was OK if I wanted to go and so in 2011, I came to Arkansas,” he said, of his arrival at Our Lady of Good Hope in Hope and, for a time, St. Martin Church in Nashville.

It was an awkward transition. Hope’s significant Hispanic population didn’t quite know what to make of a pastor who was not only non-Hispanic, but an Indian albeit one who spoke Spanish. For six long months, Father Gollapalli didn’t miss an opportunity to show how little ethnic and racial differences mattered compared to a shared faith.

“I did everything I could to show them that I was here to serve them,” he said. “I finally told them, ‘I don’t know why God called me or why he sent me from India to here. But you are in Hope and you already have faith, so it must be so that I can show you love.’ From then on, I always told them ‘I love you.’”

Father Gollapalli found another way to express his love for others. Since his days in Oklahoma, he has directed much of what he’s earned to pay for the education of his nieces and nephews, as well as other children who could not otherwise afford it. He’s shepherded some all the way through college, although he declined to say exactly how many, out of modesty.

It’s his way of repaying the anonymous gift he received those many years ago, the simple gesture that ultimately led him to his life’s work.

“I love my priesthood, I don’t have the words to tell you,” he said. “My priesthood is my being; I can’t think of not being a priest.”