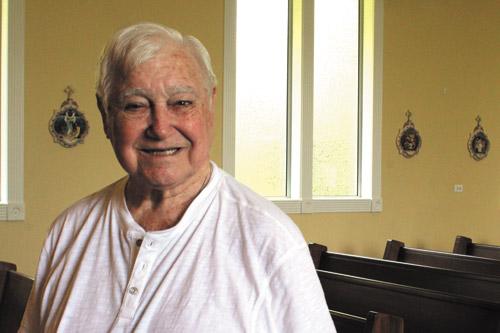 A Mass of Thanksgiving will be celebrated Tuesday, July 1 to honor four priests who are celebrating 25 and 60 years of priestly service in the Diocese of Little Rock. The Mass will begin at 5:30 p.m. at the Cathedral of St. Andrew in Little Rock with Bishop Anthony B. Taylor as the celebrant. A dinner reception will follow at McDonald Hall. All are invited to attend. The jubilarian priests are: Msgr. John O’Donnell and Father Silvio D’Ostilio, CSSp, 60 years; and Father Alphonse Gollapalli and Father Josely Kalathil, IMS, 25 years. To learn more about these priests, read Arkansas Catholic's "Jubilee: A Series in Celebration."

“I always wanted a small country church,” the pastor said. “I never thought I’d get one.”

Three years after arriving at St. Joseph, it’s hard to picture Father D’Ostilio anywhere but here. Everything from the tomato and pepper plants sprouting behind the church to the pews lined with descendants of the area’s Italian settlers represent who and what he knows and loves best.

“I feel very comfortable here,” he said. “(Congregants) would respect any priest, but I think they respect my age, my experience, my being Italian.

“I’m more Italian than they are! I know the language they don’t, I know good wine,” he said, laughing. “They do know pasta.”

Father D’Ostilio’s journey from central Italy to Center Ridge began at age 2. His mother trundled her son from the ancestral village in Pietranico Province to reunite with his father who had immigrated earlier to Connecticut. It was a reunion underpinned by tragedy; two D’Ostilio sons had died from disease during the separation and little Silvio had a close call as well.

“My mother, within two years had lost two babies and then I got the sickness too and so she was going to lose three,” he said. “She sent a prayer request to St. Anthony there in Padua and sent my picture and they put it on the altar in front of his tomb.

“I was very close to her, so I never had any problem with her asking me to go to church. And she would go a lot. I think I identified with church just by being there.”

A priest in the family was coveted in his Italian community, but his father thought him too young to enter seminary in the seventh grade. By the time he relented, at the start of his 10th grade year, the younger D’Ostillo was eager to report to minor seminary for the Holy Ghost Fathers in Bridgeport, Conn.

Although his study skills (and his English) took some work, Father D’Ostilio thrived. A year after his June 3, 1954, ordination, he landed at Catholic University in Washington earning a master’s degree in Latin and Greek. In 1960, a Fulbright scholarship paid for a summer’s special studies at American Academy in Rome.

One would think such academic achievement would make a natural teacher. His provincials of the Congregation of the Holy Spirit certainly did. From 1956 to 1970, he was assigned a string of teaching positions in Michigan and Arizona. Father D’Ostillo, however, called those years the most challenging of his priesthood.

“I did not have a gift for teaching,” he said. “I loved the kids, but I was terrible. And that caused tremendous problems to me, identity problems. My heart was really not in it.”

Making the situation worse were the tidal changes in society and the Church of that era. Shifting societal mores and Vatican II reforms clashed with the strict, authoritarian style of his order and the way in which he himself was brought up in the Church.

One bright spot was the connection he enjoyed with young people and they, in turn, sought him out as a good listener and confidant. He began to think about a counseling ministry and eventually earned a master’s degree in psychology, then provided counseling through Catholic Social Services in Phoenix.

From there, he led and built parishes in Arizona and California. The years also included a few administrative roles, but nothing compared to the pastorate. Even retirement — which he tried twice — couldn’t trump the joy of serving a congregation.

“I wasn’t done,” he said. “There were so many retired priests where I was I couldn’t even get a weekend Mass. I missed it. So I decided to retire from the retirement home.”

Today, he’s still learning and growing, focusing on the Bible and a growing interest in healing ministry. He’s profoundly grateful for having lived long enough to truly embrace the Holy Spirit as the guiding force of his life and in his vocation. At 85, he has the spark of a man who’s just getting warmed up.

“Looking back I feel accomplishment, I feel pride, I feel peace. And, I’m sorry it took so long,” he said. “I was ordained 32 years before I really settled in and said, ‘I’m a priest.’ Now I’m making up for lost time.”

A Mass of Thanksgiving will be celebrated Tuesday, July 1 to honor four priests who are celebrating 25 and 60 years of priestly service in the Diocese of Little Rock. The Mass will begin at 5:30 p.m. at the Cathedral of St. Andrew in Little Rock with Bishop Anthony B. Taylor as the celebrant. A dinner reception will follow at McDonald Hall. All are invited to attend. The jubilarian priests are: Msgr. John O’Donnell and Father Silvio D’Ostilio, CSSp, 60 years; and Father Alphonse Gollapalli and Father Josely Kalathil, IMS, 25 years. To learn more about these priests, read Arkansas Catholic's "Jubilee: A Series in Celebration."