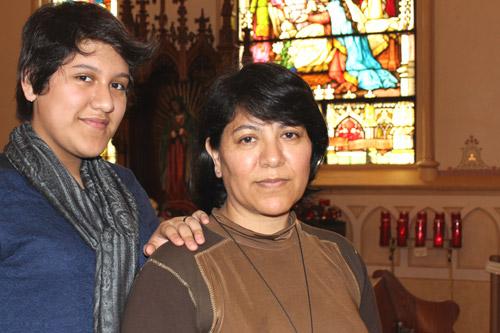 Why you want to know Manuela: A self-taught musician, Manuela is the director of St. Edward’s Hispanic choirs that sing at the parish’s Spanish Masses and various bilingual liturgies throughout the year. In 22 years she’s also become highly sought-after to perform at various Spanish religious events around the state. Last month, she and her daughter Mary Carmen sang a haunting version of the Marian Prayer following Communion at the ordination Mass for Fathers Juan Guido, Rick Hobbs III and Robert Cigainero.

In her own words:

Arkansas Catholic’s theme this year is “Tools for Discipleship.” What religious items or tools — Bible, rosary, religious books and periodicals, etc. — do you rely on regularly to inform and inspire you?

The music. I never went to school for it, but I would listen to choirs from different places, and I felt the desire in my heart to do that. I asked God to give me the gift to sing and pray and play music for him. And he did and I have been loving this since I was 14 years old.

Anyone who hears your music would find it hard to believe you never had any music education.

I only went to second grade. We didn’t have the opportunity to go to school. It’s very common (in Mexico) when you came from a big family and you live in a village, there’s a lot of work and so the children have to help to provide the food for the family. My music is a gift from God.

The song you sang at the ordination was very emotional for the new priests. How did that song come about?

When Father Guido asked for the music, it was for a song about Mary. I went to the internet with my kids, and I heard it and I felt something in my heart. I had been meditating and asking God what music I need to play that day. It was a lot of work because I was preparing music for Lent and all other programs and when Father Guido came to town and asked, “Are you ready?” I said, don’t worry, God has everything ready. But, we had been practicing that song and it wasn’t right, and I thought maybe this is not the song.

We practiced the day before and it wasn’t ready. I finally said, well, God knows what to do. When we finished, Mary Carmen touched my hand and said, “Mom, I don’t know what God did, but I think he did well.” It was a great experience.

Your son Isidro was recently accepted as a seminarian and your other children participate in your choir. How does it feel to know that by living your dream, you are also helping them grow closer to God?

When they were born, I consecrated them to God, but I never thought God would actually hold me to my word. But I feel very blessed. I see my family like a field and God can come and choose whatever he needs.