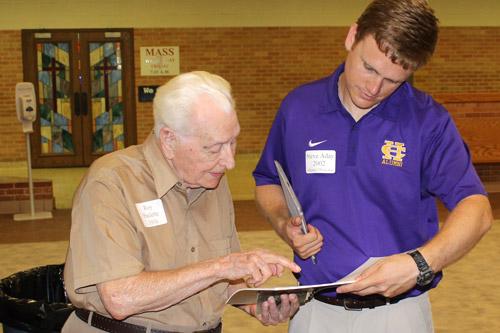 Dwain Hebda
Roy Paulet, Catholic High class of 1936, (left), shares a section from his memoirs of the school with Steve Aday, class of 2002 and alumni director, during the July 1 mini reunion.

Dwain Hebda
Roy Paulet, Catholic High class of 1936, (left), shares a section from his memoirs of the school with Steve Aday, class of 2002 and alumni director, during the July 1 mini reunion.

Pieces of the past: School seeks artifacts

The Catholic High Foundation is interested in cataloguing memorabilia from the school’s early days. During the reunion of alumni who attended the downtown campus, flyers were handed out seeking information on or specimens of the following:

Individuals with such items or information, or who are interested in being interviewed about their experiences at Catholic High are urged to contact Steve Aday, alumni director, or Anne Carter, alumni association development director, at (501) 664-3939.

They arrived by twos and threes, some briskly, some deliberately and others shuffling accordingly to a bad back, a newfangled hip or just towing Father Time in their wake. A coterie of about 50 of Catholic High School’s elder statesmen met July 1 for a unique reunion, that of alums who attended the school back when it was still located in downtown Little Rock.

Catholic High was located at 25th and State Streets in downtown Little Rock from 1930 to 1960.

The inaugural reunion was the brainchild of Steve Aday, Class of 2002, now a teacher and alumni director for the school. He said the idea was to bring the individuals together to preserve a piece of Catholic High’s past.

Aday noted plans were for the events to be held quarterly going forward.

“So basically the whole idea came from trying to preserve our history and our heritage so that future generations of future Rockets would know where they came from.”

Alumni enjoyed breakfast and conversation, swapping war stories with their comrades in the school’s new cafeteria, one of the completed portions of the ambitious floor-to-ceiling renovation funded by an ongoing capital campaign.

The resulting improvements are a far cry from the old downtown digs, according to alumni and former longtime teacher Michael Moran. In his book “Proudly We Speak Your Name,” Moran recalled his freshman arrival to the campus, three years before the current location at 6300 Father Tribou Street in midtown Little Rock was completed.

“The buildings at 25th and State were three: classrooms (and quarters for two priests, the principal and the assistant) in one, the gym in another, and the third was the library,” he wrote. “The buildings exhibited a tired-looking, red brick exterior and the marble stairs in the classroom building had little puddles of wear in them from countless feet of Little Rock College and St. John’s Seminary students who had preceded us …”

John Shields, Class of 1941, not only recalled the building, but the very start of the school in 1930. The Christ the King parishioner said virtually everything about his experience is dramatically different compared to today save for one thing — the camaraderie experienced among his classmates.

“There were 31 in my graduating class and I can probably tell you what happened to 30 of them,” he said. “Even though the war split us up, we’ve stayed in touch and I still have close friends from my class to this day.”

Shields, 90, wasn’t the most senior member in attendance; that honor went to fellow Christ the King parishioner Roy Paulet, Class of 1936.

“I think this is a really good idea,” he said of the reunion. “I’d like to see it catch on.”

Paulet brought along a couple of tokens to illustrate how much things had changed from his days at the school. One was an original photo of him in his football uniform and the other was a copy of his biography “From Candy Man to Mr. Collector” in which he captured what life was like for a high schooler in Depression-era Arkansas.

“My freshman year found me very naïve and bashful,” he wrote. “In 1933 times were pretty hard. There were no buses taking boys to and from school and no free lunch programs … I walked back and forth to school every day because that is the way it was for everybody. I was lucky to get a job in the school cafeteria waiting on the priests’ lunch table for which I got my lunch free.”

In his brief remarks, Aday said the school was interested in collecting and preserving similar artifacts and announced a soon-to-be-launched project by the Broadcast Journalism Club to catalog personal accounts of life at the school through a series of video interviews. Any alumni interested in sharing his story is asked to contact the school office.

Keith Caldarera, class of 1987 and a member of the Catholic High Foundation board, attended the event with his father, Louis, class of 1954. He said such nuggets from the school’s past only help further solidify the bond that spans the generations, renewed annually with the latest incoming class.

“It’s a learned process. I think as a freshman they may not quite grasp the full scope of what Catholic High is but in time and particularly at the end of their fourth year they really start to embrace it,” he said. “It is a brotherhood that is timeless. When people understand that you went to Catholic High they immediately become connected to you.”

Pieces of the past: School seeks artifacts

The Catholic High Foundation is interested in cataloguing memorabilia from the school’s early days. During the reunion of alumni who attended the downtown campus, flyers were handed out seeking information on or specimens of the following:

Individuals with such items or information, or who are interested in being interviewed about their experiences at Catholic High are urged to contact Steve Aday, alumni director, or Anne Carter, alumni association development director, at (501) 664-3939.