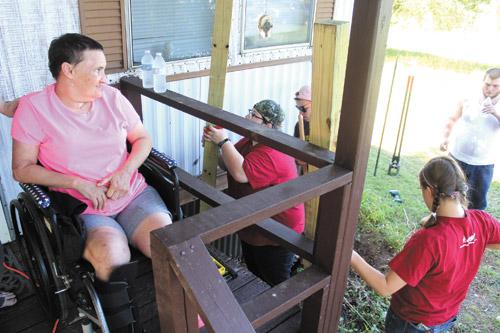 CONWAY— The broken glass tinkled daintily as wind chimes against the collective gasp of the work crew. A college co-ed maneuvering an 8-foot pressure-treated wood post just snagged her foot and, pitching forward, crashed the post against the front window of the double-wide trailer.

Then, from the woman in the wheelchair a hearty cackle spilled down from the redwood landing upon which she was parked onto the wide-eyed gaggle of college students standing frozen in their shoes.

“Uh-oh!” said Lori Watson, then more giggles which put the steam back into the volunteer workers there to build a wheelchair ramp. “Need a new window!”

Many homeowners wouldn’t have met the situation with such a reaction, but when you’ve been twice struck by a tornado — the most recent carrying you a quarter mile from your pulverized home then slam dunking you to earth so hard it breaks both legs, pelvis, ribs and face — it takes more than a broken pane of glass to get Watson’s dander up.

“I know the Lord is here and was there with us too, so that’s what keeps my hope up,” she said. “I lived, y’know, I’m so blessed. I got my family and people helping all around.”

One of those people is Tracy Eichenberger, disaster preparedness and response coordinator for Catholic Charities of Arkansas, and comments like these make the stress, long days and dry paperwork worthwhile for her and her two-person team of disaster case managers. Formed and staffed less than two months ago, the trio represent CCA in the continuing effort to lead storm victims like Watson into new homes, replace destroyed appliances and rejoin everyday life.

“We are the long-term case managers,” Eichenberger said. “Our goal is to follow through with that client until they reach their new normal.”

Bringing help and resources to the small Arkansas towns of Mayflower and Vilonia and western Pulaski County following the April 27 storms mimicked in miniature the chaos wrought by the F5 twisters themselves. As the deluge of agencies, churches, organizations and governmental entities descended on the communities, responsibility for the multitude of needs were assigned or assumed. For some this meant food drives or cleanup, for others, volunteers or school supplies. If you’re talking long-term recovery, you’re talking to CCA.

“The FEMA coordinator who’s been here working with us estimates rebuilding will continue for 18 months to two years from now,” Eichenberger said. “A lot of what we do on a day-to-day basis is actively following up on applications, finding new sources of assistance and calling people to assist them. Part of it too is just calling those we haven’t had any contact with in a couple of weeks and say where do things stand with you, what are your needs at this time.”

Needs, Eichenberger said, are moving targets. One day a person needs money to pay for a hotel room where they’ve been staying, the next they’ve moved into a trailer and need help getting household items, furniture or appliances.

CCA doesn’t buy items, but taps resources that do, such as the voucher system the St. Vincent de Paul Society worked out with local furniture stores. They don’t buy trailers, but troubleshoot applications to FEMA and other programs to help ensure victims’ applications move smoothly. The list goes on.

Much of what Eichenberger and her team do is unglamorous and tedious, but it’s also necessary legwork that matches homeowners to the resources necessary to make things happen. The trio, including case managers Cynthia Shuffield and Clara Avila, currently manages 160 cases from their cozy one-room office provided by St. Joseph Church in Conway although not all need the same level of handholding.

“One of our goals is helping those who are on fixed income either because they are elderly or on disability of some sort, those who are uninsured and also the undocumented immigrants who may not have access to other assistance,” Eichenberger said.

Funding for the staff and victim assistance came from a May 4 collection at all Masses. As of June 30, those funds totaled $332,599. Patrick Gallaher, executive director, said the office will stay open so long as a need persists. Volunteers from at least nine parishes within the Diocese of Little Rock provided labor to clean up house sites, rebuild homes and assist with survivor case intake. Other parishes sent in-kind items to be distributed to assist survivors.

The ones Eichenberger worries about are the ones that are still out there either unaware or unwilling to risk coming forward for help, particularly undocumented families. Many of the undocumented immigrants don’t have insurance and most likely would not qualify for federal dollars.

“In one area we have good penetration. In Black Oak Ranch, we’ve made a lot of headway. Once we were able to help one family, the information spreads and so we then have multiple people out of the same family,” she said. “In Mayflower, there’s a population there that we don’t feel like we’ve reached yet.”

The push, therefore, has lately been to make sure people still needing help are aware the team exists and is ready to help them get the assistance they need. Asked how large a pool of people this potentially represents, Eichenberger only shakes her head.