What are the secrets of Christ the King’s success? 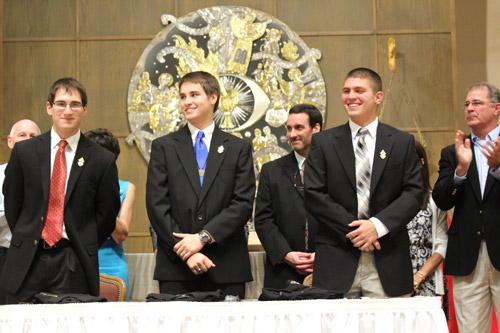 The U.S. Conference of Catholic Bishops has designated Nov. 2-9 as National Vocations Awareness Week. Catholics are encouraged to pray for future vocations to the priesthood, religious and consecrated life, as well as for those currently in formation or practicing their vocation.

According to Conrad Battreal, co-chairman of the parish Vocations Committee, Christ the King will observe the week from Nov. 1-8 to encompass evening Mass Nov. 1. All organizations must plan activities to support vocations that week.

This year, Battreal said, the emphasis will be on thanksgiving for how much the parish has already accomplished as well as re-emphasizing the need for additional priests and religious.

“Some years ago, we started painting an image that no priests means no Eucharist. That got people’s attention,” he said.

Taking the podium at Aug. 9’s Taste of Faith dinner in Little Rock, Msgr. Scott Friend, diocesan vocations director, couldn’t help himself. Introducing the diocese’s seminarians, he asked the crowd to refrain from applauding until all had been recognized. Then, in stern headmaster tone, he issued a mock warning.

“Now I know you people from Christ the King think you’re special. But just because you have 11 seminarians, which is more than some dioceses …” he said before Christ the King parishioners in attendance raucously ended his sentence with applause.

You can’t throw a stick in the Diocese of Little Rock without poking a seminarian native to Little Rock’s Christ the King Church these days. While other parishes can point to comparable numbers as a percent of congregation, none matches the west Little Rock parish’s headcount. In eight years, the Catholic congregation has produced one priest and lists 11 diocesan seminarians and one religious order seminarian.

“He baptized most of these young men, and I was blessed to give many of them first Communion and be their pastor for the past 13 years,” Msgr. Malone said. “I see my vocation as priest as extremely connected to Msgr. Hebert in the sense that both of us love Jesus Christ, both of us love being priests, and we love being pastor of Christ the King. I see that I’m standing on his shoulders.”

Brother Jacob Wisenbaker, a Christ the King parishioner and 2011 graduate of Catholic High School, is a member of the Society of Our Lady of the Most Holy Trinity and began his studies this month at Sacred Heart Major Seminary in Detroit.

Most everyone you talk to about Christ the King’s success in fostering vocations points first to devotion to the Blessed Sacrament. Msgr. Hebert built the adoration chapel; perpetual adoration began on Msgr. Malone’s watch.

“Having perpetual adoration (is when) we started to see young men respond,” Msgr. Malone said. “There’s nothing greater than the presence of our Lord in the Blessed Sacrament. This is a 24/7 deal; we have people there 24/7 praying and in particular praying for, among other intentions, an increase in vocations to the priesthood and religious life. So, it’s just not a coincidence, it can’t be a coincidence.”

Mary Battreal, who along with her husband Conrad chairs the parish’s hand-picked vocations committee, said it’s not an issue finding hosts.

“It’s not difficult at all anymore, I have people calling me,” she said. “In the beginning, some thought it was just for people with large families and then just for families with boys. Now, it’s young, old, couples, families, single people, everyone.”

Equally impactful is a second “chalice,” a poster with photos of every Christ the King seminarian that is passed from one Christ the King School class to another following Friday’s school Mass. The children also write letters or prepare goody packages for young men away at seminary and pray for them throughout the year.

“One of our seminarians, Joseph Friend, was at Mass,” Msgr. Malone said. “He wasn’t dressed in any particular outfit or collar or anything, he’s just sitting in the pew and he said at the end of Mass he got up and a little child said, ‘You’re Joseph! You’re Joseph Friend!  We pray for you!’”

Many parishioners and parents also credit the 2,000-family parish’s active youth ministry program and the influence of Catholic High School on these young men’s decision to discern their calling.

“I’m not embarrassed or shy about asking a young man,” the pastor said. “When they start serving Mass in seventh grade, I’ll say, ‘Wouldn’t it be great one day if you wore these vestments? Help me up the steps, celebrate Mass together?’ And, you can see the reaction on the faces of young men as they serve Mass with me around the church.”

Moreover, he added, “we have encouraged people not to be afraid to ask someone, ‘Do you think the Lord is calling you to the priesthood? You have all the things that it seems the Lord would want in a young man to pursue this calling.’ And so our people are no longer bashful about that.

“I’ve had young men come to me and say ‘Someone behind me at Mass tapped me on the shoulder and asked “Have you thought about becoming a priest?”’ So it’s on the front burner for us as a parish.”

The U.S. Conference of Catholic Bishops has designated Nov. 2-9 as National Vocations Awareness Week. Catholics are encouraged to pray for future vocations to the priesthood, religious and consecrated life, as well as for those currently in formation or practicing their vocation.

According to Conrad Battreal, co-chairman of the parish Vocations Committee, Christ the King will observe the week from Nov. 1-8 to encompass evening Mass Nov. 1. All organizations must plan activities to support vocations that week.

This year, Battreal said, the emphasis will be on thanksgiving for how much the parish has already accomplished as well as re-emphasizing the need for additional priests and religious.

“Some years ago, we started painting an image that no priests means no Eucharist. That got people’s attention,” he said.

Workers for the Harvest

Arkansas Catholic asked several current seminarians from Christ the King about the culture there that helped them discern their vocation and how other parishes can do the same.

“I remember when I was young, how very intentional (former pastor Msgr. Hebert) was about challenging young men to consider the call to priesthood, consider becoming a priest, consider becoming a religious and not being afraid to challenge us. When he retired, Msgr Malone really picked up that mantle and has helped to create an entire culture in which vocations are not only acknowledged, but celebrated.

“Any parish is capable of fostering vocations as well as Christ the King. The numbers might be different, because we’re a gigantic parish. But the most important thing is for the parish, under the leadership of its pastor, to change the culture.”

— Stephen Hart, whose brother Father Andrew Hart was ordained in 2012

“The parish has always been very supportive of vocations. They help all of us along, they pray for us all the time. And, we pray for them.

“This road, even though it is something we’ve taken on ourselves, it’s not something we walk alone. Our parishes walk with us and that’s why we want to come back and give thanks for what they give to us. (They) give time, they give days of prayer for vocations just for us. We might not know how God is using those prayers, but he’s definitely helping us through those prayers.”

“(I was) probably eighth grade, when I heard of Stephen Elser and Joseph de Orbegozo (entering seminary). I remember I just thought it was cool. It didn’t make me discern then, but it’s the first time it really popped into my head that someone close to my age could be a seminarian.

“When you see that, someone close to your age, you don’t see an old guy you see a brother. And if one of our brothers could be (a seminarian), why not us?”

“I think with any priest that’s an inspiration it’s the ability to be a father. And for me, that’s my experience with Msgr. Malone, just being a man of faith and not being afraid to stand up for the faith. Growing up, he’d be there handing us our report cards in the classroom and he’d make sure to give me a noogie on the head in the hallway. I think his example of being not only a great father, but a great friend in combining those, he makes a great priest. He’s just been a wonderful example for all of us from Christ the King to develop a relationship with the Lord to where maybe one day we can do the things that he’s done for us.”