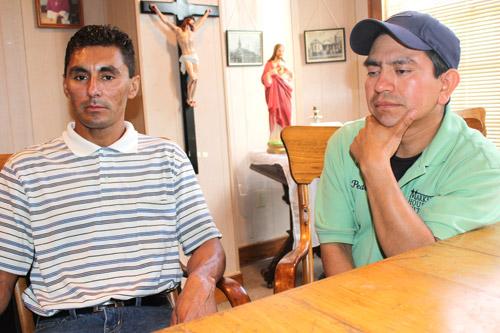 Dwain Hebda
Yovani Banegas (left) and Pedro Carillo work in the U.S., earning money to send to their families in Central America.

Dwain Hebda
Yovani Banegas (left) and Pedro Carillo work in the U.S., earning money to send to their families in Central America.

The U.S. southern border situation, where close to 70,000 unaccompanied minors have survived a dangerous trek to the states, is a crisis without category. Depending on who you talk to, the stream of humanity is a refugee emergency, a play for social handouts or an effort by drug cartels to augment its herd of human mules.

Talk to Pedro Carillo and the issue quickly boils down to its most basic elements.

“One night at dinner I told my wife and my mother that I was coming to the U.S.,” he said through an interpreter. “I told them, ‘If I don’t do this, we’re going to die.’”

Carillo, a member of St. Edward Church in Little Rock, isn’t one of the recent swarms of immigrants, but he might as well have been. A native of Guatemala, his life has followed a well-worn script of being born into such poverty as to curtail his education and all but nullify most of his life’s aspirations.

“When I was 8 I told my mother I wanted to become a priest,” he remembers. “She told me that it was not possible because we didn’t have money for school.”

Just over 56 percent of Carillo’s fellow Guatemalans similarly live below the poverty line; about 50 percent of the citizens work in agriculture. It is an economy of cruel twists: For instance, in the growing market for biofuel raw materials, up to 40 percent of domestically-grown corn is sold for export, creating higher prices for a staple of the Guatemalan diet.

In another cruel irony, despite ranking fourth among Central and South American nations in cocaine seizures last year, the government is reportedly considering ways to legalize poppy and marijuana production to boost export revenue.

Carillo is no stranger to the violence poverty and the drug trade can breed. Not long ago, his father was killed in his living room for refusing to hand over what little money he had to a group of armed intruders. Such acts only reinforce the difficult decision to leave.

“I told my wife I didn’t want to see my children have the same life. They couldn’t do anything else unless they went to school,” he said. “Coming here I was very scared and very sad leaving my family behind. But I have hope one day we will be together. I’m still not finished with my journey.”

When Yovani Banegas’ employer, a local fruit and vegetable company, got some news publicity recently the lean 28-year-old bachelor found his way on camera. His brush with celebrity was the latest in a line of lessons on life in America.

“Before I came here I heard stories that it was not that hard to get money,” he said. “That was the first thing I learned when I came over here was that you have to work.”

If that seems a fact of life Banegas should have already known, consider he walked onto a U.S.-bound airplane in his native Honduras at the age of 15. While he had a visa — no small feat in itself — that was about all the advantage he held coming to the states. While most American kids his age were trying to find their 10th-grade locker, he bore the fate of his mother and six siblings in an utterly foreign nation.

“Leaving my mother was very hard,” he said through an interpreter. “I was very scared, going to a country I don’t know anybody.”

Honduras holds the dubious twin distinctions of having Latin America’s highest poverty rate — 66 percent — and the world’s highest murder rate. Honduras suffers 90.4 homicides for every 100,000 people; in the city of San Pedro Sula alone the rate is a staggering 169 homicides per 100,000 people.

Banegas, also a St. Edward parishioner, was born in the countryside and his family moved to the city of Comayagua seeking better opportunities. Sitting less an hour from San Pedro Sula and home to one of the more notorious prisons in the area, the culture of violence was palpable. When his father abandoned the family and his mother developed health problems, Banegas felt the responsibility as the eldest to take the role of provider.

“I was always very worried that I will get sick and miss work here,” he said. “I have to work to support the family.”

Both men have other things in common. Neither one thought they would be in the United States this long, or at least not alone. Carillo, leaving three small children behind, thought a year or two at most and then the family would be reunited. That was nearly 13 years ago. In the time since, his labors at two jobs have given two of his children the chance to complete their education. Proud though he is, he still pines for his family.

“There’s two ways to see it,” he said. “It is very sad and very hard to be separated from my family. But I couldn’t do anything for them there so I did what I had to do. It’s very hard, they tell me what’s going on there and I tell them to take care of themselves. They want to move to the city, but I tell them if there is violence in our small village imagine how much worse it is in the big city.”

Bringing families here is an expense neither man can afford and the dangers are substantial. It took Carillo a month traveling alone to get here, with the help of some friends in the U.S. Banegas said the continued economic and crime problems in Honduras makes the prospect of returning essentially pointless: What opportunities are there in a nation where a young man on a church trip is killed for a piece of jewelry as Benegas’ cousin was over a religious medal he’d sent back home?

Still, it’s not tragedy or loneliness that defines these two immigrants, but an astonishing depth of faith and undergird of gratitude for blessings more fortunate people may fail to notice at all.

“God is so good; I am very grateful to be here,” Carillo said. “Even though I had no visa I was never judged. People had open hearts and gave me a job to help me support my family. What I did I did for love of my family and for those people who don’t see good in immigrants, I pray that God changes their hearts.”

“I always pray for this nation,” said Banegas, who aspires to be a missionary priest. “A lot of people have been so kind. I am happy to see people helping with immigrant issues. (Undocumented immigrants) understand that it is illegal to get here, but they do it because they need to. A lot of people don’t understand that.

“Jesus was an immigrant and he was rejected too. When someone rejects me, calls me a mojado (wetback), I pray for them.”