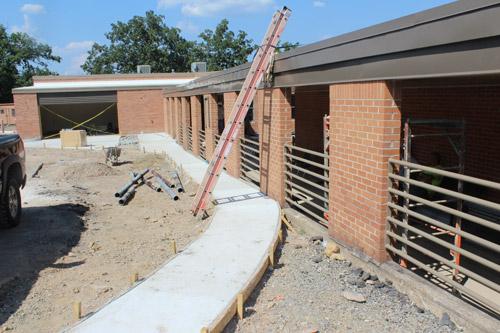 Dwain Hebda
A former school building on the Our Lady of Good Counsel Church campus is being readied for a new apartment for Bishop Anthony B. Taylor and a House of Formation expansion.

Dwain Hebda
A former school building on the Our Lady of Good Counsel Church campus is being readied for a new apartment for Bishop Anthony B. Taylor and a House of Formation expansion.

Bishop Anthony B. Taylor is downsizing.

After living in a 4,100-square-foot house in a residential neighborhood since he arrived in 2008, he will be relocating his residence this fall to the Our Lady of Good Counsel Parish grounds in Little Rock next to the diocese’s House of Formation.

The move will meet two purposes: The bishop will have smaller living quarters that fit his needs and he will get to build a stronger relationship with the men in formation living in Little Rock.

Bishop Taylor said when he arrived in Arkansas he wanted to move to a smaller residence, but it was not a good time to put a large house on the market because of the economy. In addition, he wanted to show respect for the late Bishop Andrew J. McDonald, who lived in the house from 1975 to 2002 and added a chapel that was dedicated to his family. Then-Bishop J. Peter Sartain lived there from 2002 to 2006.

“It is a lovely house, but it was already way too much for me,” Bishop Taylor said of when he arrived six years ago. “Bishop McDonald entertained a lot and it is really a house built for entertaining.”

Bishop Taylor said living near other priests and seminarians is more appropriate for his personality as well.

“I didn’t like living alone,” he said. “Being at the House of Formation Annex, I am present for Mass with the seminarians when I don’t have another Mass commitment that day, to pray with them, to be in a more community setting.”

Bishop Taylor said he hopes to get to know the seminarians better.

“I don’t intend to ordain anybody I don’t know,” he said. “I want to know them more than just knowing their name. I want to be supportive of them in their vocation.”

Bishop Taylor said some people might point to Pope Francis as his inspiration. The pope shunned the papal apartment for a small room in a guest house where he would be around more people. The bishop said he and the pope “are on the same page,” but added he has wanted to move well before the pope was elected in 2013.

Bishop Taylor said bishops living in large mansions “have to rethink a few things,” but he understands that in many dioceses the bishop’s residence has been owned by the diocese for 100 years and is used for entertaining. Because his residence is not an important diocesan or historical building, it is in the best interest of the diocese for him to move, he said.

In 2012 the former convent at Good Counsel Church was torn down and the Diocese of Little Rock built the House of Formation for nine seminarians and three priests who work in vocations. As more seminarians are studying in Little Rock instead of being sent to seminaries out of state, an expansion was needed.

The diocese worked with Good Counsel again to take over the former school building that was being used for religious education classes and turn it into the House of Formation Annex. The 6,565-square-foot brick building is being renovated into an apartment and office for vocations director Msgr. Scott Friend, two guest rooms with bathrooms, a student room, classroom and multipurpose room.

Only 25 percent, or 1,675 square feet, will be used by Bishop Taylor for his apartment, which will include a bedroom, bathroom, kitchen, living room and dining room, office and private chapel. If he has visitors, they will have access to guest rooms in the annex.

The annex is expected to be completed in October.

The renovation will cost about $800,000. Greg Wolfe, diocesan finance director, said the renovation plus the construction of a two-car garage will be paid for by sale of the bishop’s home, donations and Catholic Arkansas Sharing Appeal funds.

In exchange for Good Counsel giving up five classrooms, the diocese also is paying for a portion of the renovations being done in its former school building for replacement classrooms.

The bishop’s three-bedroom residence is located in the Sherrill Heights neighborhood overlooking the Arkansas River. It is on the market and can be viewed by calling Denise Carle of Carle Properties at (501) 256-4688 or by email, .