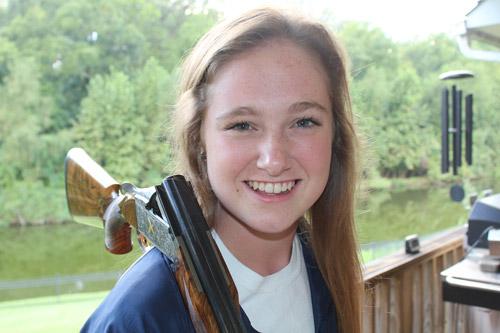 Dwain Hebda
Grace Hambuchen, 17, flashes a winning smile with her Krieghoff K-80 12-guage shotgun. The Mount St. Mary senior is one of the top junior trapshooters in the country.

Dwain Hebda
Grace Hambuchen, 17, flashes a winning smile with her Krieghoff K-80 12-guage shotgun. The Mount St. Mary senior is one of the top junior trapshooters in the country.

It’s said the people and things you love most are the hardest to capture in words. Maybe that explains why Grace Hambuchen, a senior at Little Rock’s Mount St. Mary Academy, has yet to name one of her favorite things.

“You know, I have named everything else of mine, but I just have not named my gun,” said the 17-year-old parishioner of Christ the King Church in Little Rock.

If you’re native to Arkansas, or a state where hunting and sporting arms are similarly common, you understand her quandary. If you’re a competitive prodigy as Hambuchen is in trap shooting, even more so.

Competitive shooters see their high-end sporting guns to have personality all their own and getting in tune with it is the difference between a weekender and a world teamer.

That aside, Hambuchen and her Krieghoff K-80 12-guage are having a memorable year. At July’s National Junior Olympic Shooting Championships in Colorado Springs, she placed second so narrowly, tournament officials had to go to a tiebreaker to determine the winner.

“I’m just happy I made the Junior Olympic team,” she said. “It was the best week of my life.”

Trap shooting is an Olympic sport where competitors try to hit a flying clay disk smaller than a salad plate. The sport falls into two camps:  Amateur Trapshooting Association and international trapshooting.

Olympic competition follows international rules whereby 15 fixed traps — three per shooting station — launch clays more than 80 yards in excess of 60 miles per hour at steep angles. The machines are programmed to launch targets at varying heights and in random order so the shooter can’t fall into predictable flight patterns.

The J.O. meet featured five rounds, 25 clays per round. Hambuchen’s perfect 25 of 25 in the fourth round was one of only four perfect scores in the women’s competition the entire meet.

ATA meets sling 4¼-inch clays between 48 and 52 yards at 42 miles an hour, about 10 feet off the ground. Its format forms the basis for many club and high school meets, such as the program sponsored by the Arkansas Game and Fish Commission.

It’s also the style of shooting that Little Rock Catholic High’s team, now in its second year, took all the way to state last year. Both Hambuchen siblings competed for the Rockets, now Grace is working to launch a Mount St. Mary team. The prospects look good as more than 60 girls expressed interest when the idea was first floated last year.

“It surprised me, honestly. I expected a bunch of girls saying, ‘You shoot with boys?  You’re doing a boys sport.’” she said. “But there’s actually a lot of girls who go out and hunt every weekend with their family. I’ve had a lot of other girls come to me and say, ‘Grace will you please take me hunting, I’ve never been, but I really want to go.’ ”

Hambuchen’s been firing away longer than even she can remember, first with BB guns, then pellet guns. Family lore puts her first discharge of an adult weapon at around age 7.

“The first time I actually shot a real gun was in my grandpa’s back field,” she said. “I picked up this tiny little .410 shotgun — they’re itty bitty, they’re like a pellet gun — picked it up, shot it, cried for hours because I thought a mule had kicked me.

“Years later I pick up another .410 and I shot it and I was like, ‘Did it work?’ I shoot a huge 12-gauge shotgun now so it’s nothing. My brother always makes fun of me, ‘You cried the first time you shot a gun.’”

The jibes she takes from her younger brother Anderson, a sophomore at Catholic High, are small stuff compared to some of what she’s heard. During a period her family lived in Boston, a period she coincidentally made the switch from pistol to shotgun, he discovered just how different the local culture was from her native Arkansas.

“There were people at my school that would walk up to me and be like, ‘My parents don’t like you because you shoot guns.’” she said. “So, shooting has made me more educated in worldviews. Hearing all these like, gun activists that are like, ‘We don’t believe you should carry a gun, especially children carrying guns,’ just really made me more open to everybody else’s political views about gun rights. And, it’s also given me very good arguments to take other places.”

No such worries when the family moved back home a couple of years ago. Arkansas is one of the leading producers of elite trap shooters in the nation. Four women and one man placed in the top 10 at the national JO contest and a November meet in Tillar (Drew County) will help select shooters for various 2015 international competitions.

“In this next competition and another one in the spring, the combined scores are going to go into what makes our world cup team for juniors,” she said. “So I just have to train really hard for that one. I would love to be able to compete overseas, and I would love to make the national team and someday make the Olympic team. That would be fantastic.”