After a 20-year break, Spanish Mass returns to Camden 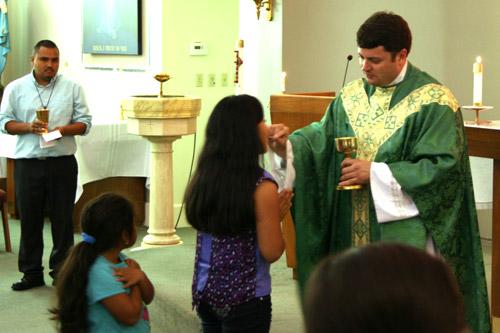 CAMDEN — Dark hair and eyes fill the front of St. Louis Church as Father Tony Robbins enters at the end of the procession.

The dark eyes follow him as he makes his way to genuflect before the altar. Choir voices, accompanied by guitarists and flautists, lift the tempo as the nave begins to fill with worship when the new Spanish Mass begins.

Father Robbins has been at the helm of St. Louis for the past three years. This year, though, the dots can be connected that led him to Camden and the new Spanish Mass in particular.

The dots travel all the way back to his eighth-grade Spanish class at Our Lady of the Holy Souls School in Little Rock. That was the first year Holy Souls changed its foreign language class from French to Spanish. It didn’t change his life at the time, but it was a hint at what was to come.

Years later, during his last year of college, he signed up for a Spanish class. That was also the year he said he began thinking seriously about what he was going to do with his life. That was 2004. The next dot came a few months after graduation when he entered the seminary.

During his seminary studies he learned the majority of Catholics in Arkansas are Spanish speakers. With that in mind, he began to build on what he had already learned.

“I knew it was imperative that I become proficient in the language to be able to meet the needs of the Spanish-speaking Catholics,” Father Robbins said.

In 2007 he went to Guadalajara, Mexico, for 10 weeks in order to study the language and build a solid foundation for where he felt God was leading him. In 2011, he joined Bishop Anthony B. Taylor on a pilgrimage to Antiqua, Guatemala, to visit the tomb of Father Stanley Rother. Father Robbins stayed an additional three weeks for more “practice” of the language that has become very important to his ministry.

Though Father Robbins made the decision to study the language, he said, “God was calling me. It was all of God’s doing. It was him making the way. He is making the way for the priests.”

In August, Father Robbins was relieved of his duties at St. Luke when Father Eddie D’Almeida was assigned to Holy Redeemer in El Dorado and St. Luke. While overseeing Camden and Magnolia, Father Robbins has been named an assistant vocations director for the Diocese of Little Rock.

After learning more about his Camden parish, he realized that although the younger Hispanic parishioners speak English, many of their parents and grandparents do not or would be more comfortable worshipping in their native language.

Father Robbins is not alone in his work with the new mission. Llaneth “Janet” Chavez is the new Spanish mission director. With her help, St. Louis held its first Spanish Mass in more than 20 years on Sunday, Aug. 24.

By Sunday, Sept. 21 — which also happened to be Father Robbins’ birthday — the Spanish Mass had grown to about 50 Spanish-speaking parishioners. The pastor said they average about 40 each Sunday and he’s encouraged by the increase in Sunday’s attendance.

Helping with the catechesis of the new mission is a group from Hot Springs called the Apostles of the Word. They have been going door to door inviting Catholics to come to the Mass in Camden.

Visitors can see in the eyes of those in attendance that they indeed are grateful for the opportunity to celebrate Mass in the Spanish tradition in which they were raised. They have a choir accompanied by flautists, guitarists and a piano player.

It was easy to see their love for Father Robbins as they serenaded him with “Las Mañanitas” for his birthday.