St. Joseph recognized as one of the top-performing schools in the United States 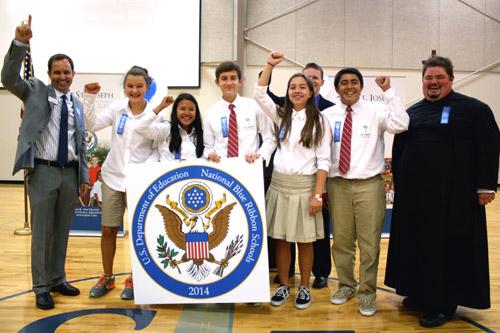 FAYETTEVILLE — Students at St. Joseph School in Fayetteville were given permission to dance.

And dance they did as the school received the prestigious National Blue Ribbon Exemplary High Performing School Award for 2014 joining an elite group of only 3 percent of the nation’s schools.

One of only three schools in the state of Arkansas to be recognized, state and local officials attended an assembly at St. Joseph’s DeBriyn Center Tuesday, Sept. 30 together with students, teachers, staff and parents to recognize the accomplishment.

“St. Joseph’s was chosen because our students scored in the top 15 percent nationally in reading and math on nationally normed tests for the last four out of five years,” said Jason Pohlmeier, who was named principal at St. Joseph’s this past spring, “so the students are the real stars.”

Pohlmeier served as principal for five years at St. Edward School in Little Rock before accepting the position at St. Joseph, but said he could feel “an excellence” in the atmosphere of the school when he made a visit there last January with the Arkansas Nonpublic School Accrediting Association as a team member.

Immaculate Conception School in Fort Smith received this distinction in 2013. Of the state’s approximately 1,200 schools, only 37 public schools have received the award.

“The education of our children is the single most important act we can do,” said Third District U.S. Congressman Steve Womack, who was there to celebrate the award along with State Rep. Charlie Collins. “This is important because we don’t educate children today to win awards but to prepare them for the future.”

“It is great that the world gets to see what I already knew,” said Collins, a former parent of four St. Joseph students, as he addressed the assembly and congratulated the students for their achievements and for following their motto, “I will try my best every day to learn, to love others and to act like Jesus.”

The National Blue Ribbon Award distinguishes public and nonpublic elementary, middle and high schools where students are performing at very high levels or where significant improvements are being made in students’ academic achievement.  The National Blue Ribbon is considered the highest honor a school can achieve in the United States.

The 30-page application for the award was a yearlong process, according to Wilburn, who has been at the school for seven years and is a parent of three current students.

High standardized test scores qualified the school to submit an application to the Council for American Private Education (CAPE) highlighting the school’s operations in areas such as assessments and use of assessment data, curricula, professional development, leadership and community and family involvement. After the review and approval of the application, said Wilburn, CAPE recommended St. Joseph to the U.S. Department of Education as one of only 50 nonpublic schools to be considered for the award.

“Every day that we pull in the parking lot and walk in to the school, I know that my daughters are getting one of the best educations in northwest Arkansas,” he said.

Currently, there are 320 students enrolled in the three-year-old pre-kindergarten-through-eighth-grade school with 45 of those students receiving tuition assistance and 50 students receiving free or reduced lunches. St. Joseph serves both Catholic and non-Catholic students and includes 105 minority students.

The school has been lauded for their focus on academic excellence, use of state-of-the-art technology, respect for life and community service activities with the Economic Opportunity Agency Children’s House, Loving Choices Pregnancy Center, Cooperative Emergency Outreach Food Pantry, Seven Hills Homeless Center and NWA vs. Hunger.

“This award is a confirmation of the excellence and strong academics and vibrant staff in this school, but also a reminder to keep the bar set high and a call for all of us as Catholic schools to lift each other to excellence,” Pohlmeier said.