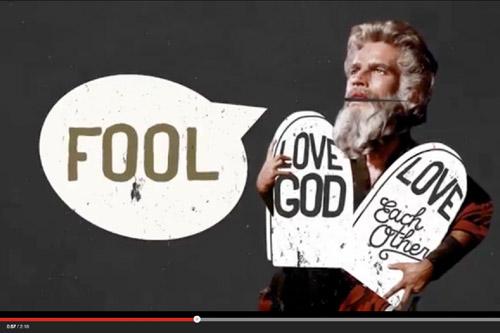 vcat.org screen capture
“Love God/Love Each Other” in the video catechism series at vcat.org aims at youth with modern graphics and words set to hip-hop music. The video was created by the Diocese of Wheeling-Charleston, W. Va.

vcat.org screen capture
“Love God/Love Each Other” in the video catechism series at vcat.org aims at youth with modern graphics and words set to hip-hop music. The video was created by the Diocese of Wheeling-Charleston, W. Va.

WHEELING, W.Va. — A new series of catechism videos is in the works aimed at youth and focusing on morality.

Bob Rice, a professor at Franciscan University in Steubenville, Ohio, is the writer for the series, known as VCat. The first video in the “Morality” series was released in October.

Titled “Love God/Love Each Other,” this video morphs hip-hop music and graphic arts to discuss the importance of love. It is a collaboration between Rice; Outside da Box Productions, who produces nearly every video in what is a four-year series; Likeable Art, a graphics art specialists company; and Righteous B, a Christian musician.

“One of the important things about the video catechism,” said Bob Perron, executive director of the Diocese of Wheeling-Charleston’s Department of Youth Ministry, “is that we are using several different genres both in video style and approach to make these relevant to young people. This particular video has an urban feel to it that will appeal to youth not only in West Virginia, but in the country.”

Rice agreed. “What we are doing with these 18 videos is show young people that the commandments of God actually set us free and don’t restrict us,” he told The Catholic Spirit, the diocesan newspaper.

This is the third year for the series. The first two years focused on the overall themes “Creed” and “Sacraments.” The overall theme for the fourth year will be “Prayer,” available beginning October 2015. The entire series is available online at www.vcat.org.

He said the “Morality” series will touch on the topics of freedom, right and wrong, forming a conscience as well each of the Ten Commandments. Its creators will use dramatic re-enactments, typography, comedy and other genres so that young people remain interested.

“We wanted ‘Love God/Love Each Other,’” Rice added, “to be the first video of the (third) series because the Catechism (of the Catholic Church) makes it very clear how inseparable the love of God and the love of neighbor is. We see that in the parable of the good Samaritan. When we love our neighbor, we also love God. The catechism makes it clear that all of the teaching on morality needs to be in light of those two great commandments — love of God and love of neighbor.”

Rice said he feels fortunate to be collaborating with the Diocese of Wheeling-Charleston and different production companies to produce meaningful videos for today’s Catholic youth.

“It’s an amazing experience,” he said. “I feel blessed to have the opportunity. Being a scripter is important, yet it is easy for me to write a script — I just get to think about stuff. Finding a group of people that put it together as well as it does, that is the real challenge and the real gift of working with people like Righteous B and Outside da Box.”

The West Virginia diocese, he said, “is doing something very unique. Nobody has ever tried to put together videos over four years that would hit the content of the catechism in a way that young people find relatable. It is an honor to be part of that project.”

You can get the true Catholic news delivered, emailed

Deidra Lee: Taking Care of the Little Ones