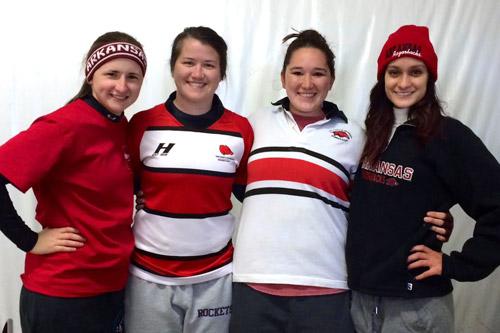 Geared up against the cold, Catholic teammates Grace Crifasi (left), Katharine McDonnell, Landis de Rossitte and Franchesca Parenteau pause for a group photo before national rugby tournament play. The U of A women’s rugby squad competed in the national tourney Nov. 15 and 16 during heavy snowfall that resulted in four inches of accumulation.

Geared up against the cold, Catholic teammates Grace Crifasi (left), Katharine McDonnell, Landis de Rossitte and Franchesca Parenteau pause for a group photo before national rugby tournament play. The U of A women’s rugby squad competed in the national tourney Nov. 15 and 16 during heavy snowfall that resulted in four inches of accumulation.

In just three years, a University of Arkansas squad has gone from nothing to gritty, undefeated conference champions; a team of runners, blockers and tacklers who this month took the field to play for a national championship.

It would be world news if it was Bret Bielema’s gang of blockers and runners, but it’s not. It’s women’s rugby, led by four Catholic pals bent on making you pay attention to the sport that’s become their passion.

“A big part of the appeal is the empowerment of women that it gives,” said Grace Crifasi, 20, who grew up in Our Lady of the Holy Souls Church and School in Little Rock. “Typically it’s seen as a gentleman’s sport and the fact that women can do just the same thing as the men is great.”

This is Crifasi’s team, and Katharine McDonnell’s. Wandering into an organizational fair three years ago, the 2012 Mount St. Mary Academy grads were looking for something new. It came down to rugby or lacrosse.

“I had never played, but I heard about it from my dad who played when he was in college,” said McDonnell, 20. “I think that was where the whole idea came from.”

Rugby is to America what ice hockey is to Jamaica. Sure, there may be a few in the crowd turned onto the sport, but good luck finding a team or even a fellow enthusiast. Former high school jocks Crifasi and McDonnell knew nothing about the sport which made the first practice an eye-opener.

“It took a really long time to understand,” said McDonnell, of Christ the King Church in Little Rock. “But honestly, I have four brothers and with playing sports in high school I thought I could handle it. I wasn’t particularly intimidated.”

In a nutshell, rugby involves two 15-member teams. Offense tries to get the ball across a goal line by running it up the field, with blockers. Passes can only be lateral or backwards. The defending team is trying to prevent all this by stopping the runner, at which time the ball carrier is obligated to release the ball. A formation called a “ruck” forms and both teams fight for possession.

Throw in tackling, which is just what it sounds like, and you have the basic idea, but as Landis de Rossitte, 21, attests, it’s still a far cry from understanding everything the game is about.

“Rugby is its own little world. It’s so different and so unique from any other sport,” de Rossitte said. “There is a family there. I can go to New Zealand and if someone knows I play rugby I’ll have a place to stay. Every rugby player out there, there’s this sense of bond that we all have.”

A product of St. Edward School and Church in Little Rock, de Rossitte is one of the muscle players, the kind of indispensable teammate that always has your back and delights in comparing war wounds afterwards.

“When I come home with bruises, I’m like, ‘Oh yeah, look at that one, that means I did something right,’” she said. “We’re proud of it, it means we worked hard and we gave it our all.”

About that: The rugby kit is basically a basketball uniform with sleeves. Tie your shoes and pop in a mouthpiece and you’re good to go. It’s something rookie Franchesca Parenteau, a member of Christ the King Church in Little Rock who graduated from MSM with Crifasi and McDonnell, proudly points out.

“I tell people that I’ve joined the rugby team and they’re like, ‘Wow do they let women do that?’” said Parenteau, 21. “It makes you feel good about yourself, being a girl and playing rough, you know? It’s fun.”

In this niche sport, the women who play are a close community and not just on one side of the ball. Athletes who spend 80 minutes beating the holy bejeezus out of each other laugh about it over a beer an hour later, following unwritten but strict cultural rules that mandate hospitality on the part of the home team, buying the visitors’ dinner or helping arrange lodging.

“We’ve had players who were really rough and kind of played dirty on the field but as soon as they get off and we socialize with them, they’re really fun girls,” Parenteau said.

The Arkansas team is having a banner year, culminating Nov. 15-16 with the national championship. Arkansas is a club team — which in the hierarchy of university sports is a step above intramurals — but they practice with a coach in preparation to take on (and knock off) schools fielding players on partial scholarship.

It’s a story even Hollywood couldn’t dream up, least of all a suitable ending, as the team lost two tough games and got bounced from the tourney. Still, they ended the year smiling. There wasn’t much fan support or media coverage, but when they took the field — frozen, as the tourney was in Iowa and no self-respecting rugby player would be caught dead playing indoors — this (U of) A-Team played for each other.

“It’s a great time to build on what we’ve started and it’s really tested my leadership skills,” Crifasi said. “The camaraderie within the sport of rugby has really taught me a lot about sportsmanship and respect for other people.”