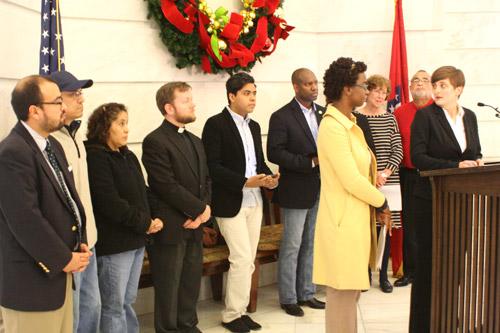 Catholic Charities Immigration Services in Little Rock and Springdale will begin next week making plans for how it will handle the expected increase in clients thanks to President Barack Obama’s executive action to give temporary relief to certain undocumented immigrants.

Patrick Gallaher, executive director of Catholic Charities of Arkansas, said the caseload for the two offices will “increase significantly” beginning in January.

“We are going to have to increase our staff to be able to provide for them compared to what we did for the DACA (Deferred Action for Childhood Arrivals) crowd (in 2012),” he said.

Gallaher estimated that of 60,000 undocumented immigrants living in Arkansas, about 30,000 will be eligible for the new program. He said he expects to see about 6,000 clients seeking help from Catholic Charities. Catholic Immigration Services is one of the only options available to low-income Arkansans. It is respected in the Hispanic community and is accredited by the Board of Immigration Appeals. Another low-cost option will likely be workshops sponsored by immigrant groups.

Gallaher said Catholic Immigration Services and immigration attorneys will be ready to help immigrants apply for the temporary programs, but there will be others who are not trained and accredited.

“There is a danger people will be taken advantage of by scrupulous practitioners often known as notarios,” he said.

One potential client is Carmen, a member of St. Edward Church in Little Rock. She and her husband intend to apply for the program. Two of their children, ages 6 and 11, were born in the U.S. and their 18-year-old son is a DACA recipient, often called a “dreamer.”

“I want to drive more places. I want to take my driver’s license,” she said. “I am very happy because it will help me get a job. I don’t want to be scared to drive.”

Alma, a single mother of two boys also at St. Edward Church, has lived in the United States for 22 years and is eligible to apply for the program. She said traveling long distances worries undocumented immigrants because they fear getting pulled over and deported.

“We are always afraid of that,” she said. “It is very difficult.”

“I want to apply for a better job,” she said. “And I can go visit my sister in El Paso, Texas.”

Father Jason Tyler, pastor of St. Edward Church in Little Rock who ministers to a large Hispanic population, told the media during a news conference Nov. 21 at the State Capitol that the president’s action was a “small, positive but only temporary step.”

“Among those immigrant parishioners, I have known many hard-working people, dedicated to their families, their faith and even to their adopted country,” he said. “I have watched with great sadness as many of them have had to live in the shadows, fearing deportation. I have watched families struggle when separated because of immigration laws that are broken, outdated and arbitrary.”

The conference, hosted by the Arkansas United Community Coalition, also featured support for the president’s decision from an immigration attorney, state representative, Just Communities of Arkansas and potential beneficiaries of deferred deportation.

In a statement, Bishop Anthony B. Taylor said, “Ultimately Congress and the administration need to work together to enact comprehensive immigration reform…. While we are optimistic the president’s executive actions may help as many as 60,000 Arkansans, they are not the long-term solution to a broken system of immigration laws and regulations. We long for the day when people who have migrated to our country will be received by an immigration policy that is just and fair.  As Pope Francis has said, ‘Every human being is a child of God. He or she bears the image of Christ. We ourselves need to see, and then to enable others to see, that migrants and refugees do not only represent a problem to be solved, but are brothers and sisters to be welcomed, respected and loved.’”

27 golf teams tee off to raise money for Catholic Charities