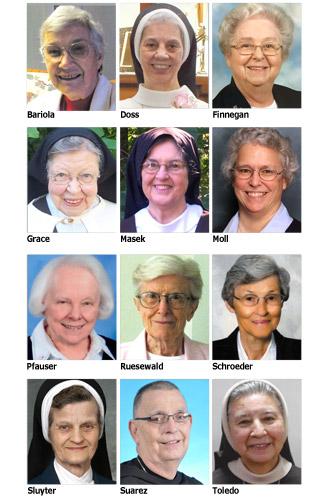 The 27th national collection for the Retirement Fund for Religious will be held Dec. 6-7 in the Diocese of Little Rock.

The annual, parish-based appeal is coordinated by the National Religious Retirement Office in Washington and benefits more than 35,000 senior Catholic sisters, brothers and religious order priests.

Last year, the Diocese of Little Rock contributed $147,174.24 to this collection. In 2014, the Benedictines at St. Scholastica Monastery in Fort Smith and Subiaco Abbey, Discalced Carmelite nuns and the Olivetan Benedictine sisters received financial support made possible by the Retirement Fund for Religious. Women and men religious who serve or have served in the diocese but whose communities are based elsewhere may also benefit from the annual collection.

•  Sister Mary Alice Grace, OCD, was born in Pittsburgh to Eleanor and Eugene Grace. Later, she and her sister, Mildred, were educated at St. Scholastica School in Aspinwall. At 13, she entered the Franciscan Preparatory School at Mount Alvernia and made first profession as a Franciscan in 1939. For about 10 years she taught school in Pennsylvania before transferring to the newly founded Carmel in Little Rock in 1950.

As a member of the Carmelite Monastery, Sister Mary Alice has served as director of formation and community correspondence. From 1992 to 2002 she and two other nuns lived at the New Orleans Carmel to care for five older sisters.

“I have always been happy and long for others to find this happiness here also,” she said.

•  Sister Mary Lucille Sluyter, RSM, entered the Sisters of Mercy Sept. 8, 1944, and made her final vows in 1947. She taught at schools in North Little Rock, Fort Smith, Hot Springs and Slovak. Sister Lucille spent most of her teaching years at St. Patrick School in North Little Rock as a teacher and principal.

“I tried to retire in 1992 from being a principal,” however she was asked to stay on as a volunteer religion teacher and interim principal when needed.

She moved to McAuley Convent in Barling in 2002.

•  Sister Madeline Bariola, OSB, proudly boasted at the age of 14 years old that she was going to enter the convent in high school.

“I do remember her telling us all, ‘Pray that God will help you make decisions about your future.’ And I did that, so all I can say is that God was tending to me,” she said.

Sister Madeline spent 28 years working at St. Joseph Orphanage in North Little Rock, a time she called the “most rewarding and fulfilling.”

“I was young and energetic back then, and that has been my way of life ever since,” she said. “Be happy, be alive and know that God is always there, still tending.”

“The daily schedule of prayer, work, leisure and being with my sisters always nourishes me,” she said.

•  Sister Mary Chabanel Finnegan, RSM, was born in Rose Hill, Miss., in 1937 into a large Irish Catholic family, the oldest daughter of six children. She later moved with her family to Hattiesburg, Miss, where she lived most of her early years. She graduated from St. Angela Academy in Aiken, S.C. in 1954 and later that year entered the Sisters of Mercy in St. Louis. Except for a six-year period as director of formation/novices for her religious community, her ministry has been in health care. She served in nursing, nursing education, administration, pastoral services, mission, ethics and board ministry in Missouri, Oklahoma, Texas, Louisiana, Mississippi, Kansas and Arkansas. Presently she serves in ethics and formation for leaders at Mercy Hospital Fort Smith, as well as sponsor/board member of the Mercy Health System in St. Louis.

•  Sister Rosalie Ruesewald, OSB, entered St. Scholastica Monastery in Fort Smith in 1951. She said she was initially resistant to the idea of being a Benedictine.

“For the past 25 years I’ve been involved in social justice ministry, which includes working for peace, immigration reform and an end to the death penalty,” she said. “I am grateful to have lived to see the changes Vatican II brought to the Church. It is heartening for me to see Pope Francis focus on the poor and marginalized, as Jesus did. My dreams include seeing the Catholic Church to one day be known as a peace church that takes the commandment, ‘Thou Shalt Not Kill,’ seriously, and I long to see the time when women worldwide are recognized and affirmed with real equality.”

•  Sister Stephanie Schroeder, OSB, was the fifth of 11 children who grew up on a small dairy farm in Windthorst, Texas. She was taught by Incarnate Word sisters in elementary and high school.

“Although the thought of a religious vocation would enter my mind, I would usually push it aside,” she said. “Mom and Dad would take several of us to St. Scholastica Monastery when my sisters, Sisters Barbara and Marietta, became novices or professed their vows. I loved the sisters and the monastery. I was attracted to the simplicity of their prayer and their hospitality. It was so much like our family and prayer life. This is what stirred and helped me to recognize my vocation and know this was where God was calling me.”

Sister Stephanie spent 20 years as a teacher in first to eighth grades, a high school religious education teacher, retreat leader and religious education and RCIA coordinator. She worked with the diocesan vocation director to start Fifth Grade Vocation Days and other programs and served on the National Liturgy Worship Forum steering committee.

She is currently the director of liturgy at St. Scholastica Monastery and gives directed retreats as a certified spiritual director.

•  Sister Mary Petra Masek, OCD, was born in San Diego and reared in Orange County, both in the city and on a farm.

“My vocation started in early life with the reading of the three children at Fatima and Our Lady’s words to them that many souls would be lost because there was no one to pray for them,” she said. “At 6 years old, I said that I will pray for them! But it was the reading of St. Therese’s “Story of a Soul” in my teens that clarified what I was being called to.”

After graduation, she entered a Carmel in southern California in 1962.

“In 1998, I transferred to Little Rock Carmel, delighted to discover that St. Therese was the patroness of our province,” she said. “I came to Arkansas a stranger, but now I am a proud Arkansan. I love the diocese and the people. I am blessed.”

•  Sister Dorothea Moll, DC, was baptized Susan Frances in St. Louis and entered the Daughters of Charity in St. Louis in 1964. Sister Dorothea earned her bachelor’s degree in business administration in 1965 from the University of Missouri St. Louis and earned her master’s degree in social work from St. Louis University in 1995. From 1970 to 1990, she served in hospitals and social agencies in St. Louis, Kansas City, and Austin, El Paso, San Antonio and Waco, Texas, in accounting and business. After receiving her master’s degree, she ministered to children, the homeless and those who have mental illness. Today, she is a social worker at the Daughters of Charity Services of Arkansas. She lives in Gould, where she enjoys gardening and candle making.

•  Sister Joan Marie Pfauser, RSM, is the second child of John and Gertrude Pfauser of Little Rock. She attended St. Edward School and Mount St. Mary Academy, both in Little Rock. She entered the Sisters of Mercy in 1964 and received a bachelor’s degree in social studies from Maryville University in St. Louis in 1969. She earned a master’s degree in school counseling from Loyola University in New Orleans in 1977. She has served at Mercy schools in St. Louis, New Orleans and Oklahoma City. For the past 30 years she has been the school counselor at Mount St. Mary Academy.

•  A member of the Missionary Carmelites of St. Teresa, Sister Cecilia Toledo, CMST, has served at various parishes in Arkansas, including Our Lady of Good Hope in Hope, St. Barbara in De Queen and St. Raphael Church in Springdale from 1997 to 2013. She is a founding member of the order’s presence at Holy Spirit Church in Hamburg starting in 2013.

•  Sister Marilyn Doss, OSB, was born in Whitefield, Okla., to Floyd James and Marjorie C. Plep Hollis. She spent most of her childhood years in Little Rock and entered Holy Angels Convent in 1987.

She said that some of her greatest memories of working in pastoral care were times when she was able to help Catholics who desired to return to communion with the Church. In addition to her work in pastoral care, she is currently teaching religious education classes to third graders at St. Anthony Parish in Weiner.

In her free time, she writes poems, plays games at recreation and watches movies on Sundays.

•  Brother Andrew Suarez, OSB, born Dec. 9, 1947, in St. Louis, attended Assumption High School in East St. Louis from 1962-1965. He professed vows as a Benedictine monk at Corpus Christi Abbey in 1989 and came to Subiaco June 4, 2002. His work at Subiaco includes housekeeping and help in the abbey wellness center.

The 27th national collection for the Retirement Fund for Religious will be held Dec. 6-7 in the Diocese of Little Rock.

The annual, parish-based appeal is coordinated by the National Religious Retirement Office in Washington and benefits more than 35,000 senior Catholic sisters, brothers and religious order priests.

Last year, the Diocese of Little Rock contributed $147,174.24 to this collection. In 2014, the Benedictines at St. Scholastica Monastery in Fort Smith and Subiaco Abbey, Discalced Carmelite nuns and the Olivetan Benedictine sisters received financial support made possible by the Retirement Fund for Religious. Women and men religious who serve or have served in the diocese but whose communities are based elsewhere may also benefit from the annual collection.