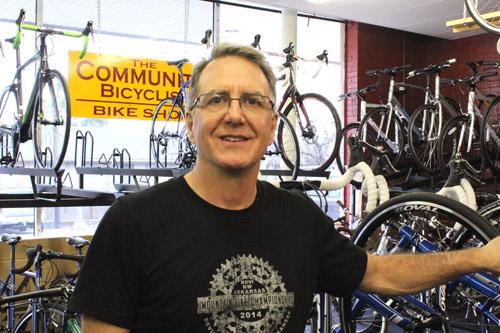 Dwain Hebda
Sam Williamson shows off some of the new models in the showroom. Founder of The Community Bicyclist, Williamson is also a member of Our Lady of the Holy Souls Church in Little Rock.

Dwain Hebda
Sam Williamson shows off some of the new models in the showroom. Founder of The Community Bicyclist, Williamson is also a member of Our Lady of the Holy Souls Church in Little Rock.

Everything you need to know about Sam Williamson and his love affair with the bicycle is found in a poster of a pre-teenage Williamson sticking the landing on a motocross-style bicycle after ramping off a picnic tabletop.

All of it — his shaggy, 1973 hair slightly aloft, the bike’s front fork and knobby tire jutting forward into thin air — is the literal picture of happiness and youthful abandon. And within the first minute of talking to the now 52-year-old, you discover the adoptive father of three and Our Lady of the Holy Souls parishioner hasn’t lost an ounce of passion for bikes and the people who ride them.

“I was just a real bike enthusiast, a real bike nut,” he said. “We’re all here because we love bikes and we’re going to ride regardless. That’s why we’re here and we wouldn’t be here if we didn’t.”

There are bigger, shinier shops in Little Rock than Williamson’s The Community Bicyclist, but none speak more to this enduring wonder of a boy and his bike. Everywhere you look, you see a little something of Williamson and each model and memento tells a story.

“We’re all here because we love bikes and we’re going to ride regardless. That’s why we’re here and we wouldn’t be here if we didn’t.” Sam Williamson

“When you work in a bike shop you see lots of cool new bikes,” he said. “I love the paint job on this one over here. I’m trying to figure out an excuse to build one of these up for myself just because I want that paint job. Oh, I could talk your ear off.”

Williamson got into this line of work seven years ago. Spiking gas prices helped spawn his clientele and today, Williamson and a couple of part-time gearheads (including his eldest son, Dimitri, who pitches in on breaks from college) hawk shiny new rides lining the showroom or breathe life back into road-worn models.

“I actually incorporated the name ‘Community Bicyclist’ two or three years before the shop opened,” Williamson said. “I wasn’t sure exactly if I wanted to do a local shop or maybe something more online oriented. Seven years ago, it all seemed to point towards opening a bike shop.”

Williamson’s expertise, like his trim frame, is honed by riding nearly every day, without ever veering into snob territory. Yes, there are $2,000 road racers to be had here, dainty and wound as the greyhounds of the bicycle world they are. But there are more entry and mid-level bikes to better appeal to a range of riders. For Williamson, that’s what “community cycling” means.

“I was really very passionate about commuting on bikes, using the bike for transportation and that still is the passion,” he said. “I pride myself on doing a wide variety of things (through the store) but that’s at the core of it. The name was a reflection of that.”

Shops like this are by no means extinct, but much of the charm of The Community Bicyclist is that you don’t see one everywhere you look. And that personality, combined with the public’s taste for buying local and the city’s development of several major bike trails, has helped him keep a steady clientele who appreciates personal attention and casual chatter nuanced by the smell of bike tires hanging overhead.

Bicycles are different than other sporting equipment. More than a favorite baseball or well-worn running shoes, a bike is a daily companion, a comrade in arms, a sidekick to your adventures. One species The Community Bicyclist is particularly known for is the touring bike, solid as a tank and packs like a mule for long, cross-country rides. Williamson loves these two-wheeled hobos. The new ones give off a restless quality, straining against the confines of civilization. The veteran models in for a tune-up are gloriously scarred and scraped in tune with their travels.

“About the same time the shop opened there was this group of folks who got into unsupported touring and needed bikes to do that. Just about every one of them bought a bike from me,” he said. “I still see pictures from that group. They started something called the BRAA rides, Bike Ride Across Arkansas. I still see those bikes from those trips.”

Given six days of Williamson’s week include the short pedal from his midtown neighborhood to the shop, he’s had the chance to road test every model he carries, a cycling agnosticism that feeds his knowledge of this model versus that. When cornered, though, he admits a personal favorite.

“I think there’s one part of me that doesn’t want to be talking to somebody who’s gonna go race a mountain bike, do a tour or whatever and I haven’t done it. There’s probably a part of me that’s motivated to do all of that just so I’ve done it all,” he said.

“For just what type of riding is the most fun, the thing that turns me on the most would be mountain biking. There’s just nothing that makes you want to whoop and holler more.”

Have you or someone in your family done something special in sports? Share it with us through News & Views from You.

See more news about Catholic students and parishioners in sports on the monthly "Good Sports" page, only in Arkansas Catholic's print or digital editions. Click here for subscription info.