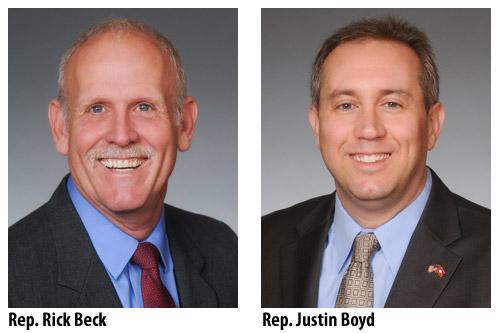 Two new Catholic faces are representing the state this year. They are Reps. Rick Beck of Center Ridge and Justin Boyd of Fort Smith.

With six representatives out of 100 identifying themselves as Catholic this General Assembly, the House’s Catholic representation is higher than the state average of 4.8 percent. Catholics, however, are underrepresented in the Senate. Only one senator out of 35, or 2.9 percent, identifies as Catholic.

“I don’t know how you can separate the two. Your faith is obviously the basis of it all. They’re one in the same and it’s very important to me,” Beck said of balancing his faith and work.

In his professional life, Beck has worn many hats, including working as an electrical engineer at Kimberly-Clark Maumelle facility for 27 years and was also an adjunct professor at University of Arkansas Community College at Morrilton.

“I believe truly in the family structure. What’s very near and dear to my heart is workforce development. That allows someone coming out of high school to (train) and have a trade to support a family.”

However, Beck said he understands not everyone has a “great family” life. Therefore, more proven programs that help at-risk youth are needed.

“I’m a conservative. I’m willing to pay for programs that work, but I want proof and you’ve got my backing. You can’t just tell me it works,” he said.

He is a pharmacist and co-owner at Coleman Pharmacy in Alma. A cradle Catholic, Boyd has volunteered as the school board president at St. Boniface School and is currently the chairman of the church’s endowment fund committee.

As a first-term representative, Boyd said he has several goals, including making sure people have access to meaningful work and quality education.

“As I interact with my patients in my pharmacy every day, they want good jobs they can be proud of. They want things to do, whether they’re outside or a church to attend,” Boyd said.

Boyd has proposed a resolution to help educate about prescription drug abuse.

Catholic lawmakers who were reelected include: