40 Days for Life not returning to Little Rock this week

Volunteers across from abortion clinic want 365 Days for Life, not just for Lent 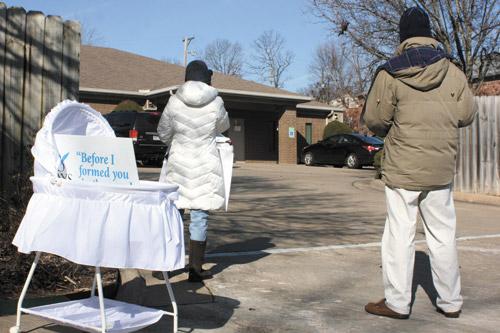 Aprille Hanson
Pro-life advocates Mary Pate and Ken Hiegel, both members at Our Lady of the Holy Souls Church in Little Rock, pray outside the abortion clinic at #4 Office Park Drive in Little Rock.

Aprille Hanson
Pro-life advocates Mary Pate and Ken Hiegel, both members at Our Lady of the Holy Souls Church in Little Rock, pray outside the abortion clinic at #4 Office Park Drive in Little Rock.

Click here to see a video of 40 Days for Life prayer warrior Carole Canino and her story of a woman who decided against an abortion thanks to the prayer warriors.

While the nation will once again kick off its 40 Days for Life prayer campaign this Lent to end abortion, Little Rock will not be participating. Instead, the goal is to focus more on the 365-day prayer campaign to save the lives of the unborn.

Marsha Boss, a member of Christ the King Church in Little Rock, has been helping host various biannual campaigns since the 40 Days for Life in Little Rock started in 2008. There have been 12 campaigns, with only one or two canceled before this year. Boss and other women like Mary Pate, a member at Our Lady of the Holy Souls in Little Rock, primarily take the reins to host the campaigns, which involves getting area church members, both Catholic and Protestant, to sign up for an hour of silent prayer in front of the Little Rock Family Planning Service, at #4 Office Park Drive in Little Rock, to be a support for women seeking an abortion. Trained members of the team are also available to talk to those in crisis and refer them to the Arkansas Pregnancy Resource Center, which is across the street from the abortion clinic, if they’d like more information on alternatives.

“That’s the gates of hell … really, those babies are being crucified there,” Boss said of the clinic. “We’re there to give them choices. There is hope. We try to be the hope for these girls. We’re not there to convert them or to judge them; we’re just there to help them know Christ who loves them.”

But this year, Boss said she and the others have received divine guidance to not run the spring campaign, which coincides with Lent.

“God told each of us separately that he did not want us to run it. We were not called to run it. God said, ‘I want you to build up ongoing prayer, get more non-Catholics out there, to adopt an hour or two,” to pray outside the clinic year round. That year-round effort started in 2009, Pate said, but getting more volunteers is the goal.

Boss said they have just recently recruited three more “prayer warriors” to choose a prayer hour between 7 a.m. and 4 p.m. Wednesday, Thursday, Friday and Saturday — the days when abortions are performed.

“I think people in Little Rock clearly don’t understand the volume of girls coming in there. It can be 15 to 20 girls in a six-hour period,” Pate said.

The leaders will hand out more flyers at area churches and to respect life committees and reach out to more Christian churches to get involved.

“Our goal is to get 12 people every hour on the days they’re doing abortions,” Boss said, but added other days of the week are also open for prayer. Typically, there are at least two people out there so no one has to be alone.

As of now, the leaders still plan on having a 40 Days for Life fall campaign. Boss said she hopes more young people in church youth groups take the torch.

“We want the youth groups out there; that’s the future of the Church,” Boss said. “That’s the age a lot of them are getting abortions. It would be really great if they could run the whole movement.”

Pate said there are countless lives she’s seen changed while praying at the clinic, including an Hispanic couple from Memphis who were told that the life of the child and mother were in danger and the doctor recommended an abortion. But upon stopping to talk with those praying, the mother decided to get a second medical opinion and began receiving pre-natal care in Little Rock.

“She did have some problems, but they survived, that was two years ago. We see so many girls come and say, ‘Well, my baby’s not going to live anyway’ and we see so many times that’s not true. I think doctors are afraid of litigation or whatever the reason,” Pate said. “You’d be surprised how many girls are coming from out of state.”

Then there’s the story of a young Chinese woman, pregnant with twins, her life being threatened by the man who got her pregnant. Her visa was going to expire and she was terrified. After walking into the clinic in tears, she saw the prayerful gathered outside. She soon came back out, giving the thumbs up, Pate said.

“She said she had looked in the Bible that morning and prayed God would send her a sign … that this is not right. She has twin boys now,” Pate said. “Those things happen more frequently than people realize. You really can try to do something to save a life. Come and pray.”

It’s moments like these, Pate said, that make the prayerful vigils worth it.

For those interested in participating, contact Boss at (501) 960-5051, e-mail or by joining and messaging the Facebook groups, “Ongoing Prayer Warriors Little Rock” and “40 Days for Life - Little Rock.”

“If we get more people out there we feel like it will just show the girls coming in that people care about them,” Pate said. “There are babies saved. Sometimes it seems futile, you stand out for days and nothing happens, but we have no idea what is happening behind the scenes. Maybe a girl drove off and decided not to have an abortion.”

The 40 Days for Life campaign in front of the Planned Parenthood clinic in Fayetteville will begin Feb. 18.

Click here to see a video of 40 Days for Life prayer warrior Carole Canino and her story of a woman who decided against an abortion thanks to the prayer warriors.