Running pastor looks to finish what he started 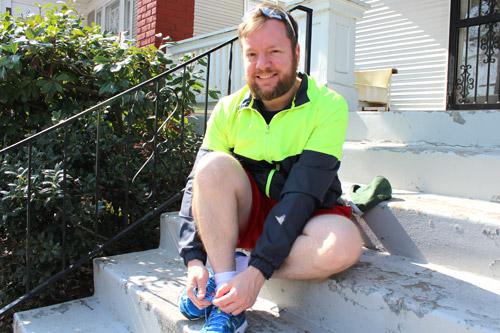 Dwain Hebda
Father Jason Tyler, pastor of St. Edward Church in Little Rock, laces up on the steps of the rectory before a training run. Father Tyler trained for six months to prepare for the March 1 Little Rock Marathon.

Dwain Hebda
Father Jason Tyler, pastor of St. Edward Church in Little Rock, laces up on the steps of the rectory before a training run. Father Tyler trained for six months to prepare for the March 1 Little Rock Marathon.

In keeping with its 2014 superhero theme, the Little Rock Marathon asked entrants to name their particular superpower on the sign-up form. One response stood out.

“I wrote ‘transubstantiation,’” said Father Jason Tyler through a hearty chuckle. “I wonder what the person processing the form thought.”

Even given the Little Rock Marathon’s fun-loving reputation, that had to be a first. But 2014 was a season of firsts for the 35-year-old runner starting with entering the hometown race to begin with.

“I’ve been running, off and on, since 2006,” Father Tyler said. “But prior to the fall of 2013, I’d never run more than six miles at a time, most were two- and three-mile runs. I was never a serious runner until I decided I really wanted to do a marathon.”

“How many people can say they’ve got a marathon running right by their church? I thought, you know, if I don’t run this thing while I’m here, I’m really going to regret that someday.” Father Jason Tyler

Father Tyler stops short of blaming Mass for the adventure, but it did play a role. St. Edward Church sits directly alongside the course and with its early Sunday morning start, the marathon passes right by the church doors around 9 a.m. Mass.

“For four years I’d stood and watched the marathon go by,” he said. “How many people can say they’ve got a marathon running right by their church? I thought, you know, if I don’t run this thing while I’m here, I’m really going to regret that someday.”

The padre didn’t have much of an athletic background to call upon, having last participated in organized sports at Sacred Heart Junior High in his native Morrilton. Fortunately, the Diocese of Little Rock boasts a surprising number of long distance runners: Fathers Mauricio Carrasco, John Antony, Greg Luyet and then-seminarian Father Rick Hobbs, to name a few. Several St. Edward parishioners and schoolteachers were also race veterans.

“I talked to Father Mauricio a little bit, although there’s no way I’m going to get anywhere near his times. Father John Antony as well,” Father Tyler said. “A parishioner and good friend of mine (Catholic High teacher) Ed Dodge and I would text back and forth our running times or distances or whatever. At our school, we have three teachers who’ve run marathons. I’ll often have lunch with our teachers during the school day and we’ve had a number of running conversations.”

Marathon preparation is a long-term investment; at 26.2 miles, even training runs can take several hours. The life of a parish priest being what it is complicated things but also made training runs incredibly therapeutic.

“One of the things I really enjoy is for the time I am out there, I can be somewhat distracted from all of the other worries of parish life,” he said. “I can focus on the running, I can think about what I am doing there and not be consumed with other things. It’s a situation where you can escape from the world for a few hours.”

Race day, March 1, 2014, proved bitter cold and wet with rough weather forecasted. Undeterred, Father Tyler toed the line and settled quickly into his 10-minute per mile pace. He was about an hour in when turning a corner the graceful spires of St. Edward Church came into view.

“It was great to go past the church. One of the teachers had her students make a big banner that said, ‘Go Father Tyler’ and it was right there on the front door of the gym. One of our Hispanic dance groups was outside dancing right along the street,” he said. “(Later) we’re going along and someone asked me, ‘What do you do?’ ‘Oh you know that church we passed about half a mile back? I’m the pastor there.’”

The story should end with
Father Tyler sprinting across the finish line, but God had other plans. Three quarters of the way home, a storm overtook Little Rock and race officials cleared the course for safety reasons.

“I made it 18.4 miles. It took me three hours and nine minutes,” he said in a proud yet wistful tone. “We’re hoping for much better weather this year, obviously.”

Father Tyler is days away from his second go at the race March 1. As far as he knows, he’s the only hometown clergy running this year and he’s committed to carrying that banner all the way to the finish.

“I often think about how for any of us, it’s not a short sprint but a long course of our entire life to grow closer with God,” he said. “It takes a lot of patience and endurance and frankly, for any of us to grow in prayer, we have to be ready to pray on days we’re just not feeling up to it.

“To run, you have to be ready to run even on the days when you don’t really feel like it. And when you’re out there for 16 or 18 miles and you want to give up, that’s when you just have to persevere because you know the reward at the end is worth it.”