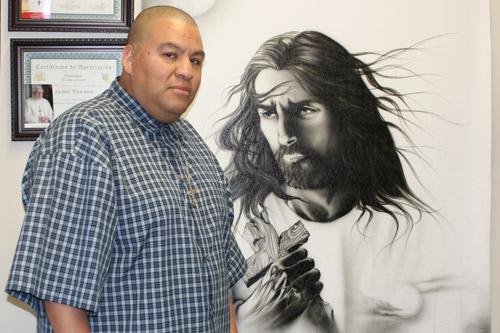 Aprille Hanson
Jaime Torres, associate director of faith formation, stands by an airbrushed painting in his office at the diocese. The image of Jesus, created by a friend in Mexico, is used at Fuerza Transformadora events.

Aprille Hanson
Jaime Torres, associate director of faith formation, stands by an airbrushed painting in his office at the diocese. The image of Jesus, created by a friend in Mexico, is used at Fuerza Transformadora events.

In November, Catholic Extension in Chicago partnered with the Diocese of Little Rock, where Torres has worked since 2010 and currently serves as the associate director of faith formation, to provide grants to dioceses throughout the country that want to implement the Fuerza Transformadora (Transforming Force) ministry in their communities.

“It was a plan. The first time the priest told me there was a plan for me, I never stopped. I never stopped looking for that plan,” Torres said. “It’s to show evangelization is on the streets, not in the offices.”

Catholic Extension Vice President of Mission Joseph Boland said Fuerza Transformadora has had “an extraordinary impact” in Arkansas, which is why the papal society wanted to form this partnership.

“It is part of the Church’s mission to accompany those on the margins, and, in a particular way, those trapped in cycles of violence, addiction or gang life. Fuerza Transformadora responds beautifully and effectively to those who have nowhere else to turn,” Boland said in a statement to Arkansas Catholic, adding praise for Torres’ work. “This one-time gang leader turned into a fervent Catholic evangelizer is a powerful witness of what God’s grace is capable of accomplishing. No doubt, Fuerza Transformadora has become an instrument of God’s grace for many at-risk youth, by promoting healing, recovery and reconciliation.”

Torres’ story has served as inspiration for hundreds of Hispanic former gang members.

As a 20-something-year-old gang leader from California, Torres felt Jesus’ presence in his room one night after being released from jail in Rogers.

“That’s the first night I talked to Jesus. I said that if he exists, I would like to get out from drugs and that’s when I felt someone was inside my room. And then I felt that I was loved by someone, that someone cares for me,” Torres said. “Then the (next day) I started going to Mass. That was something I told him — if you get me out of drugs and gangs, I’m going to start going to Mass.”

But his journey to a church community was met with several Catholic and Protestant church ministries and youth groups rejecting him, not wanting to be associated with a drug-addicted gang member who had been in prison.

After going back to California to attend a retreat that reached out to gang members to learn about Jesus, Torres wanted to bring his newfound faith knowledge to the streets in Arkansas.

So in the early 2000s, Torres began his outreach to other gang members to bring them into the church with the blessing of St. Vincent de Paul Church in Rogers.

Officially in 2006, Torres made sure the kind of closed-off attitude he encountered would never happen again to others wrapped up in street life with the creation of Fuerza Transformadora, which reaches out to people struggling with addiction and violence to learn about God and change their lives. Since its inception, there are about eight established programs throughout Arkansas as well as Texas, Tennessee and Illinois.

Dioceses that applied by March 4 and are approved will receive a three-year, $30,000 grant to establish the ministry (offered in Spanish for those 18 and older), which will include leadership training for those who will make up the ministry team, assistance in coordinating and running the Survivors Retreat and on-going consultation to make sure the ministry is thriving. This is where Torres comes in.

One of the most important parts of this ministry has been the Survivors Retreat. Though Torres was baptized in the Catholic faith as a baby and received his first Communion, his knowledge of Jesus was limited. Torres had started going to Mass and participating in religious workshops, which were informative about the Catholic faith but not specifically about Jesus and his teachings.

“That’s the problem right now with our Catholic Church,” Torres said, explaining that the Church jumped right into asking him about what sacraments he had received rather than finding out what his basic knowledge was of God. “I told them, ‘You know what, I just want to know about Jesus, not the sacraments right now.’”

Through his ministry, Torres began speaking with a teacher at a university in Mexico for advice and was told, “You have to teach them to know about themselves first. When they accept they have a problem and there’s no one that’s going to help them, talk to them about Jesus.”

The first Survivors Retreat, based on sharing information about the seven deadly sins, was held in the mid-2000s in Little Rock.

“We told them at the retreat that we’re not here to survive, we’re here to live,” Torres said. “At the end the last thing we talk about is Jesus. You know there is a person who loves you and understands you. He was poor … he was running away from people who wanted to kill him, he was in jail and suffered … he was left alone by his friends. Jesus saved me and he’s here to save you.”

Torres, now married with a son, remembers back when he first encountered God and how the priest told him that God had a plan for his life. And despite all the closed doors and struggles, Torres said he believes in the vision God has for him and this ongoing ministry.

“Every day he gives me gifts. That’s something he never stops,” Torres said. “Every time I wake up and open my eyes, another gift.”