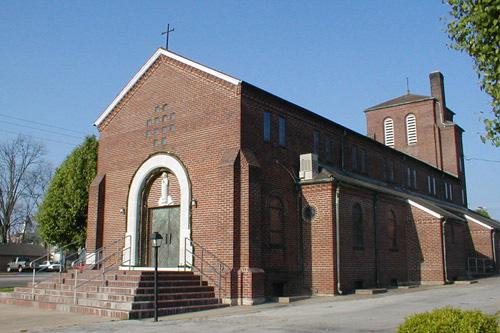 Sarah Morris
St. Mary Church in Paragould has been named to the National Register of Historic Places, the nation’s official list of historically significant properties. According to its nomination packet, it is one of only two buildings in Arkansas designed by renowned architect and designer Charles Eames.

Sarah Morris
St. Mary Church in Paragould has been named to the National Register of Historic Places, the nation’s official list of historically significant properties. According to its nomination packet, it is one of only two buildings in Arkansas designed by renowned architect and designer Charles Eames.

“It’s a wonderful church,” Goodson said. “I raised my kids here and it is our church family. I’ve been in other parishes and prefer this one because the people in it seem to be connected to each other and the parish, which is a good thing.”

Goodson moved to Paragould in 1978. Her family is one of about 300 families who attend the historic church at 301 West Highland in Paragould. Built in 1935, the 182-seat church has now been listed on the National Register of Historic Places, the country’s official list of historically significant properties.

“St. Mary’s Catholic Church in Paragould, Ark., is one of only two buildings designed by renowned architect and designer Charles Eames in Arkansas,” according to the church’s nomination packet. “The church is also an important example of Eames’ architectural philosophy ... and an excellent example of a late Romanesque Revival church with early modernist influences.”

Eames also designed St. Mary Church in Helena-West Helena. Pastor Father Mike Sinkler of Paragould said, when asked if the church could be nominated, his first thought was “Wow.”

“That is a tribute to the people who have cared and maintained this facility for the past 80-plus years,” said Father Sinkler, who joined the parish five-and-a-half years ago. “We are a growing community and one of the concerns is if we outgrow the church, what happens?

“We are not there yet, but this says we still care about this building and treasure it. The community has put a lot of time and effort into caring for this building.”

Regardless of the church’s future growth plans, Father Sinkler said the building — which is significant to the church’s history — would continue to be used in some capacity.

“It is very deeply rooted,” he added. “There are many members who can trace it through their family heritage. Names that come up in the church history are still here. Many families have been here since the 1890s.”

Patricia Farley belongs to one of those families — her grandfather’s name graces one of the bells within the church.

Farley, 77, was born two years after the church was built. She said some of her best memories are of her family gathering to attend Mass together.

She has attended St. Mary her whole life, served as the church custodian for 30 years and remains an active volunteer.

“It is just one big family,” Farley said. “When there is trouble, they rally around you from births to deaths. If there is a need, they are going to be there.”

Farley said the church has a rich history. The first Mass in Paragould was held in December 1883 in the Commercial Hotel.

By 1889, the number of Catholic families had increased enough to afford a church building. A lot at the corner of West Highland and Second Street was bought for $300.

The original church, built and deemed unacceptable by another denomination, was bought and moved to the location for $625. In 1895, a tall spire and belfry were added.

Msgr. Joseph Hoflinger, who served as pastor from 1914 until his retirement in 1956, arrived to find the parish $10,000 in debt. According to the church’s history, he erased the debt within six years and began a building fund for the parish’s future needs.

It was on track to be reached by 1930 but was lost in the 1929 stock market. The funds were redeemed within five years. Construction on the existing building began in 1935 and was finished within one year.

Not much about the church has changed since it was constructed. Farley said it looks exactly the way it did while she was growing up except it no longer has a communion rail and the priest now faces the parishioners.

Mass also is no longer celebrated in Latin, she added.

“When you walk in our church, to me, it feels like it opens its arms and welcomes you in,” Farley said. “I’ve had people from other parishes tell me it just looks peaceful. Even when we lived away from here, when I walked into this church, I felt like I was coming home.”