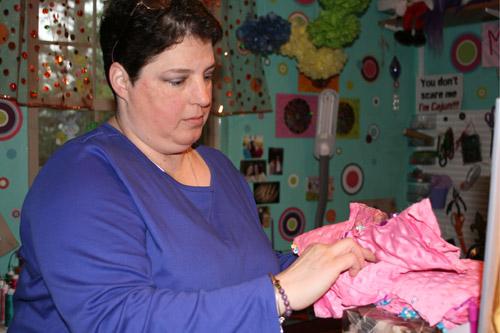 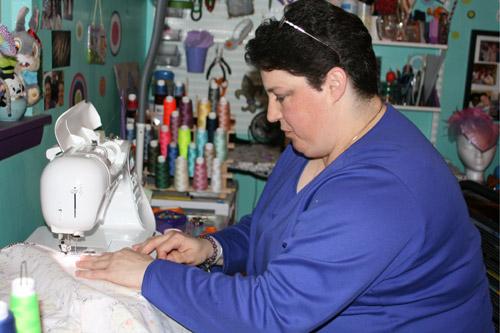 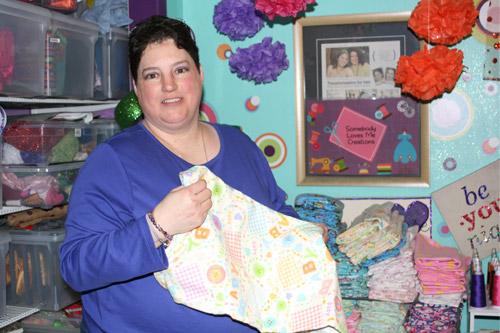 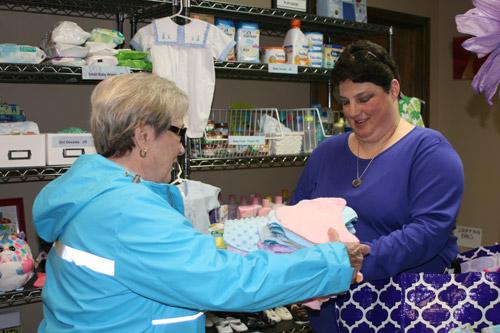 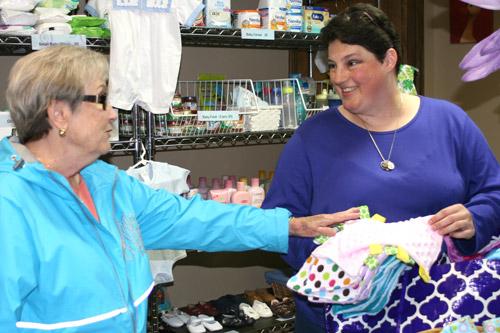 To make the perfect receiving blanket for women who choose not to abort their babies, all Melissa Ziegenhorn needs is some fabric, a needle, thread and, most importantly, prayer.

“I take each blanket, and I bless each one with holy water,” Ziegenhorn, 43, said. “I say a prayer over them, I hope that this brings them comfort, security and happiness and God watches over them.”

It’s all part of her nonprofit Somebody Loves Me Creations, where she sews thousands of blankets, burp cloths and “lovies” to donate to pregnancy resource centers in her home state of Louisiana, Missouri and Arkansas. She chose the name to drive home the point, “Somebody loves me enough to bring me into this world.”

Ziegenhorn is known at the Arkansas Pregnancy Resource Center (St. Joseph’s Helpers) in Little Rock as the “blanket lady.” It’s a name she welcomes instead of her titles of the past — abused wife and a woman who was almost forced to abort her daughter.

“I was really insecure about going the first couple times. I have PTSD from my ex-husband and I’m working through him and his friends pressuring me to get an abortion,” said Ziegenhorn, who fought to keep her daughter Kayla, now 23. “It sometimes just triggers flashbacks.”

“Somebody Loves Me Creations” became an official nonprofit in July to help Ziegenhorn, a member of Christ the King Church in Little Rock, offset some of the costs of fabric and materials, which can be about $300 a month. She sewed her first baby blankets in 2013 for a co-worker who was single and expecting.

“I couldn’t stop. It was one cute pattern after another,” Ziegenhorn said. “I ended up with a really big bag of blankets.”

“My Girl Scout troop went to give an Easter party for domestic abuse women at the shelter with their kids. One of the girls was holding tightly to one of my grandmother’s blankets. I just thought that was so special,” she said.

At that time, Ziegenhorn could not have imagined she’d find herself in the same predicament as the women who were at that shelter. While married to her now ex-husband, she endured years of abuse.

“Being an abused woman, people can try and give you advice, sometimes it’s really hard to make that decision (to leave) because you are scared. There’s a degree of mind control. I know I was controlled. I could not make any decisions. I knew we were going to get divorced. He hit me so hard that last time I almost did die,” she said.

But before the last straw, just two years into their marriage in 1991, Ziegenhorn became pregnant and her husband did not want children.

Her then-husband and a friend took her to an abortion clinic in Louisiana.

“He was getting really irate. I was too scared of him at the time. They (the clinic staff) actually made them go to another room. A nurse asked, ‘Tell me, do you want to go through with it?’ I said no.”

The clinic refused to do an abortion because they could not detect how far along Ziegenhorn was in her pregnancy.

They divorced in 2002 and she moved to Little Rock to be near her parents in 2005, just eight weeks before Hurricane Katrina.

“I wouldn’t give her up for anything,” Ziegenhorn said.

When she began as a tutor at Christ the King’s Building Bright Futures tutoring program, she met Ron Ziegenhorn, who was a substitute, and the two married in 2008.

“She deserves at least one decent marriage,” said Ron Ziegenhorn, who helped his wife get her nonprofit status and serves as its treasurer. “I’m proud of her. She’s happiest when she finishes a blanket.”

Though the couple tried to have a child, they could not get pregnant.

“It was an emotional time for both of us. Father Josh (Stengel, now a pastor in Mount Ida, Glenwood and Mena ) would come over to dinner after Mass, and we’d talk about it. He said, ‘You know God has other plans for you Melissa … you may not have children, but you can help other children.’”

Between her grandmother’s legacy, her own abusive relationship and avoiding abortion, her co-worker’s need for baby blankets, their inability to have more children and Father Stengel’s advice, Ziegenhorn said her calling was “the perfect storm.”

“Even if you don’t want to keep the baby, there are people that do want children. I keep seeing the pictures they use to protest with, and to me it’s killing a part of yourself,” Ziegenhorn said. “I’m very shy, I’m very bashful. I’m not a big protestor; I feel like doing the blankets, burp cloths and lovies are my way of protesting abortion.”

A Catholic you want to know: Mary Alyce Shenker