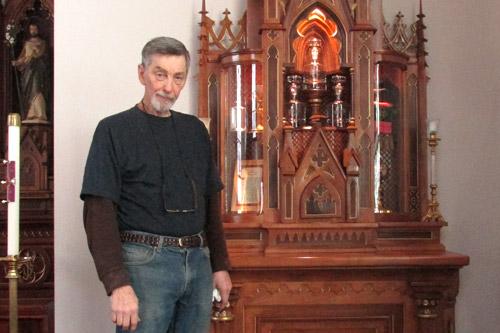 Maryanne Meyerriecks
The ambry created by Richard Millé is a perfect match for St. Joseph’s altar and the other two altars in the sanctuary at St. Boniface Church in Fort Smith.

Maryanne Meyerriecks
The ambry created by Richard Millé is a perfect match for St. Joseph’s altar and the other two altars in the sanctuary at St. Boniface Church in Fort Smith.

Family: Richard has been married to Judy for 45 years. They have two daughters, Resa Green, and Danielle (deceased); and two grandchildren

Why you want to know Richard: He just completed building and installing a hand-carved ambry (holy oils cabinet) of alder wood in his church. The ambry matches the hand-carved altars that were imported from Germany many years ago. It was blessed at Mass Feb. 15.

In his own words

Arkansas Catholic’s theme this year is “Worth it.” What investments of time or money have you made recently to enrich your faith?

After many years attending another parish, we returned to St. Boniface a year and a half ago. Our daughter Danielle had just passed away, and Deacon John (Burns), Father Jon (McDougal, former pastor) and the St. Boniface parishioners were so kind and wonderful to us in our sorrow. Deacon John, an old school friend, told me that he had recently visited Father David Bellinghausen when he was dying. Father Bellinghausen told him that he had always felt St. Boniface Church really needed an ambry to replace the little table we used in its place and Deacon John told him he knew the man who could do it. The church paid for half the materials, and I got to work. Completing the ambry took five months.

Why do you think you were selected for this project?

Since I am almost completely retired, only going into the office once a month or so, I found a new life helping the maintenance volunteers at St. Boniface and building the ambry. Father Jason (Sharbaugh, pastor) has another five years of projects lined up for me.

What do you do for an occupation?

I am still a partner in an engineering firm, Mid-South Steam Boiler and Engineering but have been essentially retired as I recover from squamous cell cancer in my soft palate. I was first diagnosed in 1995 and suffered a little setback after Danielle’s death. I’ve had to use a feeding tube for the past year and have had to have my throat stretched.

What are your hobbies?

I’ve been a carpenter since 1980 and spend lots of time in my workshop. Sometimes I’m not sure how to move forward on a project, but when I go into my workshop a design just comes to me. Father Jason said that God was building the ambry through my talent. I know God will show me where to go.

What is your favorite Scripture?

Our favorite Bible passage is Luke 1:26-38, the angel Gabriel’s visit to Mary and her acceptance of God’s will for her life. After Danielle’s death, we felt Mary’s comforting presence. Mary told us that she understood what we were going through because she had lost a child, too.

About two weeks before I finished the ambry Deacon John told Judy and me that he and Father Jason had decided to put a plaque on the ambry saying “In Memory of Danielle Millé.” It was very emotional for both of us.