Horseradish, salt, eggs all have religious meaning in Easter baskets 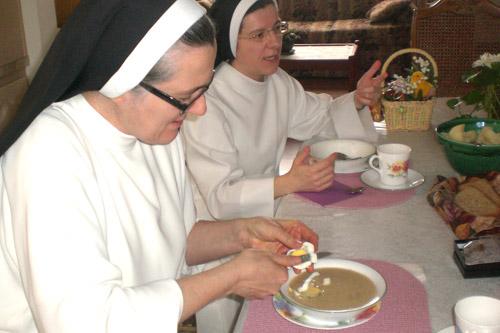 Swieconka will be observed at these Arkansas parishes on Holy Saturday, April 4.

What to put in your basket

According to the Polish American Center, the following foods and items will create a traditional Polish Easter basket:

MOUNTAIN HOME — When Catholics think of Christ and his life, images like the crucifix, tabernacle, palms and Holy water are common.

But let’s not forget horseradish, salt and eggs — known as chrzan, sol and jajka in Polish.

These are translated to represent the Passion of Christ, prosperity and justice and a reminder that people are the salt of the Earth and Jesus’ resurrection and new life.

These are just a few of the foods typically found in traditional Polish Easter baskets. Catholics in Arkansas bring their baskets to participating parishes throughout the state each Easter to be blessed in what’s known in the Polish tradition as “Swieconka” (shvyehn-SOHN-kah), according to the Polish American Center. In Poland, it’s celebrated by all Catholics.

“On Holy Saturday we are taking to the church all the eggs, ham, sausage … everything has meaning. Later after Father blessed (the basket) we’re not supposed to eat. We have a day without meat, keeping everything for the next day when Jesus will raise up, and we’ll enjoy soup with all the blessings,” said Sister Klaudia Klapacz, a Polish Dominican sister serving at St. Peter the Fisherman Church in Mountain Home, who along with Sister Agnes Koziel, continue their country’s traditional Easter basket blessing every year.

Traditional baskets hold a variety of foods, including Easter bread, butter (shaped like a lamb or cross in some areas), smoked bacon and cheese. A candle, representing Christ as the light of the world, is also included as well as colorful ribbons or sprigs of greenery to represent new life. Often, the basket is lined with linen or fabric and covered with a white cloth representing the shroud of Christ.

“Here we just have a few people bringing baskets but in our church (in Poland), everybody was coming. It was like big procession after, lots of people coming with their kids and dressed nice,” said Sister Klaudia, who is from Biała Niżna, a village near Grybów, Poland. “There were (Easter basket) blessings all the time; from the morning, every half hour people were coming. The whole day was blessing and with the exposition of the Blessed Sacrament, people were coming for adoration with Jesus. From Holy Thursday there was overnight adoration over three days until Jesus is risen from the dead,” on Easter morning.

According to an article by Barbara Rolek, an Eastern European food expert, the origins of the Polish Easter basket blessings date back to at least the 15th century.

Father Stan Swiderski, originally from Poland and the retired former pastor of St. Peter the Fisherman Church, wrote several years ago about the Polish tradition for the church’s Easter news release:  “The Polish and Italian people in the Old Country, and even some of today’s generation in our country whose ancestors migrated to America, were accustomed to observing a strict fast during the weeks of Lent. On Holy Saturday, traditional foods were taken in baskets to the church, where they were offered in thanksgiving to God in a ceremony of blessings by the priest. These blessed foods were then reserved for eating after the Easter Mass.”

The sisters said as young children, it was tough to not eat after the blessing.

“You cannot touch any kind of food,” said Sister Agnes, from the small village Jaworznia, Poland. “You come back from the church on Easter morning and then eat the soup.”

The soup, known as white barszcz, was typically prepared with the contents of the traditional Easter basket and the blessed food was eaten on Easter Sunday after morning Mass. The sisters both said the homemade Polish sausage was always a favorite.

“It was a temptation because we were coming from the church, walking about two miles to get home and everybody was there with a bunch of kids, we were looking at what each one had in their basket and it smelled so good it was like ‘oooh so much temptation,’” Sister Klaudia said. “We had a small farm, so only twice a year my parents butchered an animal, especially a pig, and they made Polish sausage because there was no refrigerator there. They dried the sausage in the attic.”

One of the most popular foods is babka or Easter bread, usually homemade and “topped with a cross or a fish, symbolic of Jesus, who is the Bread of Life,” according to the Polish American Center.

“We usually had like a special cake, sweet with raisins and my grandma usually baked it and it was always (eaten) on Easter Sunday,” Sister Agnes said.

The blessed eggs, known as jajka, were sliced into pieces for families to share.

All the unused parts of the food, such as the skin from the Polish sausage, could not be thrown out but rather burned because it was blessed by the priest, Sister Klaudia said.

In Arkansas, a few parishes have been blessing baskets for years.

However, Kelly McClintock, secretary at St. John the Baptist Church in Hot Springs, said turn-out has been lower the last few years.

“It’s dwindled a little bit, I think people are so busy, they kind of lose the old traditions. It would be great to see younger families and individuals coming out” for the blessing, she said.

For converts like McClintock or even those that don’t know the tradition, the word “Easter basket” can have a whole different meaning.

“I assumed it was the bright Easter basket with the plastic eggs, chocolate bunnies that I was giving my son,” McClintock said. “That’s when I learned it wasn’t really for Ninja Turtles,” she said, showing up one year with her son’s basket. “Now that I do the bulletin, I try every year if we have space to explain a little of the tradition so folks don’t end up with egg on their face sort of speak like I did.”

However, Father Thomas Hart, pastor at Immaculate Heart of Mary Church in Marche, said he has blessed a variety of baskets, but most are filled with the traditional foods. He has been there four years, but the church has been blessing baskets for 22 years.

“It’s good to have the people together for a blessing of the food they’ve prepared that God has given to them and carrying that back to their tables,” Father Hart said. “It’s about breaking bread together.”

Because the dinner table is the “central part of the family,” he said the tradition is a great way to celebrate “the Easter joy that the Lord has given us.”

Though younger families may not be carrying on the tradition like the older generations, it’s a powerful reminder of God’s love and sacrifice, Sister Klaudia said.

“I enjoy doing it because I know the Father is blessing us,” Sister Klaudia said. “It unites us; we become one with Christ.”

Swieconka will be observed at these Arkansas parishes on Holy Saturday, April 4.

What to put in your basket

According to the Polish American Center, the following foods and items will create a traditional Polish Easter basket: