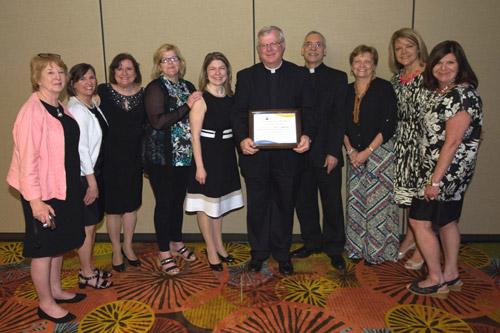 When Msgr. Francis Malone took over as pastor at Christ the King Church in Little Rock in 2001, he was stepping into the shoes of the revered Msgr. J. Gaston Hebert, who had been building up a legacy of faith and education at the school and church for 20 years.

For this reason, Msgr. Malone said the National Catholic Educational Association Distinguished Pastor Award doesn’t feel like a solitary honor. It’s one to be celebrated for the work that he, Msgr. Hebert, principal Kathy House, the faculty, students and parents have put in to make CTK School both well-respected and the largest Catholic elementary school in the state with 656 students.

“It’s an honor to receive the award. I’m flattered and humbled by that. I have told people the entire time I’ve been at Christ the King, I owe so much to Msgr. Hebert for setting the vision for the church and school,” which Msgr. Malone said was one of nurturing the teachings of Jesus by living out the Catholic faith for students and employees coupled with high academic standards. “I share that vision.”

Every year, the NCEA, a professional organization providing leadership, direction and service to Catholic educators, recognizes pastors, principals and teachers who “demonstrated a strong Catholic education philosophy as well as exceptional ability, dedication and results,” according to the organization’s news release. This year, Msgr. Malone was one of 12 pastors to receive the honor and the only one from Arkansas.

“Monsignor has done amazing work in furthering Catholic education in the region. He works collaboratively with the administration of Christ the King School and is present and engaged with the families there,” interim director of the NCEA Elementary Department Jim King told Arkansas Catholic. “In addition, he has improved the academic life of the school enabling foreign language instruction, programs for special education and a state-of-the-art safe room as protection against the region’s frequent tornadoes. The main impact of his work, however, has been his lasting spiritual impact on the lives of school families.”

Some notable accomplishments at the school have been:

“If we spend all this money on these projects but our children were not any safer and something happened, all these projects wouldn’t be worth it,” Msgr. Malone said.

It’s this dedication that led House, who has been there for 20 years, to nominate Msgr. Malone for the award.

“I couldn’t think of a more supportive pastor than Msgr. Malone. He checks in with me either in person or by phone daily, even if he is out of town,” House wrote in her NCEA nomination letter. “His backing and support are critical in allowing me to perform my duties as principal.”

Since being ordained in 1977, Msgr. Malone has worked in a variety of educational environments, from pastoring/teaching religion at schools like Immaculate Conception School in North Little Rock and Mount St. Mary Academy in Little Rock and mentoring seminarians as vice rector at Holy Trinity Seminary in Irving, Texas. As rector of the Cathedral of St. Andrew in Little Rock for seven years, he developed an active RCIA program, Scripture study and adult faith program.

“My work at the various schools, the seminary, the cathedral were all built on the foundation of what I learned as a child in the Catholic schools systems,” Msgr. Malone said.

He was one of nine children in his family educated in Catholic schools in Philadelphia.

“We lived in a very Catholic neighborhood. It wasn’t a question we’d be going to Catholic schools,” Msgr. Malone said. “I was incredibly blessed with wonderful teachers, the Sisters of St. Joseph and then the Oblates of St. Francis de Sales in high school … Our life was very intertwined by what was going on in the parish. It was a culture. In retrospect, it complimented what my parents were already doing at home — teaching prayer and living our faith.”

While House handles all the educational and background check requirements in hiring faculty, the pastor is focused on applicant’s religious faith, which has led to low turnover, he said.

“Ultimately it’s my school. That’s the way Msgr. Herbert used the school. Not in a possessive way, but my school in the sense I’m responsible for it. I want to make sure the teachers we hire are committed to not only teaching the Catholic faith but to living the Catholic faith,” Msgr. Malone said, adding all CTK teachers are Catholic. “It’s not to exclude non-Catholics per se, but to say if we’re going to remain Catholic we want active Catholic men and women.”

Msgr. Malone attends school functions and enjoys popping his head into second-grade classrooms to make sure the kids preparing for first reconciliation and Communion remember their mantra — “I say, ‘Tell me about being in second grade’ and they’ll say ‘It’s the best year of my life.’”

This mentality was fostered from his own second-grade experience with his teacher, Sister Leonissa O’Brien, SSJ. In 2007 while at the NCEA convention in Baltimore, Msgr. Malone took CTK faculty to meet Sister Leonissa, who was in Washington, D.C., at the time and hadn’t seen her former student for more than 40 years.

“On a lark, I pulled up in front of the convent, the rectory where she was working. She looked at me and said, ‘Francis Malone,’” he said with a laugh. For his 50th anniversary of his first Communion that next year, Msgr. Malone flew her into Little Rock.

“I had her come and be a part of the homily and talk to the children about what she taught me,” he said.

He said his favorite time with students is sharing the faith, which can take many forms — anointing the sick after Mass to children preparing for surgery, hearing confessions and giving interactive homilies at school Masses.

Msgr. Malone said he plans to continue to build on CTK’s success in a variety of ways, including keeping up with the latest technology for students. And though the award is an honor, it can’t compare to the blessings he gets every day from Christ the King students.

“I had one child write to me and she said she doesn’t have a father and she considered me to be her spiritual father. You get something like that and it makes a difference,” Msgr. Malone said. “It’s just the way the children treat me. I don’t need any parties or big celebrations — I get that every day when I walk over there.”