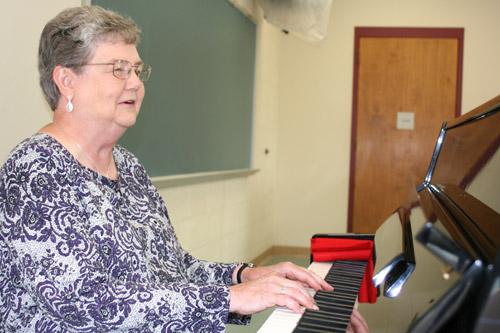 Aprille Hanson
Connie Jones, who retired in June, returned to Our Lady of the Holy Souls School to play a tune for Arkansas Catholic.

Aprille Hanson
Connie Jones, who retired in June, returned to Our Lady of the Holy Souls School to play a tune for Arkansas Catholic.

Parish: Our Lady of the Holy Souls Church

Arkansas Catholic’s theme this year is “Worth it.” What investments of time or money have you made to enrich your faith? I’ve gone to plenty of workshops and we have Scripture study here that we’ve gone to for years. Of course, we go to our missions when we have them.

What is something special you remember when you did convert to Catholicism? I was 19. I’ve been a Catholic for a long time. I went to RCIA because my husband was Catholic and I really didn’t want our family split. So after I went to RCIA, I thought it’s really not that different. There were a few things I had to get over. I grew up Methodist so the basic faith is the same. I like the way (Catholicism) honors Mary, which we didn’t do. I like the true presence in the Eucharist.

When did your love of music begin? When I was born; my mom played piano, my dad and mom both sang, my grandfather played violin, my grandmother played piano. We just always sang and played, we were a musical family. I play piano and clarinet and sing. I’m a soprano. I can play guitar a little.

Do you have a favorite church hymn? I guess “We Are Called” (by David Haas) because I think we are all called. I just like the way it talks about how we are called to go minister to everybody.

Is there anything you liked to do with the kids, anything that got them excited about music? I like songs that have a lot of actions. The kids like to dance when they’re singing. Some songs have movements that go with them; other songs are just free movement. They have lots of movements. I think the funny one is when they act like frogs — they’re trying to sing and hopping around the room at the same time.

How did working with these young students (kindergarten – eighth grade) strengthen your faith? Because you saw the way that they grew in their faith; they grew from little kids, I had them for nine years, so you got to watch them grow from a little kid who was really excited about Jesus and their faith to a teenager who realized what their faith was.

Do you have any hobbies? (My husband and I) ride motorcycles and we camp. We have a Can-Am Spyder. This one has two wheels on the front and one in the back. We’ve had it for about a year and love it … Yes, I drive. When we were dating, I rode on the back of his. But then when he wanted to get back into it I didn’t want to ride on the back. Now I’m riding on the back again (but driving occasionally).

What are you going to do in retirement? We have Alaska and about five or six other states to make all 50 states. So we’ve got to do the West Coast and then Maine, Vermont and that’s about it.