Monk’s ordination will be special day at Subiaco Abbey 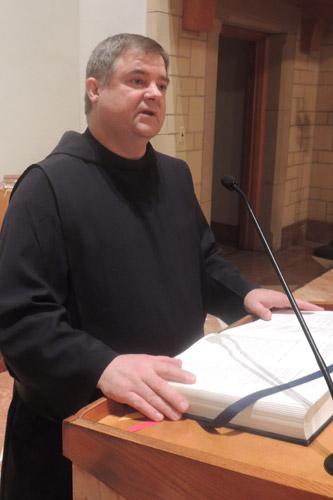 Brother Patrick Boland stands at the pulpit at Subiaco Abbey. On June 20, he will be the first Benedictine priest ordained at Subiaco in 30 years.

Brother Patrick Boland stands at the pulpit at Subiaco Abbey. On June 20, he will be the first Benedictine priest ordained at Subiaco in 30 years.

Brother Patrick Boland said his decision to profess his vows as a brother at Subiaco was not a big epiphany, but rather a comfort from God.

“For me it was a warm feeling, not like getting knocked off a horse or struck by lightning,” Brother Patrick said. “Subiaco was just like an old shoe; it just feels good.”

On June 20, Brother Patrick will step into a new shoe — being ordained a Benedictine priest.

It will be the first time a Subiaco monk has been ordained a priest in 30 years. The most recent ordination was Father Aaron Pirrera in 1985.

“The difficult part for me was accepting the awesome responsibility a priest has and thinking, ‘I’m not worthy.’” Brother Patrick Boland, OSB

“If (retired Abbot Jerome Kodell) didn’t tap me on the shoulder and say would you consider this,” he wouldn’t have been ordained, Brother Patrick said. “I was completely happy working on the farm, teaching at the school and working with vocations … Over the course of four years it’s something I desired to do because I saw the value of being a priest for the community.”

He admits his life has taken some detours and pit stops on his road to religious life. Originally from North East, Pa., Brother Patrick volunteered for church youth groups and worked in campus ministry at a Catholic high school in Macon, Ga. In July 2003, he attended a retreat at Subiaco, but he was adamant about not becoming a monk and told that to his spiritual director.

“With all my sarcasm an Irishman can muster, I said, ‘What do you mean like a monk?’” Brother Patrick said. “It was the furthest thing from my mind.”

However, that first retreat lit a spark.

“The real attraction was the community prayer, the communal prayer,” which strengthened his faith, he said. On Feb. 2, 2010, he professed his solemn vows as a Benedictine monk at Subiaco Abbey. His real affirmation came from his father, who Brother Patrick admitted was not usually “generous with compliments,” despite his loving nature.

“My father said about five or six years ago, ‘you’ve had a lot of careers, life experience, but I’ve never seen you happier than you are now,’” Brother Patrick said. “That was a huge affirmation that I was doing the right thing.”

While at Subiaco, Brother Patrick has earned a bachelor’s degree in professional studies and an associate’s degree in applied science for heating, air-conditioning, ventilation and refrigeration at Arkansas Tech University, to help with maintenance at the abbey, he said. Brother Patrick, 52, then taught religion and Scripture at Subiaco Academy before joining St. Vincent Seminary in Latrobe, Pa., in the fall of 2011.

“The difficult part for me was accepting the awesome responsibility a priest has and thinking, ‘I’m not worthy,’” he said, adding that Father Kodell and his spiritual director Father Mark Stengel explained, “It’s only through God’s grace we can do this work. I said, ‘Well, I guess that’s not a reason to quit.’”

Brother Patrick said he has “no idea” what he’ll be asked to do as a priest — whether it’s working at the school, on the abbey’s farm or serving in a parish, but he said he’d like to stay and serve the community if it’s God’s will. Brother Patrick said 15 priests, including the abbot, are monks of Subiaco Abbey.

“I don’t have any real aspirations. My goal is to accept whatever I’m asked to do,” Brother Patrick said, adding he’ll pray about “being open to that, because what if it’s something I don’t want to do. I want to be able to say yes.”

However, Brother Patrick said during his studies at the seminary he developed a great respect for the permanent diaconate program and would enjoy assisting it. In addition to his brother monks, he said he’d be able to minister to married parishioners, as he was married for five years and divorced.

“I think that I offer some perspective on what it’s like to be married. I would never try to put myself as some kind of expert on marriage. Some guy asked me what card to get his wife. I said, ‘Don’t ask me, my marriage didn’t work out so good,’” Brother Patrick said with a laugh. “I think I do understand some of these things a married couple has to deal with. The emotions that shift from meeting, dating, engagement, marriage and then three to four years down the road after marriage. The relationship changes, as it should. I might have some insight into the emotional roller coaster couples have to go through.”

Though he’s “nervous” about all his firsts as a priest, from Mass to confession, he’s looking forward to this new journey with God.

“Identifying myself in the personhood of Christ as a priest, that’s a pretty awesome concept. You’re a minister on the altar, you’re an instrument through which God’s grace works,” Brother Patrick said. “It’s a pretty awesome idea being Christ to others beyond a lay person. Just like a baptism does something, it may not be visible on the outside but it’s real.”

Maranda Pfeiffer: You can count on her