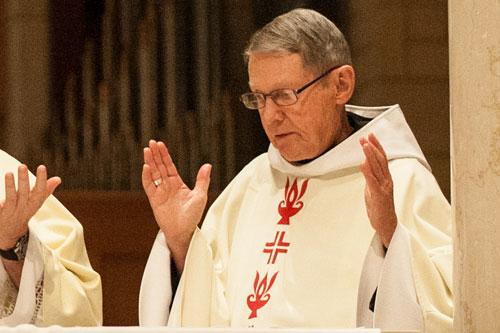 Father Jerome Kodell celebrated his 50th jubilee as a Benedictine priest in May and can look back with happiness at his 25-year run as abbot of Subiaco Abbey.

To think, he could have been an ice salesman.

“I remember as I kid I wanted to be an ice salesman. You know that sold the blocks of ice (for refrigeration years ago). That was one of my ambitions, so I didn’t have serious ones,” he laughed.

Thankfully he found not only longevity, but a spiritual awakening in living a religious life.

Growing up in Clarksville, Father Kodell attended elementary school and church at Holy Redeemer. He looked up to his parents for their faith and that of the Benedictine sisters and pastor.

“They gave me a lot of encouragement to follow a vocation,” he said. “(My parents) were very authentic in their faith, very consistent; they supported me in my faith and didn’t force me in any way.”

In the mid-1950s, he walked through the doors of Subiaco Academy to attend high school.

“I didn’t know much about any other orders, but I did know these men were very dedicated, they were there for a bigger purpose,” Father Kodell said. “They prayed and worked together and played together and it was all for the Lord. And that was very reflective for me.”

When he was 15 years old, he first seriously recognized and considered God’s calling.

“I’ve studied a lot of the Acts of the Apostles. It’s the early Church and in there you discover how people gradually moved into the life of the Church,” Father Kodell said, recognizing that we have similar issues even today. “You sense the great courage the disciples had striking out into unknown territory.”

His training as a Scripture scholar prepared him for being a lecturer, his work with the world-renowned Little Rock Scripture Study and as author of several books.

“It’s very significant for me. I’ve had the opportunity to give the lay people the benefit of some of the things I studied and that is a great grace,” he said of his work with LRSS.

In 1987, Father Kodell was sent more than 2,000 miles away to Santa Familia Priory, Subiaco’s mission in Belize, where he served as prior. He did a lot of carpentry and gardening while also caring for a small Spanish-speaking church.

“It was a great shock to me, but also appreciated the fact that it’s what the Lord wanted and what my brothers wanted,” he said. “It was humbling to me that I was called to do that.”

Father Kodell did not restrict his leadership to inside the abbey’s walls. He has held executive positions in the Conference of Major Superiors of Men and locally he’s been active in the Chamber of Commerce, Rotary Club, the Ministerial Alliance, Promise Keepers and the Court Appointed Special Advocate program.

After resigning as abbot, Father Kodell said he is continuing to work in a development role with the abbey, including woodworking to be sold in the abbey’s gift shop and urns for the abbey’s columbarium.

“I like woodworking … I make the caskets,” for monks and he’s done so since the late 1970s, he said. “And that’s a very special thing because I know that it’s going to be one of my brothers laid in that coffin or else myself. It’s a spiritual thing and I take it very seriously.”

It’s these simple, yet profound gestures that have defined his priesthood.

“I’m extremely grateful, I know there are a lot of other things I could have done, but this has been a wonderful life,” Father Kodell said. “I guess I’m just eternally grateful I was called and have all the people around me to give me the strength — I didn’t do it by myself.”