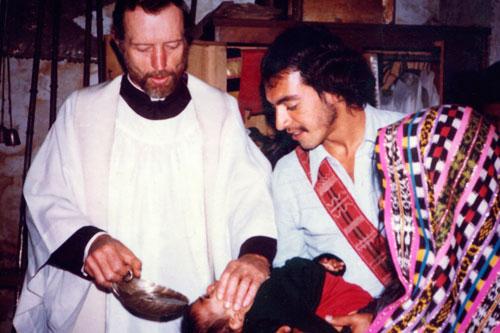 An Oklahoma priest could be the first Catholic martyr from the United States, and Bishop Anthony B. Taylor wants more people to know about the sacrificial pastor.

Servant of God Father Stanley Rother is one step closer to beatification. A special theological commission at the Congregation of the Causes of Saints voted June 23 to formally recognize Father Rother as a martyr.

“He gave himself fully to his people,” Bishop Taylor said. “He remained with them courageously in a time of darkness. When a wolf threatens a flock, the shepherd remains. He laid down his life for his people long before they came to kill him.”

After the determination of martyrdom is confirmed, Father Rother can be beatified, the final stage before canonization.

“Father Rother laid down his life for Christ and for the people of his parish in Guatemala, whom he dearly loved. It is very encouraging to move one step closer to a formal recognition by the Church of Father Rother’s heroic life and death as a martyr for the Gospel,” Archbishop Paul S. Coakley of Oklahoma City said.

Bishop Taylor, who was ordained a priest in 1980 in Oklahoma, met Father Rother briefly in 1981 at the ordination of Father Rother’s cousin two months before the Guatemalan missionary was murdered in his rectory.

Bishop Taylor, who is fluent in Spanish, traveled to Guatemala several times as the archdiocese continued to sponsor the mission in Santiago Atitlan.

“When we re-staffed the mission in 1984 I was going down there. Those were very tumultuous years in Guatemala,” he said. “The civil war was going on and there were lots of people killed. I wanted to make sure our priest was OK.”

For the 25th anniversary of the priest’s death in 2006, the archdiocese opened the sainthood cause and the archbishop asked Father Taylor to be the episcopal delegate for the cause. The priest personally interviewed 50 people in Spanish and Tz’utujil, a Mayan language, about their knowledge of Father Rother and examples of his virtues.

Father Rother served the people from 1968 until his death despite death threats during the country’s civil war. The rectory room where the priest was murdered is now a shrine.

After Bishop Taylor was ordained the bishop of Little Rock in 2008 he handed over the sainthood duties to another priest in Oklahoma City.

“I have not been back since 2011 (for the 30th anniversary of the priest’s death),” he said. “There will be a pilgrimage next year for the 35th anniversary.”

During a June 23 meeting in Rome, nine theologians gave a majority vote on Father Rother’s formal and material martyrdom in odium fidei (in hatred of the faith). The cause now must be approved by a panel of 15 cardinals and archbishops, who are members of the congregation.

The next meeting on the cause is expected in six months. If the panel agrees, the prefect will present it to Pope Francis, who will promulgate the decree of beatification.

Beatification permits public veneration and declares that the life of the blessed is worthy of imitation among the Christian faithful.

The June decision comes nearly a year after Archbishop Coakley presented a formal petition to the congregation along with an extensive document, or positio, which summarizes the facts and testimony concerning the life and death of Father Rother.

Bishop Taylor said he is hopeful the beatification Mass could be held in Oklahoma City in 2016 for the 35th anniversary of Father Rother’s death.