Seminarians make pilgrimage to Our Lady of Guadalupe 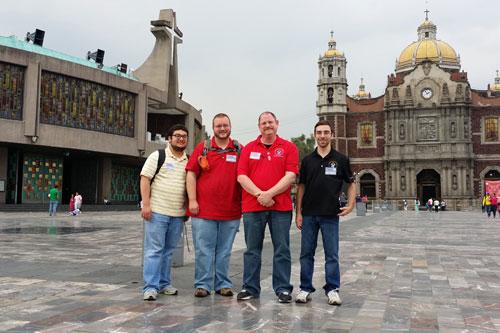 Seminarians Stephen Elser (left), Keith Higginbotham, Michael Davis and Joseph de Orbegozo went on a pilgrimage to Mexico City to see the old and new Basilicas of Our Lady of Guadalupe.

Seminarians Stephen Elser (left), Keith Higginbotham, Michael Davis and Joseph de Orbegozo went on a pilgrimage to Mexico City to see the old and new Basilicas of Our Lady of Guadalupe.

A small group of Little Rock seminarians recently took a “holy” detour from their immersion Spanish course in Guadalajara this summer.

Seminarians Keith Higginbotham, Joseph de Orbegozo, Stephen Elser and Michael Davis embarked on a pilgrimage to Tepeyac Hill in Mexico City, to visit the miraculous image of Our Lady of Guadalupe from June 26-29. The seminarians started their immersion course May 29 and will be coming back to the states July 31.

The Basilica of Our Lady of Guadalupe is one of the most-visited Catholic shrines in the world, with more than 20 million visitors each year.

The seminarians all attend St. Meinrad Seminary in St. Meinrad, Ind. They traveled along with 44 other peregrinos (pilgrims) in a bus all night, making the six-hour trek to the Basilica of Our Lady of Guadalupe in time for breakfast. On June 27, the seminarians spent time in the vicinity of the basilica, where the image of Our Lady resides, imprinted on the tilma (a type of cloak) of the simple farmer St. Juan Diego almost 500 years ago. However, the seminarians all agreed that the most significant moment of the trip was not when they saw the image.

“We got to go into the sanctuary on Tepeyac Hill and pray in the spot where Juan saw Our Lady,” Higginbotham said.

In the chapel atop the hill, the sanctuary marks the site where the Blessed Virgin appeared with child, a living tabernacle for Jesus. Upon learning that there were seminarians present, a basilica employee invited Higginbotham, de Orbegozo, Elser and Davis, along with four other St. Meinrad seminarians, to come into the sacristy. He then directed them to the sanctuary, where they all knelt and chanted “Salve Regina.” The employee then presented each seminarian with a rose, like the roses that Juan Diego received, miraculously growing on the hill in the winter of 1531.

“I’ve never had an experience like this before where everywhere we go, it’s the perfect place to pray for that next person on my list. And then some places you show up and you’re just like ‘This is the place that I need to pray for this person that I didn’t even have in mind,’” Higginbotham said.

Elser, a musician, said the visit to the The Metropolitan Cathedral of the Assumption of the Most Blessed Virgin Mary into Heaven on June 28 was a great pleasure as he saw and heard the two large, ornate pipe organs that dominate its nave.

It was “a very powerful and prayerful experience for me,” he added.

Some members of the group also got to meet Mexico City Cardinal Norberto Rivera Carrera, who was installing new acolytes in the cathedral.

“It was just great to really see the faith of so many people here in Mexico City, people coming from all across Mexico, the world,” Elser said. “It was a very powerful experience.”

For de Orbegozo, inspiration came in an unexpected form: rain.

“It started to downpour, and we eventually made it to a church and we all stuck together,” he said. “It was an experience that made me think of the various pilgrims that do go to Guadalupe and the faithfulness that they have in traveling three, four, five, six months to the shrine and the humility that they need to ask for help from others, to really entrust themselves to God and also entrust themselves to the kindness of others. In that moment I experienced a small fraction of that. And for that I am grateful.”