Father Barnabas has place to call home in Arkansas

Native of India is 'pastoral by nature,' serving Catholic faithful in Bella Vista 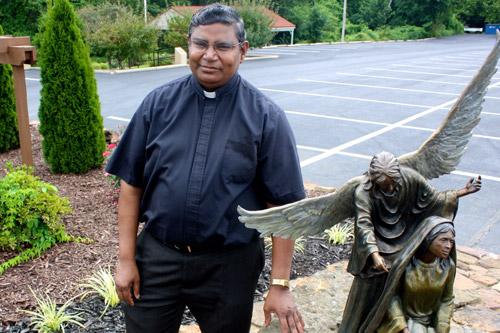 Alesia Schaefer
Father Barnabas Maria Susai, IMS, pastor for the past five years in Bella Vista at St. Bernard of Clairvaux Parish, has served in the Diocese of Little Rock since 2006 and is celebrating his 25th anniversary as a priest.

Alesia Schaefer
Father Barnabas Maria Susai, IMS, pastor for the past five years in Bella Vista at St. Bernard of Clairvaux Parish, has served in the Diocese of Little Rock since 2006 and is celebrating his 25th anniversary as a priest.

BELLA VISTA — In a city nestled in the foothills of the Ozark Mountains, known for its retirement community, lives a man far from retiring.

Father Barnabas Maria Susai, a member of the Indian Mission Society religious order, serves in Bella Vista, a scenic city surrounded by seven lakes and seven golf courses. Yet, the irony of the situation is not lost on his parishioners.

Father Barnabas, as he is known, spends his time, not in recreation, but ministering to the people he was called to serve 25 years ago.

“He is very pastoral by nature,” said Phillip Fredrich, parish manager of St. Bernard of Clairvaux Church, the only parish in Bella Vista. Fredrich, who has worked with him for the past five years, said Father Susai rarely takes time for himself.

“His modus operandi is really to bring people to Christ,” Fredrich said. “This community has felt very blessed to have him.”

In September, Father Susai’s parish community will celebrate the priest’s 25th anniversary as a priest. That call to the vocational life began back in his home country of India when he was in the eighth grade attending a Catholic retreat.

“At the retreat, they discussed what it would be like to be missionaries and priests,” recalled Father Susai. “My brother, Vimal, joined the seminary about that time and he was a source of inspiration and information and a good example to me.”

Born Nov. 3, 1959, in Salem, a city in southern India known widely for its mangoes, Father Susai grew up the son of farmers with six siblings. Following high school in 1977, Father Susai joined the seminary of the IMS and worked for six years as both associate pastor and pastor in a parish with two mission churches. He was also responsible for beginning another mission church in the area.

After his time there, Father Susai moved to Fathepur in northern India for nine years where he continued his missionary work and helped establish a first-through-12th grade school and form another mission church.

“The interesting aspect of IMS is that the charism is pioneering evangelization,” Father Susai said.

A charism he soon learned to embrace when his superior general and provincial came for a visit and gave him the surprising news that he was being sent to Arkansas. He became the second priest of the IMS to be located in the diocese; the other being Father Josely Kalathil, who currently serves in Scranton.

“I was thinking ‘Where in the world is Arkansas?’” Father Susai said.

He found out in November 2006, when he arrived in Barling and stayed there for three months before receiving an appointment to Scranton, Morrison Bluff and Prairie View parishes. Four years later, in June 2010, he was transferred to Bella Vista.

Since then, his quiet demeanor and mission of compassion have endeared him to the parishioners.

“Father Barnabas is responsible for bringing my husband and myself back to the Church,” said Christina Laughlin, who was born Catholic but had fallen away. Laughlin, who has served as the parish administrative assistant for the past 10 months, credits Father Susai with her homecoming.

“When he spoke with us, we felt called to be here and this really feels like home to us now,” she said.

As a missionary Father Susai said his heart still beats for the poor and those needing to hear the Good News.

“Everywhere I can look back where the Lord was guiding me and every place there has been something special for me to learn and to cherish and to be thankful to God,” Father Susai said. “As I work here or back home in my region, where I served for 23 years, I want to serve my religious order and help the Ranchi region, a very poor and neglected area of the country.”

“Whatever the Lord brings,” he added, “I will do.”

A 25 year jubilee celebration and dinner are planned for Father Susai Thursday, Sept. 24 following Mass. Three parishioners who accompanied him to his home province in January will give a presentation about their visit.