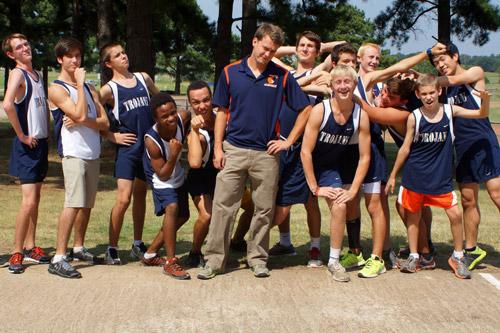 Courtesy Subiaco Academy
Coach Jeff Rehm clowns with his team during the 2013 cross country season. In just two years, the Subiaco Academy grad has molded his alma mater’s runners into a force to be reckoned with.

Courtesy Subiaco Academy
Coach Jeff Rehm clowns with his team during the 2013 cross country season. In just two years, the Subiaco Academy grad has molded his alma mater’s runners into a force to be reckoned with.

Of all the sports Subiaco Academy sponsors, few look more at place than Trojan runners.

Fitting neatly as it does in the hilly countryside and miles upon miles of straight farm roads, the sport also embodies the ethos of the school’s Benedictine fathers: Get up, say a prayer, work hard and find joy in the effort before doing it all over again tomorrow.

“The community here is very supportive,” said third-year head track and cross country coach Jeff Rehm. “The headmaster (Matt Stengel, class of 1999) ran cross country when he was here, so he loves to see the boys running. The monks come to me and say, ‘Hey we saw your boys working hard,’ and what a great job they’re doing.

“To have dropped in and taken this up and have these kinds of kids who want to run every day has just been a blessing. I feel like the basketball coach at Kentucky who can just roll the ball out and win games.”

“Basketball or football, for most people, is over in high school. Running is something you can continue into your 70s and 80s.” Jeff Rehm, Subiaco Academy track and cross country coach

From 2001 to 2005, these same roads were Coach Rehm’s training fields as a member of the Subiaco Academy cross country and track teams. He won districts in cross country his senior year and twice won the district 800 meter in track.

After graduation, he attended University of Central Arkansas studying psychology and earning a master’s degree in education before sprinting straight back to the academy for his first job. It was as if stepping back in time.

“Coach (Robert) Pugh was the track coach when I was a student and he remained so when I took over the track team,” Rehm said. “We still shared athletes with all the other sports:  When I was a student, we didn’t necessarily take a full busload of kids and we still don’t. It can be a crunch with numbers and that hasn’t changed much.”

What did change the day Rehm took over with the 2013-2014 season was a commitment to strategic thinking and formalized training programs for all runners, especially in cross country.

In fact, one of the things that nudged Rehm into the coaching role was learning that because of this lack of a formal system, the cross country program had dried up entirely and with it, the inherent lessons that come with the sport.

The team achieved modest success its first year, then exploded last year. The senior team placed first or second in four invitational meets, then won the 4-4A Conference Championships on the strength of five runners in the top 15, including conference individual champ Nick Charbonnet. The team also placed sixth at state and sent five runners to the inaugural River Valley All-Star Meet.

Along the way, the rag-tag crew turned world-beaters gained a strong following among their fellow students who appreciated the grit and determination of team members, some as young as seventh grade.

“They’ve really supported the younger kids,” Rehm said. “Timmy Constantino, who’s 5-foot-nothing, 90 pounds dripping wet, is probably not going to be the star of our football team. But the student body really got behind him because they saw him working every day, running 30 miles a week, a 12-year-old competing with ninth graders in the mile in track.”

Constantino, now a freshman, inspired his teammates as well, including junior Brayden Rainwater, one of this year’s team captains. Rainwater and Constantino were pals at St. Joseph School in nearby Paris before coming to the academy where Constantino got bit by the running bug first.

“I wasn’t really doing much after school and I felt like I needed to do something,” Rainwater remembers. “The first practice I thought this isn’t right for me, but I did better in it than I did in, really, anything else and I enjoyed it a lot more because I had some of my friends on the team too.”

After two seasons and hundreds of training miles, Rainwater is now one to watch in the conference and is so taken over by running he’d like to compete at the college level. But in the same way he tackles a race — compartmentalizing and focusing on one challenge at a time — he’s got his sights on what’s most immediately at hand, justifying his coach’s confidence in him as team captain.

“Oh, it means the world to me,” he said. “I’ve always thought that I could help my team more than what I was doing. I always try to be helpful, but I think I can do more as a team captain so I was really hoping for this. I hope I will do a good job in this position and help out the new guys.”