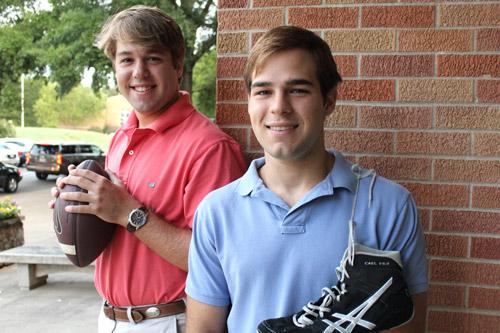 On the face of it, there’s not a lot of things upon which twin brothers James and Matthew Rose appear to disagree.

Both agree attending Catholic High School in Little Rock after attending public elementary and middle school was a great decision. Both seniors have their eye on attending the University of Arkansas and neither knows precisely what he will study once he gets there. They also concur that the lessons they have learned both in the classroom and in athletics will serve them well no matter what they go into in life.

The 18-year-olds also have similar tastes in movies and music although honestly, the latter is often dictated by who’s driving the car. But talk to them separately and differences begin to emerge.

James fell in love with his sport — football — early on in life and the dedication and focus he’s applied to his chosen activity shows. A two-year letterman on the offensive line, he’s the incumbent center for the Rockets this season. James also fields questions more easily, comfortably firing back answers and insights framed in his distinctive vocal twang.

Matthew thinks more than he speaks, at least when being peppered by Arkansas Catholic about wrestling, which he discovered only last year. Soft spoken, he tells his story in terms simple and direct as one who stumbled into what he was meant to do with little need to ask why.

“Some people, a wrestler, told me to come out and I did,” he said. “I guess I was kind of a natural at it. After a couple of practices I started getting the hang of it and it all came together.”

Even though it took him down his own path, Matthew’s decision to come out for the wrestling team was welcomed by his football-only brother.

“We went to a wrestling match freshman year and Matthew’s body just fit being a wrestler,” James said. “Me and my dad both were telling him how he should wrestle and he was always like, ‘Naw, I’m never going to do that.’ But then last year he ended up wrestling and I was all for it because he actually was good at it. He got it. All the coaches said he just understood it naturally. I’m happy for him.”

Understanding the mechanics of the sport only took Matthew so far his first year. While his brother has started on the freshman football team and is a two-year varsity starter (an injury cost him his sophomore season), Matthew’s first year in competition was so bad he doesn’t even recall his win-loss record. It wasn’t hard to understand why.

Fortunately, what the brothers do share is an intense work ethic and competitiveness. Once bitten by the wrestling bug, Matthew trained obsessively over the summer. He swore off bad eating habits and hit the road and weight room — hard — to get to down to 145 pounds, his current fighting weight.

“I ate really, really clean and healthy foods,” he said. “I mean, I cut all the junk food and all sodas. I weightlifted two hours a day, five days a week and do a 3- to 5-mile run three days a week.”

James has faced his own physical dilemma. He didn’t come tailor-made at his position — at 6 feet 220 pounds, he’s small for an offensive lineman. That’s meant developing athletic tools to counter the brute size and strength that’s routinely staring across the line at him every game.

“I’m a little lighter than most linemen, I’m probably the lightest in 7A, but I’m a lot more athletic than most linemen, too,” he said. “They moved me around this spring; I played linebacker and different things, but I came back to offensive line because I knew how to do it. My strength is probably my speed and my footwork and my pass blocking.”

One would think with the strength, quickness and explosiveness that both wrestling and football demand that the brothers would find common ground in the weight room, but they don’t train together. That doesn’t mean there isn’t mutual support, at least, as supportive as male teenage siblings get toward one another.

“I made sure he was on track,” James said. “If he ever picked up anything in front of me where he was eating something he shouldn’t have, I would get on to him in kind of a mean way. I never trained with him because he was doing something different from what I was doing, but I would always check up on him.”

“We always talk about each other’s sports, make sure we just kind of keep pushing each other in a way, I guess. Just to see who can do better,” Matthew said.