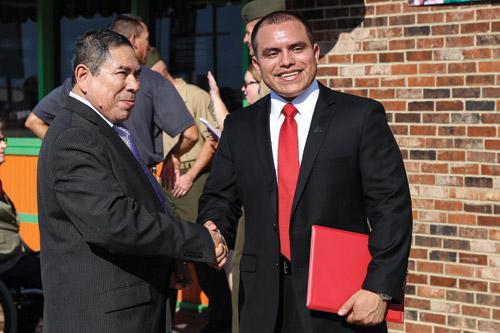 Deacon Domingo Lopez (left) shakes his son Robert’s hand after Robert received the Bronze Star during a Sept. 29 ceremony at Las Americas Too in Fort Smith, the Lopez family’s restaurant.

Deacon Domingo Lopez (left) shakes his son Robert’s hand after Robert received the Bronze Star during a Sept. 29 ceremony at Las Americas Too in Fort Smith, the Lopez family’s restaurant.

FORT SMITH — As Deacon Domingo and Mercedes Lopez pinned the Bronze Star with Valor on their son Robert Sept. 29, they were filled with pride and gratitude.

“This is an honor for me, but my two children are the greatest gift,” Mercedes Lopez said. “I always prayed to God for good children and see this honor coming from him. I tried to raise Robert and Patricia right and always told them to put God first in everything they do.”

After his mother pinned the medal on, Lopez then turned and handed his medal to his father.

“He is one of the most humble men I know,” he said. “Both my parents were always there for me.”

Robert Lopez, 27, a former Marine sergeant, received the U.S. military’s fourth highest honor during a ceremony at his family’s restaurant in Fort Smith.

In two seven-month deployments — Iraq in 2008-2009 and Afghanistan in 2010 — Robert Lopez remembered his mother’s words that gave him the courage to act unselfishly and fearlessly in combat.

“I was born in the United States but moved back and forth between El Salvador and the U.S. until I was 9,” he said. “We prayed the rosary every night, and I was an altar boy as a little kid. When I went into the military my mother gave me a St. Michael the Archangel holy card that I carried with me. If it wasn’t for all the prayers she prayed, I should have died a couple of times.”

The greatest challenge for Lopez, a member of St. Michael Church in Van Buren, came when he was placed in charge of several teams after his sergeant was injured. On Aug. 22-23, 2010, while trying to secure a compound in the riverfront town of Sangin, Afghanistan, he and his men were peppered with shrapnel from a makeshift grenade, but he was able to lead them to safety. On the following day, they discovered a cache of weapons and explosives in another compound and came under heavy fire. Lopez climbed a wall and sprinted under direct fire, acting as a spotter and directing his men where to shoot until the fire was silenced.

“I always told my men that they would go home alive before I would,” he said, explaining what gave him the courage to climb the wall.

When his active duty was completed in 2011, Lopez began to study accounting at the University of Arkansas Fort Smith. Initially he found the transition from military to campus life difficult.

“College is very different from the Marines,” he said. “I was used to dealing with combat operations and men in stressful situations. I was a non-traditional student and had no one to relate to. People thought I was too assertive when I was just confident.”

For the past year, he has been an intern at ARCBest Corporation, a national transportation and logistics company headquartered in Fort Smith.

“ARCBest helped me a lot,” he said. “I started out in customer service and discovered how to treat customers in the civilian world.”

He had several professional mentors from local corporations in various stages of their careers.

Lopez will graduate with a bachelor’s degree in accounting and auditing in December and begin working for Ernst and Young in McLean, Va., in January.

“I would like to be a mentor in a few years,” he said. “I’ve received so much from my country, my university and ARCBest, and I want to give back.”

While Lopez was in college, his father and mother were dealing with their own educational challenges, attending the diaconate program once a month at St. John Center in Little Rock.

“Many of the other men preparing to be deacons had much more education than we did,” Mercedes Lopez said. “Neither of us had finished high school in El Salvador. When we felt like giving up, we prayed and helped one another.”

When not in classes, the Lopez family ran their business, Las Americas Too, a busy Salvadoran restaurant. Ordained in 2012, Deacon Domingo Lopez is also giving back at St. Michael Church in Van Buren, officiating at baptisms and weddings, teaching classes, serving at Mass and giving homilies.

“I admire the commitment my parents made,” Robert Lopez said. “I love having a deacon in my own family. I can ask him anything about religion and life, and he always gives me great answers.”