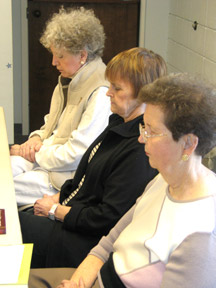 "In praying, do not babble like the pagans, who think that they will be heard because of their many words. Do not be like them. Your Father knows what you need before you ask him." (Matthew 6:7-8)

Finding God in the silence. That is often hard to do given the noise pollution that infects the modern world. Television accosts the senses. Satellite radio and the Internet travel even to the most remote getaways. Even Mass is not immune to cell phones and pagers.

Distraction seems to be a clever enemy to prayer.

In response, many have rediscovered the ancient Christian practice of contemplative prayer. A centuries-old monastic tradition, this prayer form is expressed without words, thoughts or emotion. It is simply a silent resting in God's presence.

Drawing from the writings of the Church's contemplative heritage, three Trappist monks from St. Joseph Abbey in Massachusetts developed a modern method called centering prayer in the 1970s.

According to "The Method of Centering Prayer," a brochure by Father Thomas Keating, OCSO, contemplative prayer in the Christian tradition "is considered to be the pure gift of God." Centering prayer is simply a practice that could bring about contemplative prayer "by preparing our facilities to receive this gift."

Centering prayer is based on the words of Jesus during the Sermon on the Mount: "But when you pray, go to your inner room, close the door, and pray to your Father in secret. And your Father who sees in secret will repay you." (Matthew 6:6)

At Christ the King Church in Little Rock, participants in the Adult Faith Formation program recently practiced centering prayer as part of a seven-week prayer series led by Sandy Compas, associate director of religious education for the Diocese of Little Rock.

Before leading the class into the experience Feb. 8, Compas instructed them on the process.

To start, choose a comfortable prayer posture and focus on the rhythm of one's breathing. "Try to breathe very deeply and very slowly." Then to focus on God "you choose a word or a phrase to repeat in your mind."

When choosing a word or a phrase, the point is to pick something short to prevent being distracted by the word when concentrating on saying it, she said.

"Pray that very slowly over and over again with your breathing."

"When you find yourself getting distracted while praying, the thing to do is just bring yourself back to that word or phrase very gently, very slowly," she said.

After 20 minutes of prayer, Compas received mixed feedback from the participants.

One said 15 minutes was good while another said 20 minutes wasn't long enough.

A third complained of being "fidgety" and found it hard to focus, while a fourth said it was relaxing. A fifth participant said 20 minutes was fine, but the first five minutes was the hardest.

He said he eventually got to a point where he didn't hear the music and lost awareness of how his hands were positioned.

"Getting lost is exactly what we're trying to do, getting beyond words and images and even conscience thought, just to be in the presence of God," Compas said.

Abbot Jerome Kodell, OSB, of Subiaco Abbey said he been practicing centering prayer since 1980 and considers it to be "it a very powerful prayer."

Through the books of Father Keating and the late Abbot M. Basil Pennington, OCSO, and Father John Main, OSB, he said he taught himself the form of prayer.

"I have found for me, it is the best type of prayer," he said. "Any time you do this kind of prayer it takes the emphasis off yourself and puts the emphasis on God because it doesn't depend on any of your own thoughts."

Abbot Jerome said Father Main founded Christian Meditation, another prayer method that is similar to centering prayer in that its purpose is the same -- to guide one into contemplative prayer.

Centering prayer uses a prayer word or "mantra" that one stops using once focused on God, but with the Christian meditation method, the word or phrase is repeated all the way through the prayer.

Traditionally in the West, meditation usually means a mental reflection of ideas, he said. But for this purpose, the word, "meditation" draws from the Eastern tradition to mean contemplation.

Abbot Jerome said other methods that may lead to contemplative prayer include the rosary; the Lectio Divina, which is a contemplative meditation on a scriptural verse or word; the Jesus Prayer, which can be used on its own as a mantra; and adoration of the Blessed Sacrament.

"God can lead anyone into this without going through these methods, but these are methods over the years that have been found to help people looking for guidance," he said.

Ultimately "the more we practice the more we get into a life of prayer, the less words are needed," he said. "The simple focus on God is beyond your knowledge. ... It's a great act of humanity. You trust God to heal you but you can't make any demands because you don't even know what you need."

Anne Thomisee, director of religious education at Our Lady of the Holy Souls Church in Little Rock, facilitates a centering prayer group on Wednesday mornings. The group, which has been meeting for three years, begins with fellowship, followed by a Scripture reading, then 20 minutes of centering prayer and ends by reading and discussing a book on prayer.

Thomisee said centering prayer is hard to do because it is so contrary to most people's active lifestyles.

"There's no doubt about it," she said. "It is not an easy form of prayer especially for people like ourselves in this country who are so used to the take charge, always being busy, always talking, always thinking, always on the go. Centering prayer is exactly the opposite of that. It invites us ... to give up control."

Because it so "counter-cultural" she recommended following the steps because it helps one develop a discipline for silence.

"When you first start your mind is just cluttered with thoughts," she said. That is where the prayer word or phrase is an ally against distraction.

"The word in itself is not all that important because what it does is help you get into this prayer," she said. "And whenever you have a thought that comes creeping in you go back to your sacred word."

Though hard to find the time, it is worth it because the fruits of the prayer are experienced in every day life, Thomisee said.

"A contemplative person is aware of God's presence all the time," she said, "and sees God in everything that happens without necessarily thinking about it."

To practice centering prayer one does not need to be part of a group. Anyone without instruction can do the method. Many may be practicing a form of centering prayer and not even realize it, Thomisee said.

Annette Wahlgreen, 75, a Holy Souls centering-prayer group participant, said in three years this prayer method has taught her to allow God to work through prayer distractions.

"Centering prayer acknowledges that there are distractions and we simply have to let them pass. ... In the past I tried to argue with them ... Now I allow the Spirit and peace to overcome my distractions," she said.

In the season of Lent, Wahlgreen said centering prayer can also be helpful in heightening self-awareness and redirecting one's focus.

"Our faults like selfishness and our pride, our determination to satisfy ourselves rather than to be open to God, centering prayer helps us first of all to see these things in ourselves and secondly to let them go," she said. "I like to think of it frankly as like housecleaning, clearing out so that God can move in."

"If people can commit 20 minutes twice a day to centering prayer, that's a real discipline," Compas said. "I'm not one of those believers that you should always give up something for Lent, sometimes I think it's helpful to add something, some new kind of discipline or some new kind of prayer and make a commitment to that."

Centering prayer is inspired by the writings of John Cassian, the anonymous author of "The Cloud of Unknowing," Francis de Sales, Teresa of Avila, John of the Cross, Therese of Lisieux and Thomas Merton.