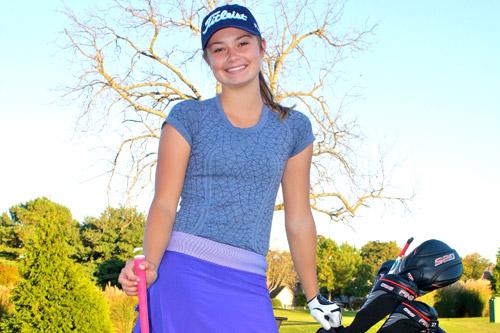 Alesia Schaefer
Brooke Matthews, Class 7A girls golf state champion, works on her game at the driving range at the Pinnacle Country Club in Rogers. Matthews, a junior at Rogers High School, began playing golf at age 12, captured the state title two years in a row and has signed with the University of Arkansas.

Alesia Schaefer
Brooke Matthews, Class 7A girls golf state champion, works on her game at the driving range at the Pinnacle Country Club in Rogers. Matthews, a junior at Rogers High School, began playing golf at age 12, captured the state title two years in a row and has signed with the University of Arkansas.

ROGERS — Like many high school students, Brooke Matthews considers hanging out with her friends a top priority. But unlike most juniors in high school just beginning their college search, Matthews has made up her mind.

In early August, after a summer of tournaments, Matthews verbally committed to play golf at the University of Arkansas beginning the fall 2017. But for now, the more pressing matter, said Matthews, is to just keep playing solid golf.

Defending her title in September at the Conway Country Club during the golf state tourney, Matthews, 17, became the Class 7A girls’ golf state champion. On Thursday, Oct. 15, she also played in the Arkansas Overall State Tournament at the Pleasant Valley Country Club in Little Rock and came in second place.

Matthews began turning heads not long after she began the game at age 12 and has attracted more attention with each passing year. As a freshman she came in third in the 7A girls golf state tournament. For the past two years she has been the overall 7A winner and she still has her senior year to claim the title again.

Both on and off the golf course, Matthews is driven. On the course, she likes the hard-hitting driving and feels that’s the best part of her game. Off the course, she has approached life the same way.

Parents, Terry and Gwen Matthews, and sister, Brittany, have supported Matthews every step of the way.

“Her dad is the sounding board and the one that knows her game inside and out. He plays regularly with her,” mom Gwen said. “Her sister and I provide moral support and balance and try to keep things light for her.”

“Brooke has always had a tremendous drive for whatever sport she is participating in,” Gwen said. “We never have to tell her to go and practice. She wants to be the best at whatever she is doing. She has always had that drive to succeed.”

Matthews’ mother noticed that tenacity as young as 5 years old when gymnastics was Matthew’s sport.

“She would not miss practice, spending 20 or more hours in the gym and she begged for more gym time,” Gwen recalled.

At age 10, she was one of the state’s youngest Level 8 gymnasts and was state champion in several events. But, when practice seemed to be overshadowing school, Matthews wanted to be home schooled. Then a student at St. Vincent de Paul School in Rogers, her parents refused and Matthews decided to quit gymnastics.

“We were shocked, but it was also an answer to my prayers,” her mother said. “I constantly prayed that she would quit before she got hurt or burned out.”

After a short stint in competitive softball and at her parents urging, she picked up a golf club and has seemingly found her sweet spot.

“I had always wanted to play college sports, but I decided I wanted it to be golf when I was about 14,” the Rogers High School student said. “My gymnastics career had just ended and I realized that golf was my more natural talent.”

For the long game, golf has also set up some life lessons, according to Matthews, who attends Life Teen as a parishioner at St. Vincent de Paul Church.

“It really makes me feel like I have something to go back to in the good times and the bad,” she said. “Golf has helped me to be patient and realize that everything happens because it is God’s plan. I’ve made a lot of golf friends, learned integrity on and off of the golf course and have learned to deal with a lot of different types of people, which is a very valuable skill to have.”

“I have been fortunate to work with a lot of wonderful golfers and one thing I see in Brooke that stands out is her competitive nature,” Alexander said.

“I have always been a huge Razorback fan and as soon as I decided I wanted to play in college I knew I wanted to go there,” Matthews said of her decision in August.

Her swing coach, Phillip Walker at Back Nine Academy, who attended and played golf at the University of Arkansas, also helped influence her decision.

“After I took my first visit I knew it was for me. They have a really good team.”

“When I’m older I would like to play in the LPGA if that is the road I choose to go down,” Matthews said of her future.

“I look forward to seeing her play and enjoy her college golf,” Alexander said. “I think that will help her to understand if professional golf is something she wants to pursue. I think Brooke has the potential, but the professional game is a lot more challenging than most of us understand.”

“Athletics has helped define who she is today, especially golf,” Gwen said. “Golf brings out her work ethic. Brooke is looking forward to what golf will help her achieve in life.”