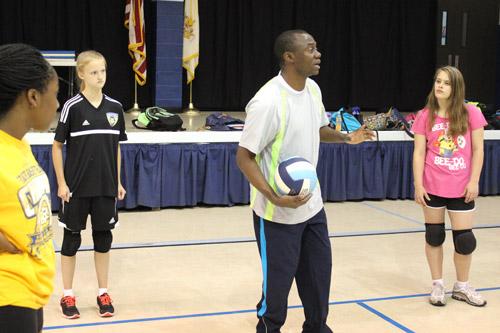 North Little Rock Catholic Academy isn’t the largest school in the diocese, hardly so, but you can’t escape the degree of diversity that exists in the halls, classroom, even on the volleyball court. Here, a blue-eyed blonde bumps to an olive-skinned, raven-haired setter who positions the brown-eyed, mocha-complected spiker for the kill.

In the eye of this swirling hurricane of color and culture stands a lean, 30-something African demonstrating technique, barking orders and clapping his encouragement through each drill.

As diverse as NLRCA is, it’s a pretty safe bet that none of the dozen seventh- and eighth-grade volleyball players dressed out today have ever met anyone else from the Congo, much less been there. No matter; their coach has only been ordained for three years, been in Arkansas about 18 months and in his current assignment since February. Needless to say, he’s had some adjusting of his own to do and coaching the fifth-, sixth-, seventh- and eighth-grade volleyball teams presented the opportunity to connect.

“One day I came to watch and I just touched the ball and the people liked it and they asked me to help them,” he said. “I say, ‘Oh, of course, I like it.’”

The school may be small, but Father Ngandu’s workload is anything but. In addition to putting in time at the academy, he’s administrator for two parishes in North Little Rock — St. Patrick and St. Mary — and is one of the chaplains at St. Vincent Infirmary in Little Rock.

One might think with such a full plate, the last thing he would want would be an additional commitment chasing errant serves. As it is, he doesn’t make every single practice or game, but it’s clear the activity invigorates him with each athlete he encounters.

“I came from a large school in Africa. Even in the church, even in the school, many people, you can imagine,” he said. “This experience I am doing, it is good to be in the small group and small school. We know each other. This is a good experience for me.”

Volleyball and soccer were Father Ngandu’s sports of choice growing up and he played both through the American equivalent of high school. The two activities even cross during his coaching today — if someone tosses him a ball he’s not expecting, he instinctively chests it to the ground and traps it there in one smooth stroke.

But he’s quick to admit the soccer train passes one by more quickly, which is why by the time he entered the seminary, volleyball was his primary means of exercise as well as fellowship.

“I started to play volleyball since I was a little boy,” he said. “I used to be good.”

Father Ngandu’s talent and love for the sport notwithstanding, coaching is new to him, which makes each practice alternatingly exciting and flabbergasting. Little separates him from the hundreds of other first-timers who volunteer to lead activities in Catholic schools across the diocese every year as he watches college matches to gain pointers and formations, rewards good effort with a high five and broad smile and greets mental errors with less-pastoral reactions.

Taking in a practice, it’s quickly apparent his players regard him differently than the typical volunteer, however, and not just because of the stray preschoolers standing on the sidelines during practice demanding a hug. None of the players call him coach and his critiques, however emphatic, never seem to sting, either. To a person, they say his efforts have made them better players.

“It was different,” said seventh-grader Mallory McGinness of the first practice under Father Ngandu. “We worked on a lot of different things — more spiking — and we learned more skills. It was good. He’s really encouraging.”

“Father’s good at volleyball,” said Frida Malo, a seventh-grader. “He focuses on being smart about what you’re going to do. He says that a lot.”

While Father Ngandu clearly relishes the opportunity for people to experience him apart from his collar now and again, he also never strays too far from his vocation. A good pastor can find many ways to connect with the faithful, after all, even via junior high volleyball when necessary.

“There is a connection between our faith and spirituality and sport,” he said. “Everybody plays volleyball or soccer or football the same. We want to make it like spirituality, you know? We do it in a spiritual way. Before we play we pray and the kids understand that we are different from other players. For us, we play it with our faith. This is the way, also, for me to do my pastoral way.”