Gov. Hutchinson says he does not want Syrians entering state after Paris attacks 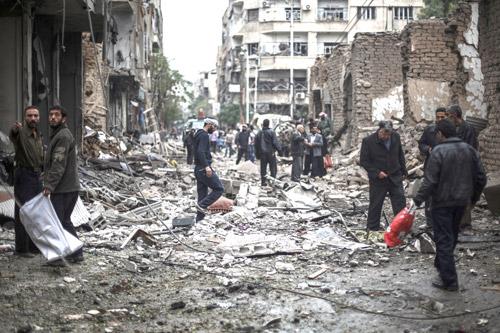 CNS / Mohammed Badra, EPA
Syrians look at a destroyed field hospital in the rebel-held area of Douma on the outskirts of Damascus, Oct. 29.

CNS / Mohammed Badra, EPA
Syrians look at a destroyed field hospital in the rebel-held area of Douma on the outskirts of Damascus, Oct. 29.

Arkansas Gov. Asa Hutchinson and governors from at least 20 other states said they will no longer accept refugees from Syria.

Questions about U.S. practices in the resettlement of refugees were renewed in the wake of the Nov. 13 attacks by extremists on popular venues in Paris. French authorities said coordinated attacks left at least 129 people dead and more than 350 wounded. Police raids in France and Belgium have led to the detention of several suspected extremists.

“Since the mid-1970s, the Diocese of Little Rock, through Catholic Charities of Arkansas, has helped to resettle refugees.  Currently, refugees approved by the U.S. Department of State can be referred to Arkansas for resettlement. “If the refugees are assigned to Catholic Charities, they are welcomed upon arrival and assisted with the resettlement process, which includes help with learning English, obtaining housing, finding a job and learning about American culture.

“Normally, people seek refugee status by applying to the U.N. High Commissioner for Refugees (UNHCR). If approved, the case is forwarded to a receiving country, such as the United States. At that point, the United States vets the applicant for security purposes, a process that takes up to a year. Only then is the refugee accepted for resettlement in the United States.”

Archbishop Joseph E. Kurtz of Louisville, Ky., president of the U.S. Conference of Catholic Bishops, told reporters Nov. 16 during a midday break at the bishops’ annual fall general assembly that Church resettlement programs in the United States will continue to aid refugees who are fleeing violence and social ills despite calls that the country’s borders should be closed to anyone but Christians.

The Church’s response is focused on people in need of food, shelter and safety and not their particular faith.

“We at the United States Conference of Catholic Bishops and Catholic Charities, we are always open to helping families who come into the United States in need of help,” he said at a news conference. “We have that tradition of doing it and we’re going to contribute.”

Archbishop Kurtz explained that any assistance provided to refugees and immigrants is carried out under government contracts and that the vetting of newcomers will have been completed by government agencies long before Church agencies become involved.

“Our efforts are going to be to reach out to people and to serve them,” the archbishop said.

“My hope would be that the Church would continue to be able, within the law, to help those families.”

The archbishop said he and other USCCB representatives met with President Barack Obama at the White House Nov. 13 to discuss immigration. Archbishop Kurtz was guarded in his comments about details of the Obama meeting, saying it was initiated by the White House and that he did not want to violate the president’s request for privacy about it.

The archbishop also said that he planned to meet with House and Senate leaders Nov. 19.

“One of the areas we’ll be looking at is bipartisan efforts to reach out in a manner that takes into account the safety of the families and our capacity to reach out to people of all faiths,” Archbishop Kurtz said.