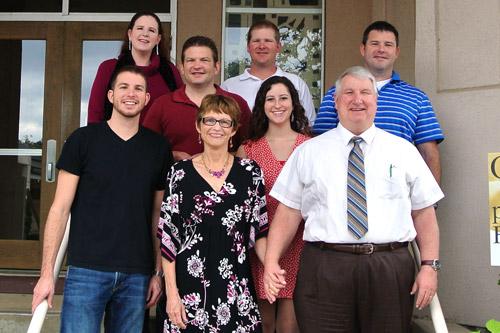 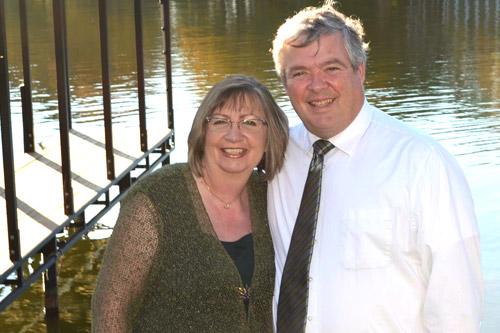 Parishioners share stories of loss, how grief ministry has helped in their journey 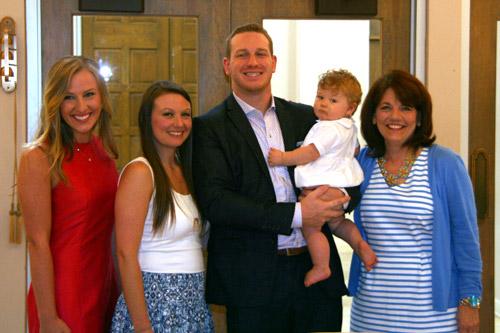 “Challenging the Landscape of Loss” by Father Terence Curley

“No one told me that grief felt so much like fear.”
“A Grief Observed,” C. S. Lewis

In recounting the experience of losing her husband to cancer in 2013, Vicki Kaplon referred to this quote by C.S. Lewis.

“I had cared for my husband for two years and that last year was very difficult. After his death, I was then trying to figure out what to do, where to go. What am I going to do with my life?” she said.

Kaplon and her husband, Ron, had strong ties to North Little Rock. They met at St. Patrick Church and were one week shy of being married 32 years when he died.

“He was an electrical engineer and manager of the radar at the Federal Aviation Administration. He had a good job and loved it. He was a good man,” she said of her husband.

Now their son John is married, living in Little Rock and the father of a toddler, and their daughter Kristen is studying to become a physician’s assistant at Christian Brothers University in Memphis.

“When Kristen was graduating in May 2013 at the University of Arkansas at Fayetteville, it was important to my husband to attend that graduation,” Kaplon said. “He worked really hard to be able to go. By then he was in a wheelchair. I drove up there and we went out to eat that evening after graduation. We stayed in a hotel. He just did so good, but the next day he was very tired. And a month later, he died when they discovered another sign of cancer that had metastasized.

“After his death, people couldn’t believe that he had died. I had posted graduation pictures on Facebook about my daughter’s graduation. But in that last month, I just didn’t talk to a lot of people. And it was really in the last week of his illness that things got so bad and they told us that he was dying. People said they just couldn’t believe it. I knew it, but I didn’t want to admit it.”

In November 2013 Kaplon was approached by Deacon Butch King and then pastor Father Tom Elliott to train to be a team volunteer for Compassionate Companions, a new grief support program in her parish, Immaculate Conception Church.

“I had the feeling of the Holy Spirit giving me a push in that direction. There were times when I didn’t think I could do this. But the training period was like a grief ministry for me with all of us discussing our experiences in grief and loss through the years,” she said.

Now being a volunteer has given her focus.

“To be in this grief support group has allowed me to take a difficult situation that can somehow bring good out of it and make my loss more bearable,” Kaplon said.

“There is a sort of invisible blanket between the world and me.”
“A Grief Observed,” C. S. Lewis

When Don and Claudia Guillory talked about their journey of grief following the death of their 36-year-old son, Timothy, in 2013, she spoke of the need to be a part of the new grief ministry at Christ the King Church in Little Rock.

“I wanted a connection with other people,” she said. “I needed to be with other people who were experiencing grief also. It helped me to not feel alone. The fact that it was starting up in my own parish made it more inviting.”

“It was less than two months after Timothy died that we started in this group,” Don said,

One of six children, Timothy died in his sleep of a brain aneurysm Aug. 19, 2013, in Lafayette, La., where he worked as an oil and gas consultant. A former Marine, he graduated from the University of Louisiana Lafayette in 2004 with a business degree. Afterward Timothy worked for a time as a counselor for troubled boys at Our Lord’s Ranch in Wyoming before returning to Lafayette.

Claudia pointed out the importance of seeking support for their grief as a couple.

“We could share our grief together rather than Don handling his own and me handling it on my own. It brought us together. It is important for a couple to stay united after the death of a child. So it’s helpful for both of us to hear the same message. I think it helped bring us closer together,” she said.

Don agreed. “Claudia and I are good together. We accept each other pretty much as we are. It worked for us. Losing Timothy did not drive us apart. But I didn’t expect it to,” he said.

For Claudia, Tim’s death brought home even more deeply how brief life is.

“I look back on his life and I feel he served God well in dealing with day-to-day activities,” she said. “He was available to people at work.; he brought joy to people’s lives. I’m trying to find comfort in that by living today the best I can. My goal is to just live for today in service to God.”

And for Don, “Now our future has to do with the family that is still here. Our other five children. Timothy ran the good race so my concerns are with the people that are here and still working their way through the race.”

“Her absence is like the sky spread over everything.”
“A Grief Observed,” C. S. Lewis

When Valerie Sweeden was traveling in December 2014, she was notified of the death of her mother, Doris Medway of Sherwood.

“I had a tremendous guilt that I was not here when my mother needed me most for her final breath,” she said.

Mother and daughter were very close, especially in their faith.

Even though her mother was 94 at the time, Sweeden said, “ I experienced so many emotions this past year. I had been in a music ministry for 38 years with my husband, and with my grief, the joy of ministering in this way was no longer there. I needed to be ministered to instead of ministering to others.

“My husband and I resigned our music ministry in February 2015 in order to be healed. Then in the course of a few months, we received an invitation to attend the grief support ministry, Compassionate Companions at Immaculate Conception Church in North Little Rock.”

The first anniversary of her mother’s death occurs on Dec.11, and although the holidays are coming, Sweeden said, “I know it will be tough but after attending the sessions of the grief support ministry this past fall, I know it is OK to grieve and to heal.”

“Challenging the Landscape of Loss” by Father Terence Curley