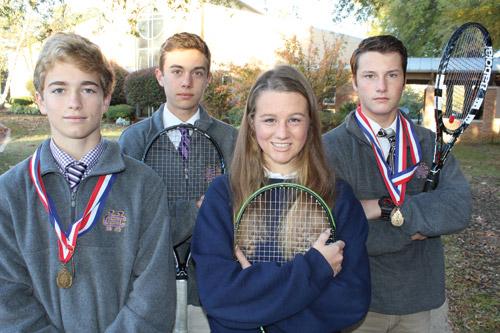 Parker Stearns, as he delights in reminding people, saw it all along.

Knowing what we know now, Stearns’ precociousness wasn’t too far out on a limb. In fact, given the dominance Catholic High and Mount St. Mary Academy tennis teams showed this season, predicting a 7A state title might actually qualify as modesty.

“It’s a great foundation of really, really good kids,” said Coach Tim Glancy. “I’m just so impressed with them and the way they handled themselves. We still have some growing up to do, but I appreciate their hard work.”

Glancy knows something special when he sees it, having coached state champs and also-rans since 1984 at Catholic, St. Joseph High School in Pine Bluff and MSM. His girls teams have finished in the money at state the past three seasons, but the boys program has had only spotty success.

His perseverance was rewarded this season with an embarrassment of underclassmen riches including Stearns, freshman doubles partners Henry Nolan and Steven Weeks and freshman singles phenom Margaret Lucas.

The young guns led the squad to an undefeated regular season and also won their respective conference titles. At state Oct. 19-20, all four medaled to land Catholic the team title and place Mount St. Mary second.

“I think we did well because we just had a lot of fun and we didn’t feel too much pressure,” said Brooke Buckner, senior co-captain. “I was really impressed when (the newcomers) came to tryouts. I just tried to pep them up this year. They would get so nervous. I tried not to let them get down on themselves.”

Buckner, a three-time all-stater, didn’t take a back seat to the youngsters, but naturally fell into the role of mentor, particularly for Lucas. The two bonded such that when they met in the conference finals, it was the low point of the season for both.

“I wasn’t very happy,” said Lucas, who won the match. “She’s one of my really close friends on or off the court and I didn’t like having to play her.”

Some of the youngsters’ success is by pedigree: Stearns and Lucas are the children of tennis pros and started batting balls around as toddlers. Weeks and Nolan started playing in grade school and first met during U.S. Tennis Association events, which all four of them play in addition to their high school teams.

With their dazzling technical skills, it would have been easy to miss the mental side of the game, but that’s precisely what Glancy homed in on. The tactic paid off at state when half of the team’s eight entries were knocked out in their first matches and Nolan and Weeks dropped the first set in their opener.

“Henry and Steven played Har-Ber (High School) and I don’t know how big those two guys were, but when I looked at them they were about 6’4” and 6’5”,” he said. “We were a little nervous and I just said, ‘Remember, David wasn’t that big and he beat Goliath.’”

The team would rally to win the close match only to walk into a bigger buzzsaw in the semifinals.

“We had to play Bentonville and they had about 200 kids there. It was crazy,” Nolan said. “I’ve never had to play in anything like that before. They knew my name, they were yelling my name, they were trash talking.  (Steven and I) just kind of focused on the match and focused on each other and when we started winning, they got a lot more quiet. That really helped out.”

After getting smoked 6-1 in the first set, the team settled down, hammering out the second and third sets each by the score of 6-4.

“We’re just really comfortable with each other. We know what the other likes to hit and what our good shots are and what our bad shots are and so we’ll kind of play around those strengths and weaknesses,” Weeks said. “I was at the net more often so Henry would serve at lot and I would just go after the ball at the net and put it away.”

While Stearns cruised to his singles gold medal — he lost just three games in three matches — Lucas scrapped for every step, winning in the quarterfinals 7-5, 6-1 before an epic 7-6 (7-8) 3-6, 7-6 (7-1) semis match. In the finals, she lost in straight sets to Adriana Carigova of Bentonville, who earlier disposed of Buckner in similar fashion.

The performance earned Lucas, Weeks, Nolan, Buckner and Stearns All-State honors and a hunger to get back and do it again next year.

“I didn’t even concentrate on conference at all; I just went straight on to state. My only goal was getting a ring and getting a state title for Catholic. We haven’t won since ‘99 so my main goal was to put a banner up there in 2015,” Stearns said. “I knew I could win singles and the doubles team is just freshman. I hope they play doubles again next year so they can defend, and we can just win again.”