Religious celebrate their jubilees in the Church 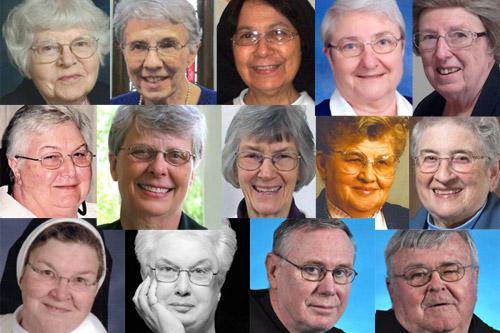 The annual Retirement Fund for Religious collection will be held Dec. 5-6 in the Diocese of Little Rock. Now in its 28th year, the appeal is coordinated by the National Religious Retirement Office and offers support for senior Catholic sisters, brothers and religious order priests whose communities lack sufficient retirement funding.

The Diocese of Little Rock contributed $163,960.05 to the 2014 collection, its highest total ever. In 2015, the Benedictines of Subiaco Abbey, Discalced Carmelite nuns in Little Rock and the Olivetan Benedictine sisters in Jonesboro received financial assistance from the Retirement Fund for Religious. Women and men religious who serve or have served in the diocese but whose communities are based elsewhere may also benefit from the annual collection.

The 2014 appeal raised $28.3 million, and the NRRO distributed more than $25 million in monetary support to 395 religious communities.

Sister Rose Ashour, 99, was born in Morrison Bluff and made first profession at St. Scholastica Monastery on June 24, 1935. She has the distinction of being the oldest and longest-professed member of the Fort Smith monastery.

She was an elementary school teacher for 39 years in Arkansas, Oklahoma and Missouri. She was a charter member of Our Lady of Peace Monastery in Columbia, Mo., St. Scholastica’s first daughter house. Sister Rose was a member there for 40 years until the monastery closed in 2010.

She is known for remembering the students she taught by name, for her faithful correspondence with her family, former students and friends, creativity in writing poetry, and her past expertise in pottery, wood carving and baking cookies and apple pies. She has a remarkable memory and is still able to recite poetry and sing all the verses of the Arkansas state song and “Stille Nacht” in German.

Sister Pierre Vorster was born during the Depression on a small farm on Cane Creek in the shadow of Subiaco Abbey.

“Benedictines are committed to a life of seeking God through prayer and work, with community prayer being the priority. My assigned work for 32 years was teaching in parish schools.”

After St. Anne High School closed in Fort Smith in the 1970s, she became involved in ecology and health care. She served as a board member of Project Compassion and was a charter member of Western Arkansas Area Agency on Aging. Sister Pierre was appointed by Gov. Bill Clinton to the Arkansas–Oklahoma River Compact Commission and to the Governor’s Advisory Council on Aging. Sister Pierre remains a dedicated member of the board for Area Agency on Aging.

Currently a retired educator, Sister Pierre serves the monastery as historian and grounds supervisor. She is an avid lover of birds, photography and playing cards.

Sister Rita May Killian, previously known as Sister Mary Fintan, has been a Sister of Mercy for 70 years teaching mostly mathematics in elementary and secondary schools, doing parish work, assisting in Mercy Retreat Center and working with the poor. Her ministry took her from Portageville, Mo., to St. Louis, Oklahoma City, Little Rock and Fort Smith, Meridian and Mound Bayou, Miss.

Sister Rita now lives in the Catherine McAuley Convent in Barling where she enjoys finding her way around Fort Smith, volunteering at Mercy Hospital, visiting nature centers, playing cards and mending clothes for the sisters.

Sister Madeline Clifton was born in Saint Vincent, a Catholic community of German and Swiss immigrants. Her mother was born in Switzerland.

She taught grade school for 20 years, focusing on first and second grades. For 31 years Sister Madeline worked as a chaplain at St. Edward Mercy Medical Center in Fort Smith. She is retired now and volunteers weekly as a chaplain visiting patients in hospice and other hospital floors. Currently, Sister Madeline works in the monastery dining room and performs other household duties.

“I am happy with the decision I made as a young woman and am grateful to God for my companions on the journey,” she said.

She writes poetry and loves music. She has a passion for children and is an advocate for animal rights.

Sister Rachel Dietz was born and raised in the Texas panhandle. She entered St Scholastica Monastery in 1952, made her first vows in 1955 and final vows in 1958. She earned a double bachelor’s degree in sociology and theology at Mundelein College in Chicago.

After receiving her master’s degree in clinical social work, she worked for Catholic Family Services in St. Louis and later opened a counseling practice at St. Pius X Parish in Tulsa, Okla.

After returning to Arkansas, she served as sub-prioress at St. Scholastica Monastery for 10 years. She is currently the director of St. Scholastica’s spiritual director formation program.

Sister Ann Hardcastle is a Little Rock native and graduate of Mount St. Mary Academy. She entered the Sisters of Mercy in 1955 and made her final vows in 1961. The first seven years of her profession was spent as a teacher in New Orleans, St. Louis and Little Rock. From 1968 to 1974 and 1979 to 1985 she worked at the Mercy Center in St. Louis with responsibilities in formation and education. From 1974 to 1979 she was a teacher and administrator in New Orleans. She returned to New Orleans from 1985 to 1990. She returned to teaching at her alma mater, Mount St. Mary Academy, in 1991. In 1996 she founded Catherine’s House, a program for pregnant and unwed mothers based in Little Rock. She is currently a board member and administrative assistant at the Family Development Center. She loves reading mystery novels and gardening.

Sister Jolitta Konecny was born in Slovak and entered the Sisters of Mercy in St. Louis in September 1955 after graduating from Mount St. Mary Academy in Little Rock. She graduated from Fontbonne College in St. Louis with a bachelor’s degree in business education. In 1971, Sister earned her master’s degree in secondary school administration from the University of Arkansas and received her clinical pastoral education from Santa Rosa Hospital in San Antonio in 1988.

Sister Jolitta is retired and lives at Mount St. Mary Convent in Little Rock where she works with the archives of the Sisters of Mercy in Arkansas.

Sister Margaret Meisner joined the Sisters of Charity of Nazareth in 1953. In 1955 she made her first vows in Kentucky. Sister Margaret received a bachelor’s degree in education, a master’s degree in religious education and received training in retreat and spiritual direction ministries. Over the years she worked in education, in parish religious education and in retreat and spiritual direction ministries. For the past 23 years she has ministered to patients at St. Vincent Infirmary Medical Center in Little Rock. Sister Margaret said the greatest blessing came out of her year of prayer in a hermitage that she built on a wooded hillside of a house of prayer in Butler, Pa.

Sister María Cruz De León, a member of the Carmel of St. Teresa of Jesus in Little Rock, was born in Panama. She joined a Franciscan order in 1965 and then 25 years ago she transferred to become a cloistered Carmelite nun in Little Rock. Sister María Cruz de León was elected prioress of the monastery in July.

After 11 years Sister Anita moved to Rogers to minister within the health care system, providing education and formation around Mercy’s heritage, mission and values to physicians and employees when St. Mary Hospital joined the Sisters of Mercy Health System. She currently works with mission services/administration within Mercy Health System in northwest Arkansas.

Her commitment to God through her vows as a Sister of Mercy has taken her to schools in Mississippi, Louisiana, Missouri and Arkansas, where she moved in 1990 when she became to pastoral associate at Our Lady of the Holy Souls Church in Little Rock. In the Diocese of Little Rock, Sister Lee Ann has given her time to parish needs, classroom teaching, the founding of a spirituality center, and the founding and development of the Center for Women in Transition, which helps women successfully transition back into society from incarceration. After 25 years here, she is moving to Belmont, N.C., to become the community life coordinator at Sacred Heart Convent.

Brother Jude Schmitt received his elementary education at St. Boniface School in Fort Smith and graduated from Subiaco Academy in 1962. He entered Subiaco Abbey’s novitiate in 1964 and made his first profession of vows on Sept. 8, 1965. He then continued his college education at St. Louis University, earning a bachelor’s degree in history.

Brother Jude spent the greater part of his monastic life in service to Subiaco Academy as teacher, dean, audio visual supervisor and technician, locksmith and as the director of the abbey and academy technology and computer systems. As a teacher, Brother Jude taught social studies, sciences, religion, computer and technology courses. Brother Jude’s greatest love in teaching was in the areas of science, technology, carpentry and woodworking. Brother Jude attributed his enthusiasm for the sciences in particular to his high school chemistry teacher, Father Brendan McGuire, OSB.

In his spare time, Brother Jude enjoys spending time with his confreres, carpentry and woodworking, playing guitar or banjo, hiking and camping.

Brother Adrian Strobel received his elementary education at St. Benedict School in Subiaco and graduated from Subiaco Academy in 1962. He entered the novitiate of Subiaco Abbey in 1964, professed first vows in 1965 and graduated from St. Bernard College in Alabama in 1968.

He received the Headmaster’s Award for Distinguished Service for the 2009-2010 school year. “I have always had a deep love for Subiaco and our mission, and I want to live the Gospel by helping any way I can,” he said.

Brother Adrian enjoys planting crops, gardening, helping on the abbey farm and attending athletic events. He is a big fan of the Subiaco Trojans, Arkansas Razorbacks and St. Louis Cardinals.

Sister Mary Josita Lopez was born in New Iberia, La. She first began thinking about religious life in 1966. While working as a nurse, she worked with two Olivetan Benedictine sisters and recalled that “something was missing” in her life. After prayer and discernment, she found that “something” when she entered Holy Angels Convent in Jonesboro in 1988.

Sister Josita professed first vows in 1990 and final vows in 1995. During her time at Holy Angels she has worked in nursing at St. Bernards Medical Center and Hispanic ministry. She has taught religious education classes in Wynne, Pocahontas and Paragould and Bible school in Searcy and Weiner. She has served as community infirmarian, kitchen manager and cellarer (a person who provides food and drinks), the position she currently serves.

The annual Retirement Fund for Religious collection will be held Dec. 5-6 in the Diocese of Little Rock. Now in its 28th year, the appeal is coordinated by the National Religious Retirement Office and offers support for senior Catholic sisters, brothers and religious order priests whose communities lack sufficient retirement funding.

The Diocese of Little Rock contributed $163,960.05 to the 2014 collection, its highest total ever. In 2015, the Benedictines of Subiaco Abbey, Discalced Carmelite nuns in Little Rock and the Olivetan Benedictine sisters in Jonesboro received financial assistance from the Retirement Fund for Religious. Women and men religious who serve or have served in the diocese but whose communities are based elsewhere may also benefit from the annual collection.

The 2014 appeal raised $28.3 million, and the NRRO distributed more than $25 million in monetary support to 395 religious communities.