Understanding why the pope declared a Year of Mercy

Holy year’s theme comes from Luke 6:36, 'Be merciful as your Father is merciful' 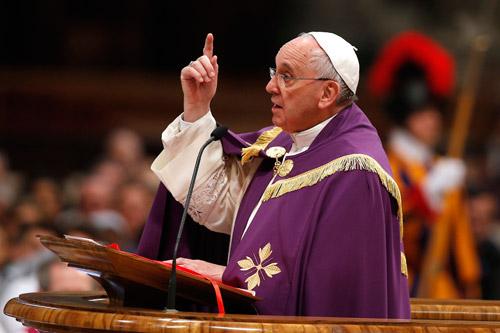 CNS / Paul Haring
Pope Francis gestures as he preaches during a Lenten penance service in St. Peter's Basilica at the Vatican March 13, 2015. During the service the pope announced an extraordinary jubilee, a Holy Year of Mercy, to be celebrated from Dec. 8, 2015, until Nov. 20, 2016.

CNS / Paul Haring
Pope Francis gestures as he preaches during a Lenten penance service in St. Peter's Basilica at the Vatican March 13, 2015. During the service the pope announced an extraordinary jubilee, a Holy Year of Mercy, to be celebrated from Dec. 8, 2015, until Nov. 20, 2016.

The Holy Father Pope Francis has chosen a theme for the jubilee year that is close to his heart: mercy.

“Dear brothers and sisters, I have thought about how the Church can make clear its mission of being a witness of mercy,” he said. “It’s a journey that starts with a spiritual conversion. For this reason I have decided to declare an extraordinary jubilee that has the mercy of God at its center. It will be a Holy Year of Mercy.”

The biblical passage for the holy year’s theme comes from Luke 6:36, in which Jesus tells his disciples, “Be merciful as your Father is merciful.”

Pope Francis said, “I am convinced that the whole Church will be able to find in this jubilee the joy of rediscovering and making fruitful the mercy of God, with which we are all called to give consolation to every man and every woman of our time.”

Mercy is the central topic of the pope’s episcopal motto “miserando atque eligendo.” One translation of motto, taken from a homily given by St. Bede on Jesus’ calling of St. Matthew, is “with eyes of mercy.” In his first Angelus address on March 17, 2013, he spoke of “feeling mercy ... this word changes everything.”

Mercy “is the best thing we can feel: it changes the world,” he said. “A little mercy makes the world less cold and more just. We need to understand properly this mercy of God, this merciful Father who is so patient.”

Access to the sacrament of confession should be expanded by having parishes open their doors for extended periods with priests available. Sunday readings during Ordinary Time for the holy year will be taken from Luke’s gospel, who is known as “the evangelist of mercy.” Luke’s mercy stories include the lost sheep, the lost coin and the merciful father.

Doors of mercy will be opened in Rome and worldwide. Each of the four papal basilicas in Rome has a holy door, which are sealed shut from the inside so that they cannot be opened. The doors are only opened during jubilee years so that pilgrims can enter through them in order to gain the plenary  indulgence during the jubilee year.

The rite of the opening of the holy door is intended to illustrate the idea that the Church’s faithful are offered an “extraordinary path” toward salvation during a jubilee.

As an ancient Hebrew tradition, the jubilee year was celebrated every 50 years to restore equality in Israel by providing opportunities for families who had lost their property and personal freedom to regain them, and the wealthy were reminded that their Israelite slaves would again become their equals and regain their rights.

The holy year tradition in the Church began with Pope Boniface VIII in 1300, and since 1475 an ordinary jubilee has been celebrated every 25 years in order to allow each generation to experience at least one during their lifetime. An extraordinary jubilee, such as the Year of Mercy, can be called for a special occasion or special event.

The holy year is traditionally a year of forgiveness of sins and also for the punishment for one’s sins. It is also a year for reconciliation between enemies, conversion and confessing sins.

The first extraordinary jubilee was held in the 16th century, and the most recent one was held in 1983 when St. John Paul II proclaimed one to honor 1,950 years of redemption.

Pope: a vocation is a calling from our friend Jesus