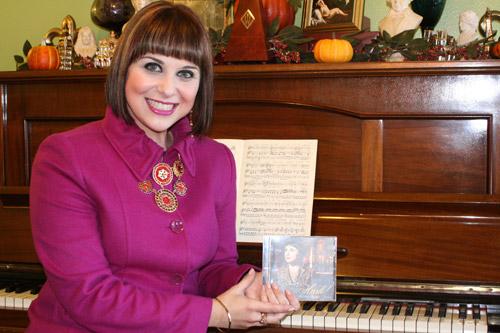 By the world’s standards, Christine Westhoff is an internationally known soprano, specializing in oratorio and sacred music. However, the 34-year-old Catholic views her profession as a calling, a chance to pray for a living.

“If I can touch one soul in the entire audience to turn their heart towards God and to allow God into their life even for that one second and turn their heart, I’ve done my job,” Westhoff said. “It is amazing to be on the other side of that. I get very wrapped up in what I’m singing, so my song turns into my prayer.”

Westhoff, a member of Our Lady of the Holy Souls Church in Little Rock, has been blessed to share her songs of praise to God with the masses with her album “Ora Pro Nobis” and her Christmas CD “Hark!” with classics like “O Holy Night” and others, including “Once In Royal David’s City.” Next year, she will release “Body and Soul,” an album of Italian arias, and “Te Deum,” an album of hymns.

“I came from such a strong Catholic faith-based home, I have a cousin who is a priest in Kenya, I have all these ties to Catholicism,” Westhoff said, adding she sings for God. “If he gave me this voice then I was going to give it all back to him.”

She moved to Little Rock in 2008, after her husband of 11 years Timothy Allen, a British organist and composer, moved here for work. He is currently the church organist and choir master at St. Mark Episcopal Church. They have one 6-year-old daughter, Cecilia, named after the patron saint of music.

“The three of us will sometimes go into the music room after dinner and put on little concerts, so that’s fun,” she said.

Westhoff was just a few years older than her daughter is now when at the age of 9, she was already considered a prodigy.

“I was 8 and I had been giving a solo for ‘O Holy Night’ at St. Joseph’s grade school in Freeburg, Ill. I sang this solo and this woman came up to my mom and said, ‘You are going to do something with her aren’t you,’” Westhoff said, adding her vocal training began soon after. “We had a huge balcony at our house and I used to put on operatic concerts on the balcony, but it was always Catholic hymns.”

At 11, she studied with college professors but was quickly expected to do opera music. When she got older, she studied at Washington University in St. Louis with Christine Armistead and was ready to leap into a professional singing career.

“I was in college and when you sound like an opera singer they kind of just put you in a box. Everybody just expects this to happen,” Westhoff said. “I thought if I have to sing opera for my living, it had no real substance to me. While it’s beautiful and I appreciate it, I wasn’t called to do that.”

Luckily, God had other plans, she said.

“It was a divine providence moment. My husband and I are both musicians and I had stumbled upon an oratorio book in his office and I thought this is it,” Westhoff said. “I pretty much thought this was a big sign from God and that’s what he wanted me to do.”

Oratorio music involves pieces based on a religious or Biblical event.

In 2011, “Ora Pro Nobis” gained her international attention in places like Europe, Australia, Japan, Iceland and New Zealand. She included beloved music pieces on the album, including “Oh Divine Redeemer,” “Ave Maria” and her favorite, “Laudate Dominum” by Mozart.

“It was surprising the response it had. People want this,” Westhoff said. “People want to be nourished by the arts and by music and, of course, if you’re Catholic, this makes sense. It’s a nice part of prayer and meditation.”

Her success has allowed her to perform in several venues, including at cathedrals in Ireland and England, various dioceses in the United States and a series of recitals on BBC radio. She has had several performances in Arkansas, including at the Clinton Presidential Library for the commemoration of the 9/11 terrorist attacks.

“I have a real good gig because my office has become these great huge cathedrals and sacred spaces,” Westhoff said. “The one that stands out for me most is San Silvestro Chapel in Rome. Of course you’re surrounded by pieces of artwork that are just unbelievable, and I have the privilege of singing there and glorifying God.”

But for Westhoff, it’s primarily about the lives that are touched from the music.

“I had a woman a few years ago at a concert who said some of the pieces that were sung were her husband’s favorite pieces and, of course, he passed away quite a few years ago in a tragic accident, and it was a really prayerful time for her because I think at the time no one could come in to do the funeral music,” Westhoff said. “So I felt very honored I could give her a sense of peace.”

Being a professional singer takes more than just showing up at a church or concert venue. Westhoff sings an hour or two every day and said her work is a full-time commitment between preparation and travel. Her husband often accompanies her at her concerts and does a lot of her musical arrangements.

“This is all very planned and prepared, and they’re long hours,” Westhoff said. “Concerts are very physical; I’m a very physical singer so you use all of your muscles and it’s full of adrenaline.”

When she is home, Westhoff enjoys participating in the Evangelical Catholic program at Holy Souls on Wednesdays.

“It’s about getting others involved in the parish in Catholic life and spreading the good news of God through evangelization,” she said.

Her albums are available for $10 on iTunes, Amazon.com or through her website at christinewesthoff.com. Westhoff will perform at St. Paul Episcopal Church in Newport at 7 p.m. Dec. 14 and with the Arkansas Symphony Orchestra for their Holiday Pops concert at Pulaski Academy Connor Performing Arts Center in Little Rock at 7:30 p.m. Dec. 18 and 19 and 3 p.m. Dec. 20. Tickets can be purchased at the door or online.

Accident turned life upside down, but faith helped him