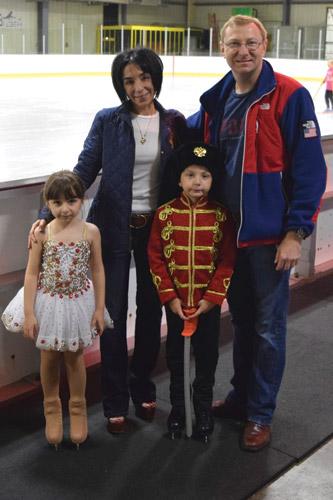 The Malakhov family steals a moment before the start of a competition. Russian-born Alexey teaches at the University of Arkansas and Angie, a Chicago native, formerly taught at Northwestern University.

The Malakhov family steals a moment before the start of a competition. Russian-born Alexey teaches at the University of Arkansas and Angie, a Chicago native, formerly taught at Northwestern University.

Even in our hyper-competitive, open-all-night world, it’s still not often that you can say a first-grader has achieved remarkable balance in life. But in summing up Peter Malakhov, that’s precisely the word that’s brought to mind.

Peter, who attends St. Joseph School in Fayetteville, is all about balance. It’s key to his figure skating, perched as he is over a blade less than a quarter of an inch wide. And, balance fuels his many other interests ranging from academics to the arts, helping him take the pressure of his demanding sport in stride.

“I just sit and wait on the benches,” he said, explaining how he doesn’t get nervous. What was the hardest thing to learn?

“A one-foot spin,” he chirps, adding quickly that it’s not a problem anymore.

“He was fearless and he still is,” said his mother, Angie. “Most kids grab the wall; he just went for it out there.”

Peter asked his mother for the chance to try ice skating about two years ago. At the time, Angie saw the activity as good exercise, but a couple of lessons in, it was clear Peter wasn’t your typical beginner.

“Peter is simply amazing,” said his coach, Robin Aprea of Ozark Figure Skating Club at The Jones Center in Springdale. “To be so young and so talented is remarkable. He has amazing speed and power on the ice. He is fearless. The only thing that we work on is slowing him down a bit so that he can focus on mastering new elements.”

Peter’s natural skill has made him the talk of his team as well as other area coaches and competitors. Over the past year alone, he participated in the Diamond State Open in Little Rock; the Pigtail Classic and Ozark Invitational in Springdale and the Arctic Edge Open in Oklahoma City.

He saved his signature performances for the Pony Express Competition in St. Joseph, Mo., Sept. 18-20 when he overcame a 102-degree temperature to win three medals, including gold in the solo compulsories.

Aprea, who’s coached enough kids to know a specimen like Peter doesn’t come along every day, is planning even more competitions next season, in places like Dallas, Kansas City and Memphis.

“He has amazing charisma on the ice,” she said. “The judges love him and always find me after he competes to compliment his skating and his performance.

“The key to success is practice. Peter’s mom does a fantastic job of getting Peter and his sister to the rink to practice several times each week.”

Three days a week for two hours each practice, in fact, plus time with his secondary coach, Annacaye Kichey who works presentation and choreography. He and his little sister Tatiana also take gymnastics training to strengthen the core muscles for jumping. Angie’s a constant presence at these sessions.

“I was more hands-on before, but as I see he’s advancing, I’m pulling back,” she said. “First you want to make them love it … and once they taste success, you don’t have to be on top of them. I’m not a hover-parent; once he loves it, then it’s his game.”

Detail- and achievement-oriented though she may be, Angie is hardly a typical skate mom. She encourages both Peter and Tatiana to give skating their all, but there’s no question where her true priorities lie.

“I told him, ‘You have to be number one in school, you have to be a straight-A student, if you want to continue to skate,” she said. “We’re either studying hardcore or skating hardcore. This kid is resilient; he wants to keep doing it.”

That incentive, and one-on-one academic work with Angie, have paid off:  At 6, Peter has a fourth-grade math aptitude and Tatiana, not yet in school, is at a second-grade level. They also enjoy art field trips to nearby Crystal Bridges Museum of Art.

“I think it’s family bonding,” she said. “When he’s on the ice, I’ve never left him at the rink and not been there. It’s all three of us on the ice, six hours a week. It’s a huge family commitment. We almost live there.”

The Malakhovs, which also include dad, Alexey, attend St. Joseph Church in Fayetteville when they aren’t attending their native Greek and Russian Orthodox church. Besides winning skating medals, Peter likes to paint and do math, he says, “because it’s hard.”

He said he’d like to win an Olympic medal one day too, a task harder and with bigger pressures than he can probably fathom at this stage of life, a stage where the little things still matter most.

“(What I like best is) skating with my mom,” he said. “Because it’s nice to skate with my mom and talk to her on the ice.”