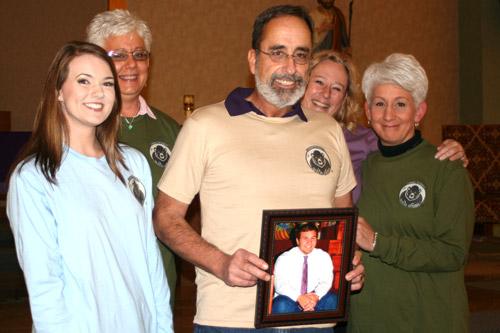 Aprille Hanson
JoeBear Apparel was established in memory of Joe Batchelor, 19, who was killed in a car crash in 2014. Pictured are Kayla Pruitt (left), Natalie Beck, Lisa Bates and parents Ray and Celeste Bailey (holding photo of Joe).

Aprille Hanson
JoeBear Apparel was established in memory of Joe Batchelor, 19, who was killed in a car crash in 2014. Pictured are Kayla Pruitt (left), Natalie Beck, Lisa Bates and parents Ray and Celeste Bailey (holding photo of Joe).

CONWAY — Joe Batchelor was nicknamed “The Bear” for more than just his towering 6-foot, about 300-pound figure. He was a kind-hearted “teddy bear,” whether he was playing with the children at Conway Fitness Center Daycare in Conway where he worked for about six months, cuddling with his high school sweetheart Kayla Pruitt, happily eating anything put in front of him, joking around with his buddies or just being his typical, easy-going self.

“Every morning before he left he would come find me wherever I was at and give me a kiss on the cheek and say, ‘I love Mom,’” Celeste Bailey said. “That was the last thing he said to me on that morning that he left.”

Batchelor, 19, a parishioner of St. Joseph Church in Conway and student at the University of Arkansas Community College at Morrilton, was killed Oct. 18, 2014, following a Razorback game at War Memorial Stadium when the vehicle he was riding in overturned in Little Rock. Two others were injured in the crash, the result of speeding and drinking.

On the one-year anniversary of his death, Batchelor’s parents, girlfriend, aunt and godmother Natalie Beck and family friend Lisa Bates, who owns Imprint Arkansas shirt shop in Conway, established JoeBear Apparel, which donates proceeds from shirt sales to Alzheimer’s disease causes. The group is working on establishing it as a nonprofit.

On the day Batchelor died, he spoke candidly to his lifelong friend Drew Bates, Lisa’s son, about making shirts to raise money for Alzheimer’s research in honor of his grandmother he affectionately called Nonna, who is still struggling with the disease.

“Celeste ... told me her biggest fear was everybody was going to forget about Joe and that broke my heart,” Bates said. “So I think this is one way to help fix that.”

The shirt line features a large graphic of a bear with a hat on backwards, the way Batchelor used to wear them. The designs have his initials, AJB, Celeste Bailey said. The graphic and some of the ones to follow were drawn by his cousin, Celia Hampton, an artist in Texas.

“We decided we wanted a bear, but we wanted it to kind of look like Joseph,” his mother said. “The first one she came up with was a very realistic looking bear and she got his eyes perfectly. That’s going to be on the next shirt.”

Each shirt is 100 percent cotton, organic, made in the U.S. and tagless, because Batchelor “hated” tags.

“His idea was to have some shirts that had the name ‘Southern Memories’ on them and different scenes he and Kayla talked about,” Bates said. “She’s got some designs that are definitely going to be on the southern memories shirts.”

So far, about $2,800 has been raised by just word of mouth and social media since the website launched in early November, a testament to the St. Joseph community and the impact that Batchelor had on everyone he met, his family said.

A 2013 graduate of St. Joseph High School, Batchelor was smart, had a love for the arts, writing, Harry Potter and had just a few priorities in life.

“He couldn’t get enough of two things — food and her,” his stepfather Ray Bailey said, pointing to Kayla. “Joe desperately pined after her for over a year … there wasn’t going to be anybody else.”

Pruitt, now 21, said Batchelor was her best friend even before they dated and always treated her with respect.

“He went to church every Sunday,” Pruitt said. “He showed it (his faith) in his actions, the way he carried himself and cared for others so strongly,” Pruitt said.

While the family hopes JoeBear Apparel grows into something beyond just shirt sales, the true legacy of their son is in the hearts of those who loved him.

“I know we tend to glorify people when they go, but there’s no need to exaggerate. This was just how he was … People who know Joe will believe that,” Ray Bailey said. “We were just blessed.”

To order a shirt, visit joebearapparel.com.