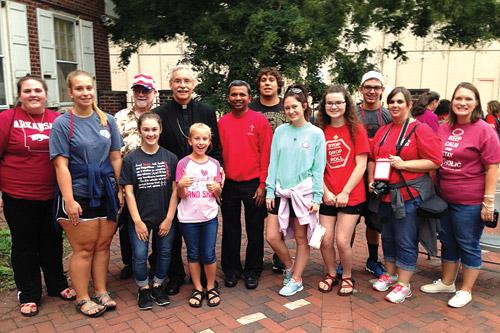 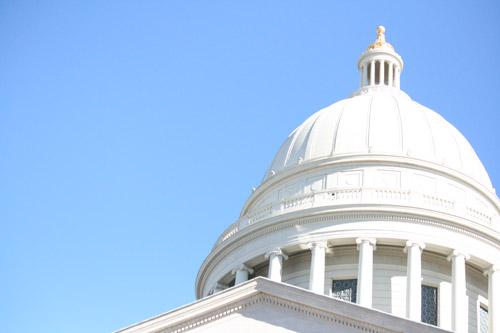 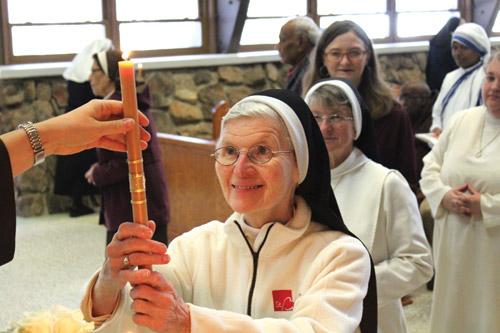 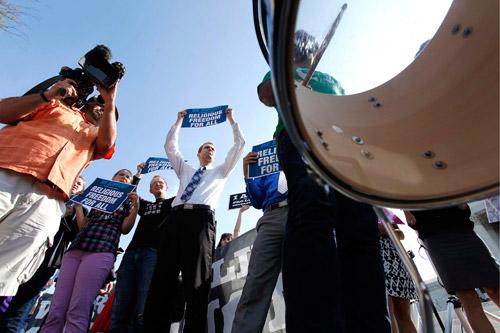 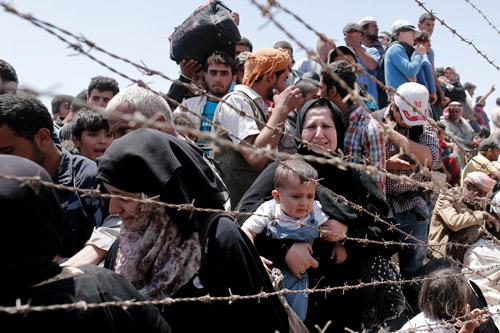 A look back at Catholic news statewide, globally in 2015

Catholics in Arkansas got to see Pope Francis, take part in Year of Consecrated Life 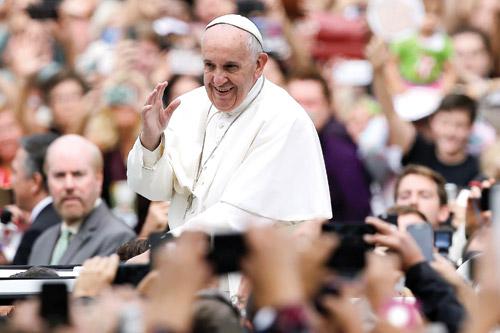 CNS / Matt Rourke, pool
Pope Francis waves to the crowd as he makes his way to celebrate the closing Mass of the World Meeting of Families in Philadelphia Sept. 27. His visit to the United States began in Washington, D.C., Sept. 22 and included time in New York.

CNS / Matt Rourke, pool
Pope Francis waves to the crowd as he makes his way to celebrate the closing Mass of the World Meeting of Families in Philadelphia Sept. 27. His visit to the United States began in Washington, D.C., Sept. 22 and included time in New York.

“In 43 years, teacher forms generations in West Memphis; Sarah Wilbanks, a Baptist, spent her entire teaching career in one Catholic school” (May 2)

Search “Arkansas Catholic” on Facebook to see the 10 most-read stories of 2015.

#Pope on his #Bible: “It has seen my joy and has been bathed by my tears: it is my priceless treasure.” (Dec. 3)

Lights in the Darkness

Catholics around the state and worldwide were filled with hope in 2015. It was not the hope that comes out of positive situations because like most years, the imperfect world experienced much evil and darkness. But it was a hope that comes from God. A hope in safe travels for Pope Francis who spread Jesus’ message globally, a hope that people would put the needs of their fellow man before their own agendas and a hope for a new generation of people called to religious life to lead the Church into the future.

It was a year filled with parish celebrations, the promise of eternal life, parishioners that inspire us and statewide, international and global headlines that called us to defend and act on our faith.

It was a time to reflect on Arkansas Catholic’s theme, “Your Faith is Worth It” and it was proven again and again by the faithful. Here are the five key moments for the year that showed the hope and zeal of the Church at home and abroad.

For the first time in his more than two years as pontificate, Pope Francis visited the United States from Sept. 22-27. It was the first time the now 79-year-old pope had ever been to America and it was anything but relaxing. The whirlwind six days consisted of stops in Washington, D.C., New York City and Philadelphia. He spoke with Congress (the first pope ever to do so), participated in a multi-religious service at the 9/11 Memorial and Museum, canonized Blessed Junipero Serra in a Mass at the Basilica of the National Shrine of the Immaculate Conception, participated in festivities at the World Meeting of Families and celebrated Mass at Madison Square Garden.

Hundreds of people from Arkansas made the 1,000-plus mile pilgrimage to see Pope Francis, including Bishop Anthony B. Taylor, the 12 seminarians at the House of Formation in Little Rock and parish youth groups from cities like Little Rock, Fort Smith and Springdale.

On the Benjamin Franklin Parkway where tens of thousands gathered to hear him speak, Pope Francis tossed aside his prepared text to be candid about families in the world today, saying, “Families have a citizenship that is divine. The identity card that they have is given to them by God so that within the heart of the family truth, goodness and beauty can truly grow.”

Death took center stage in Arkansas this year, as Senate Bill 298 was proposed to abolish the death penalty in the state. It was the first time that the bill passed a committee, said Sister Joan Pytlik, DC, who led the legislative committee of the Arkansas Coalition to Abolish the Death Penalty. It took two years to draft the bill, but it was not put before the state Senate for a vote. In fact, alternative concepts not in line with Church teaching were proposed, including House Bill 1473 which offered firing squads rather than lethal injection.

Instead, Gov. Asa Hutchinson ordered the execution of eight death row inmates in October. Arkansas has not executed a prisoner since 2005. Bishop Anthony B. Taylor appealed to the state legislature to abolish the death penalty in a Sept. 4 statement, saying, “I know you often hear Catholics talk about the sanctity of life in the context of abortion, so today I need to emphasize two obvious things: 1) life does not cease to be sacred once the baby is born, and 2) no one will be fully secure until we reject everything that threatens human life or degrades human dignity.”

In addition to Bishop Taylor, Pope Francis, through Archbishop Carlo Maria Vigano, apostolic nuncio to the United States, asked for the governor to spare the eight lives. The executions were postponed because of a lawsuit filed by the inmates, demanding identification of manufacturers of drugs to be used in the executions. State law allows the Department of Correction to withhold the source of the execution drugs, which have already been bought by the state and are pegged at more than $24,000.

Lawyers for the state and the inmates were told to submit written arguments to the Arkansas Supreme Court by Dec. 14.

Pope Francis dedicated a special year, the Year of Consecrated Life, to run through Feb. 2, 2016, on the World Day of Consecrated Life. The year was meant to call attention to religious life, for those interested in responding to God’s call but also for the Catholic faithful to learn more about what it means to live a consecrated life for the Church and to pray for those following it.

According to Catholic News Service, the year coincided with the 50th anniversary of the decree on religious life, “Perfectae Caritatis” and with Vatican II’s Dogmatic Constitution on the Church “Lumen Gentium.”

On Feb. 14, Bishop Taylor concelebrated Mass at the Carmelite Monastery in Little Rock, both recognizing the Year of Consecrated Life and the fifth centenary of St. Teresa of Avila’s birth. About 75 men and women religious from throughout the state attended the Mass.

The Diocese of Little Rock created a commission on consecrated life to raise awareness, led by Sister Joan, minister for religious, that consisted of department directors and Church organizations. Catholic Schools also did activities surrounding vocations, including a vocations day for fifth-grade Catholic school students.

On April 2, the Arkansas Religious Freedom Restoration Act became law, mirroring a 1993 federal law. Controversy surrounded the original bill, as opposing groups said it went too far and could discriminate against homosexuals.

Gov. Hutchinson refused to sign the initial bill, asking it to instead be amended to mirror the federal law. The law prohibits the state government from substantially burdening a person’s ability to practice their religion. The law was put in place two months before the United States Supreme Court ruled that same-sex unions are recognized marriages under American law.

Bishop Taylor agreed with the passage of the amended religious liberty bill, emphasizing that once the changes were made, it was “passed and signed with scarcely an objection.”

He went on to defend the bill, saying: “There are some who view the Arkansas Religious Freedom Restoration Act as an attempt to condone invidious discrimination against LGBT persons based on religious beliefs, which the Catholic Church strongly opposes and which the Arkansas Religious Freedom Restoration Act does not in fact do. Choosing not to participate in certain ceremonies or activities due to religious convictions is not discrimination against the persons involved, nor is it necessarily an expression of hatred toward the persons involved. Rather, it is very simply a choice to abstain from participating in conduct or actions that may be irreconcilable with one’s sincere religious beliefs, and it is the right to abstain from these actions which the Arkansas Religious Freedom Restoration Act seeks to protect.”

Widespread questioning of U.S. practices for refugee resettlement were brought to the forefront after the Nov. 13 terrorist attacks at multiple venues in Paris that killed 129 people. Misconceptions began to follow, with at least 20 state governors stating they will no longer accept Syrian refugees for fear of links to terrorism. Though the decision is ultimately controlled by the federal government, Catholic Charities of Arkansas stepped forward to share the truth about the successful refugee resettlement program that is in place through the Church.

Patrick Gallaher, executive director of CCA, released a statement explaining what the organization does to assist refugees: “Since the mid-1970s, the Diocese of Little Rock, through Catholic Charities of Arkansas, has helped to resettle refugees. Currently, refugees approved by the U.S. Department of State can be referred to Arkansas for resettlement.”

Refugees, by definition, live in fear of significant harm or death because of persecution or war. The Catholic Charities Refugee Resettlement Office works with the U.S. Conference of Catholic Bishops’ Office of Migration and Refugee Services. There is a 13-step vetting process that refugees must go through to be approved for entrance to the United States, according to the U.S. Committee for Refugees and Immigrants.

In 2015, CCA assisted 12 refugees as of November, all from Myanmar, known previously as Burma.

Amena Al Nadawi, an American citizen and Iraqi refugee now living in Little Rock with her daughters, told Arkansas Catholic in November, “I am so thankful to these people,” adding her case worker at CCA is her “angel in the U.S.A. Really we are lucky to have met this woman and she was so helpful to me. I felt safe.”

“In 43 years, teacher forms generations in West Memphis; Sarah Wilbanks, a Baptist, spent her entire teaching career in one Catholic school” (May 2)

Search “Arkansas Catholic” on Facebook to see the 10 most-read stories of 2015.

#Pope on his #Bible: “It has seen my joy and has been bathed by my tears: it is my priceless treasure.” (Dec. 3)

Lights in the Darkness